David Celsi is a dear friend of mine and an amazing artist. His work appears in  the New York Times, Dark Horse Comics, and a ton of other publications. But he also does this thing — the 24 hour comic — in which he creates a comic from start to finish in 24 hours. Lots of comic artists do this, but David’s are funny, irreverent, and striking. This volume, from Dark Horse Comics, gives you a chance to see comics in the raw. Dive in. It’s fascinating and wonderful. 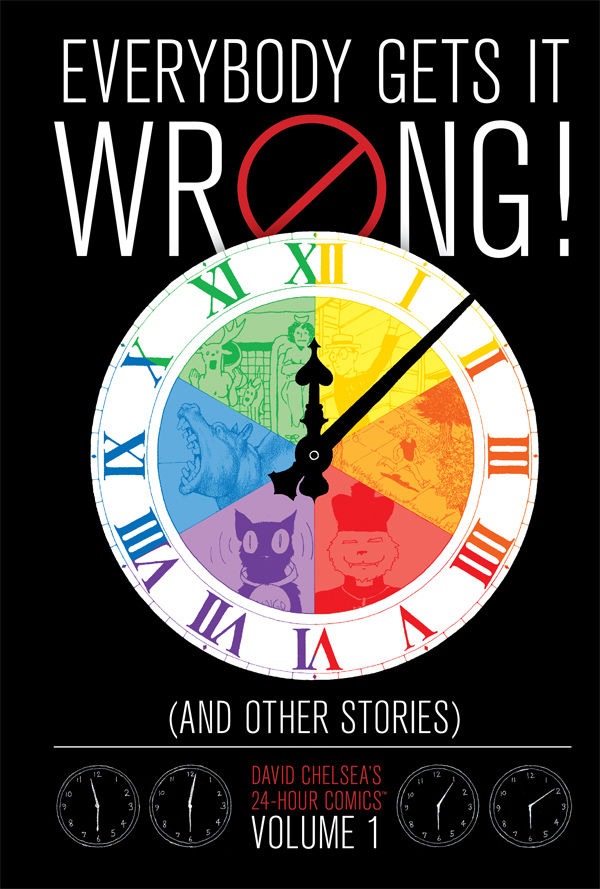 My new book, EVERYBODY GETS IT WRONG! (AND OTHER STORIES): DAVID CHELSEA’S 24 HOUR COMICS VOLUME 1, published by Dark Horse, collects the first six (out of sixteen so far) 24 hour comics I have drawn. The 24 Hour Comic challenge was devised by Scott McCloud, the author of UNDERSTANDING COMICS: to draw an entire comic book in a single day, at the rate of one page an hour.

I drew my first 24-Hour Comic mostly as a vacation from artist’s block. I had been wrestling for some time with plans for an ambitious graphic novel, basically getting nowhere. Eventually I decided it was time to do something drastic to prove to myself that I could actually complete something, so I invited some cartoonist friends over for a “24 Hour Comics” session in May 2004. All in all, that first experience worked out far better than I would have expected, and in the years since I have tried to meet a self-imposed quota of one or two a year.

Of the stories in this collection, JESUSLAND is my personal favorite, even though it is somewhat dated. It was drawn just after the 2004 Presidential election, when Democrats like me were in shock and awe at how Republicans had mobilized the Evangelical vote to give George W. Bush a second term. Since that election had been fought so much in religious terms, I fantasized that it would be followed by another one to choose a State Religion, with the leading contenders being the Catholic Church and its historic enemy Evangelical Protestantism (never mind that the two groups had been on the Republican side in the last election- I wanted them back at each other’s throats).

In depicting the characters, I borrowed a device from Art Spiegelman’s MAUS. Each religious group was personified as a different animal- Catholics were cats, all varieties of Protestant from Anglicans to Unitarians were rabbits, Jews were mice (just as in Maus), Atheists were apes (one wears a Darwin t-shirt), and Scientologists were space aliens. I was never able to come up with a suitable animal to represent Mormons, so they don’t appear.

While having fun satirizing a number of tempting targets, including then-President Bush, Pope Benedict, and the hubbub over the Terry Schiavo case, I was also able to make a number of serious points, one of which I put into the mouths of two members of the most marginalized and ridiculed religious groups of all, the Jehovah’s Witnesses: that Christians ought to be opposed to democracy in principle because when Pilate put it to a vote, the mob chose Barabbas over Jesus.

In this scene I take aim at Scientology and Mel Gibson’s brand of hyper-conservative Catholicism. The blackmailing tactics employed by Travolta and Cruise simply reflect a longstanding rumor about Scientology; the obscure detail I’m particularly proud of is that Gibson happens to be directing a film called The Prioress’s Tale. At the time, Mel’s Jesus movie The Passion Of The Christ had just been released and was being widely criticized for its supposed Anti-Semitism; I figured it would be logical for him to follow up with a classic tale of Jewish villainy from literature. Chaucer fans will of course recognize the Canterbury Tale of a Christian child stoned to death by Jewish villagers, which has embarrassed scholars for centuries, and is still considered so offensive that it is often censored out of modern editions. (In the real world, Mel Gibson followed up The Passion of The Christ with Apocalypto, a bloody story set in Pre-Columbian Peru that nobody remembers.)

The Prioress’s Tale recurs later in the story as a movie poster on a wall, graced with an approving quote from conservative pundit Michael Medved: ”You’ll scream for blood!” 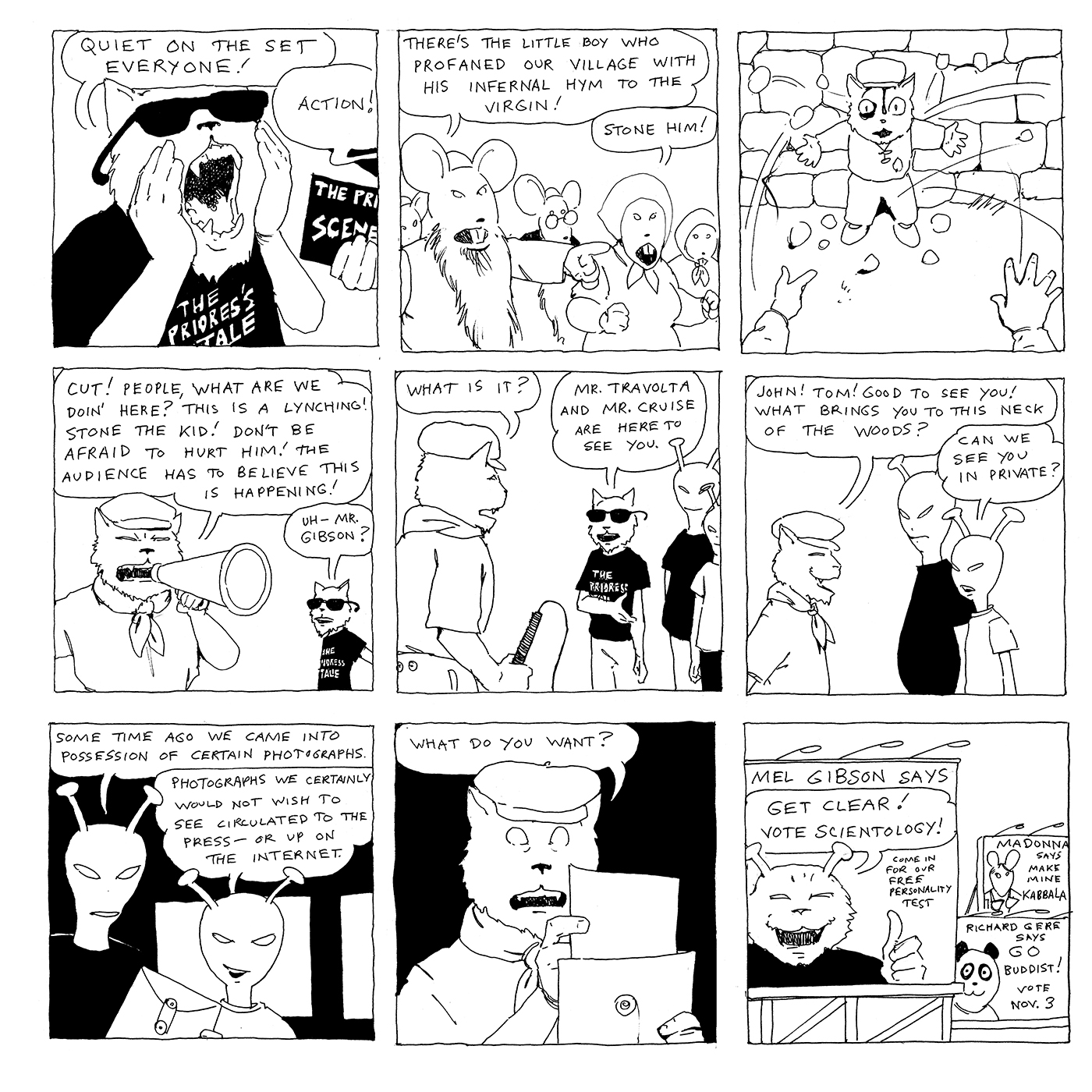 David Chelsea grew up in Portland, Oregon, and later moved to New York City for a spell. His comics and illustrations have appeared in numerous publications, including the New York Times, the New York Observer, and Portland Monthly. He is the author of the graphic novels David Chelsea In Love and Welcome To The Zone and the how-to book Perspective! For Comic Book Artists and its sequel Extreme Perspective!

David now lives with his wife Eve, son Benjamin, daughter Rebecca, a cat, and a snake in a big house in Portland’s historic Irvington neighborhood.

David has completed sixteen 24-hour Comics stories to date, a world’s record until someone tells him different. A collection of the first six, EVERYBODY GETS IT WRONG! (AND OTHER STORIES): DAVID CHELSEA’S 24 HOUR COMICS VOLUME 1, was recently published by Dark Horse.