Look! A new Thieftaker book. I am so enjoying D.B. Jackson’s historic fantasy series. It’s set in pre-Revolutionary War Boston and isn’t just historic fantasy, but is a full on mystery novel. Such fun.

I am also intensely jealous of his covers, which perfectly capture the tone of the novels. Look how gorgeous this is. 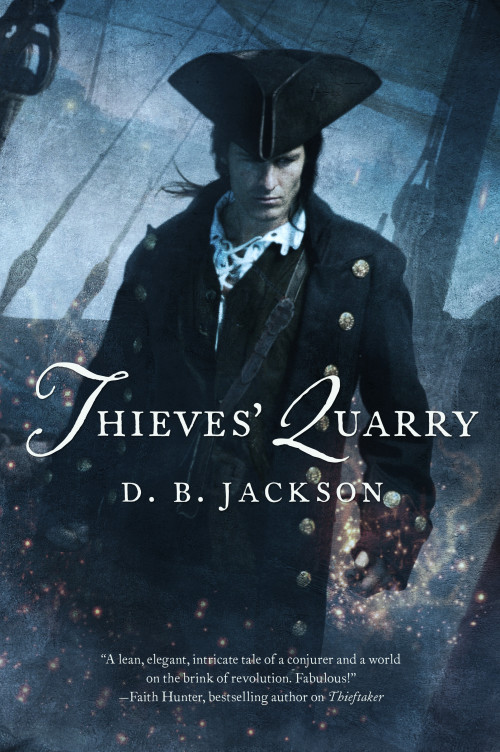 When I write about writing, I often point to character as the single most important element of storytelling. Characters with depth, characters who connect with readers, characters who fascinate, who entice, who enrage. As both reader and writer, I find that characters and their developmental arcs are what keep me engaged.

At least that’s sort of true. Recently I have come to realize it’s not characters in isolation that affect me so deeply, but rather the relationships among characters.

In Thieves’ Quarry, the second book in my Thieftaker Chronicles — coming out from Tor Books today, July 2! — my protagonist, Ethan Kaille, is called upon to investigate the murder of nearly one hundred soldiers and sailors aboard a British naval vessel. Boston is on the verge of being occupied by the army of His Majesty, King George III, and Ethan’s inquiry soon draws the unwanted attention of the Crown’s agents in the city, of Samuel Adams and his fellow revolutionaries, and of several thieves all of whom are trying to track down a cache of stolen pearls.

But as with Thieftaker, the first volume of the series, the narrative of Thieves’ Quarry revolves around Ethan’s interaction with his rival in thieftaking, the beautiful and dangerous Sephira Pryce. Their relationship is fraught with conflicting emotions and impulses: they loathe and fear each other, but Sephira needs Ethan, and Ethan, in turn, is driven by their rivalry to be better at what he does. And underlying every encounter is a subtle sexual tension that both would deny exists.

The challenge of this second book lay in drawing upon the aspects of their interaction that worked in book one, while also keeping their relationship fresh and exciting by introducing new dynamics.

Sephira has several men in her employ; Ethan works alone. She is influential, wealthy, beloved. Ethan is a loner, an ex-convict whom few people trust, much less wish to help. Until now, Ethan’s one advantage over Sephira has been his ability to conjure. So, the first thing I’ve done in Thieves’ Quarry is give Sephira access to magick by adding a conjurer to her retinue of toughs. Ethan’s spellmaking advantage is now gone.

But then I muddy the waters a bit. Without giving away any spoilers, I will say simply that I put Ethan in a situation where, in a way neither of them could have expected, he has little choice but to help Sephira. She insists that this changes nothing between them, but she knows better, and so do we. Don’t get me wrong: they remain rivals, even enemies. They trade threats, they work at cross-purposes at almost every opportunity, Ethan has to fight off Sephira’s men with spells as well as with his blade and fists.

At the same time, though, they take their interaction in directions I had not anticipated when I started the book. I knew that Sephira’s decision to employ a conjurer would upset the equilibrium of their rivalry, and I knew as well that Ethan’s act of kindness would force the two of them to regard each other and all that passes between them in a new light. I didn’t understand, though, how those changes would manifest themselves in the narrative.

Often, when I write a book, I’ll have plot points outlined in a general sense, but the details of dialog and action come into focus organically, as I write. I create in the moment, and so quite often I discover what happens much as my readers do. Writing the scenes with Ethan and Sephira, “watching” as they sparred and cajoled and ultimately reached a new level of understanding, I was both surprised and pleased with the outcome. I had hoped that they would find a way to acknowledge that their relationship had become more complicated, more nuanced, without actually removing from their interactions the sharp edges that make every scene between them so compelling.

I won’t say that I got it right immediately. These scenes took a good deal of work and revision. But in the end, I found that balance I was after. Sephira and Ethan remain rivals; on a fundamental level they are so different and are in such direct competition with each other, that they can never be anything but. After the events chronicled in Thieves’ Quarry, however, they share something more. Call it an understanding, call it a deepening of their mutual respect, even as they continue to circle one another, waiting for their next battle. You’ll have to read the books if you want to know exactly what I’ve done.

I can tell you, though, that their shared story still lies at the heart of the Thieftaker series. Not despite the changes I have put in their relationship, but rather because of them, Sephira is still Catwoman to Ethan’s Batman, Kate to his Petruchio, Nurse Ratched to his McMurphy, all rolled into one. Among all the characters I’ve developed and all the story lines I’ve written, theirs remains the most intriguing relationship I’ve ever created. And that is why, taken together, their scenes in Thieves’ Quarry are My Favorite Bit.

D.B. Jackson is also David B. Coe, the award-winning author of more than a dozen fantasy novels. His first book as D.B. Jackson, the Revolutionary War era urban fantasy, Thieftaker, volume I of the Thieftaker Chronicles, came out in 2012 and is now available in paperback. The second volume, Thieves’ Quarry, comes out today, July 2, just in time for the July 4th holiday. D.B. lives on the Cumberland Plateau with his wife and two teenaged daughters. They’re all smarter and prettier than he is, but they keep him around because he makes a mean vegetarian fajita. When he’s not writing he likes to hike, play guitar, and stalk the perfect image with his camera.

3 thoughts on “My Favorite Bit: D. B. Jackson talks about THIEVES QUARRY”