Cat Rambo is joining us today to talk about her novel Hearts of Tabat. Here’s the publisher’s description:

Fireworks, riots, and rousing speeches all mark the vast societal upheavals taking place in the city of Tabat. But personal upheavals reflect the chaos. Adelina Nettlepurse, noted historian and secret owner of Spinner Press, watches the politics and intrigue with interest, only to find herself drawn into its heart by a dangerous text and a wholly unsuitable love affair with a man well below her station.

The match offered by Merchant Mage Sebastiano Silvercloth would be much more acceptable, but Sebastiano is hampered by his own troubles at the College of Mages, where the dwindling of magical resources threatens Tabat itself. And worse, his father demands he marry as soon as possible.

When Adelina’s best friend, glamorous and charming gladiator Bella Kanto, is convicted of sorcery and exiled, the city of Tabat undergoes increasing turmoil as even the weather changes to reflect the confusion and loss of one of its most beloved heroes.

Meanwhile the Beasts of Tabat — magical creatures such as dryads, minotaurs, and centaurs — are experiencing a revolution of their own, questioning a social order that holds them at its lowest level. But who is helping the Beasts in their subversive uprising?

In the second book of the Tabat Quartet, award-winning author Cat Rambo expands the breathtaking story from Beasts of Tabat with new points of view as Adelina, Sebastiano, and others add their voices. Tabat is a world, a society, and a cast of characters unlike any you have read before. 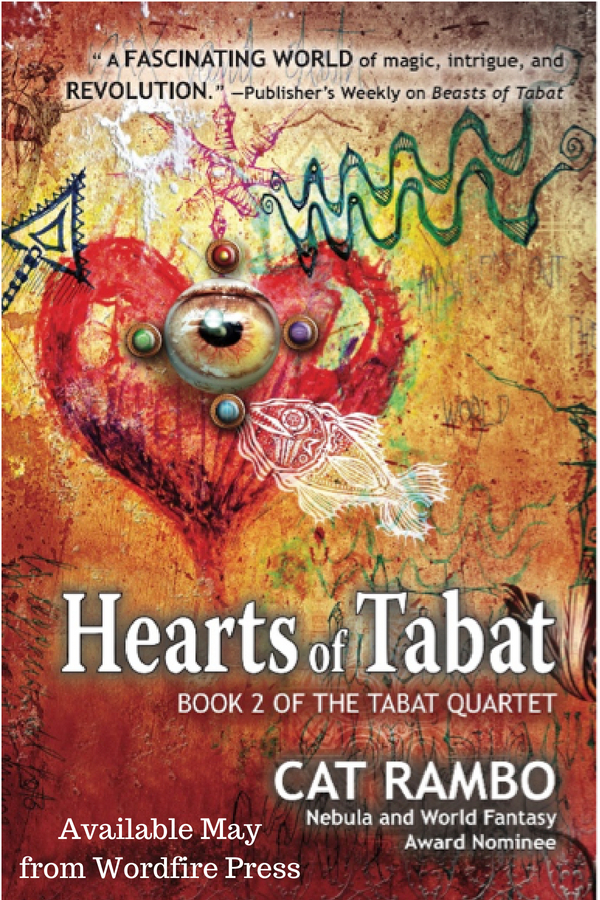 One of my favorite pieces of the most recent fantasy novel, Hearts of Tabat, didn’t actually get into the final version, which was a set of chapter headers defining which Trade God each chapter belonged to. The Trade Gods of the city of Tabat embody various economic forces of one size or another, ranging from the large Anbo and Enba (Supply & Demand) to the more particular, like Zampri, who oversees Advertising, or Uhkephelmi, God of Small Mistakes.

I ended up removing these headers because I was afraid readers might take them to be more meaningful than they are, but they were great fun to figure out and many still made their way into the book itself or other Tabat works, such as the novelette I just finished, “God of the Balanced Ledger,” which talks at great lengths about some of the practices of merchants of Tabat.

I love complicated mythologies, and I’ve tried to create one in the Trade Gods, though I’ve also tried to make their names make sense by making a list of the more important morphemes as well as creating suffixes that identify gender: female, male, neuter, multi, and other. I know that if a god’s name starts out with “Dom,” for instance, they have something to do with communication, such as Dompkepko, God of Negotiation, or their sibling Domkepthka, God of Persuasion. “Aril” on the other hand usually signals some sort of tie or alliance.

In creating the mythology, I’ve tried to show how the merchants living within it see the world, as something that is made up of economic forces, with a sense of a mythology that is as much a textbook of basic economic theory as it is a scripture, but still captures the flavor of a lively, energetic pantheon. Some of them got quite complicated, such as Rilriliworhaomu, Trade God of Hypothetical Marital Alliances.

The sequel, Exiles of Tabat, is dedicated to another specific trade god, Uhcoemo, Trade God of Exiles. Where this book has explored some of the events of the first from different points of view, the third returns to Bella Kanto and Teo, this time far away from Tabat, struggling with the immense changes that have happened in their lives.

Some folks have said nice things about the worldbuilding in both Hearts of Tabat as well as its predecessor, Beasts, and I think it’s pieces like this, which provide both underlying structure and new directions for stories to go in, that help create an immersive, interesting world, along with all the fantastic talking gryphons, magic fountains, and other details of the seaport of Tabat. By now I’ve written not just two and a half novels in its world, but over two dozen stories, and I know I’ll keep coming back and finding new details, perhaps overseen in that endeavour by Marbu, Trade God of Chance and Domkepdepru, Trade God of Books.

Here’s some of those other Gods for your amusement:

Diahmo, God of the Balanced Ledger

Vioyaovi, the God of Filial Display

Cat Rambo lives, writes, and teaches atop a hill in the Pacific Northwest. Her 200+ fiction publications include stories in Asimov’s, Clarkesworld Magazine, and The Magazine of Fantasy and Science Fiction. She is an Endeavour, Nebula, and World Fantasy Award nominee. Her 2018 works include Hearts of Tabat (novel, WordFire Press) and the updated 3rd edition of Creating an Online Presence for Writers. For more about her, as well as links to her fiction and her popular online school, The Rambo Academy for Wayward Writers, see http://www.kittywumpus.net. She is the current President of the Science Fiction & Fantasy Writers of America. (SFWA.org)