Cat Rambo is joining us today with her novel Beasts of Tabat. Here’s the publisher’s description.

When countryboy Teo arrives in the coastal city of Tabat, he finds it a hostile place, particularly to a boy hiding an enormous secret. It’s also a city in turmoil, thanks to an ancient accord to change governments and the rising demands of Beasts, the Unicorns, Dryads, Minotaurs and other magical creature on whose labor and bodies Tabat depends. And worst of all, it’s a city dedicated to killing Shifters, the race whose blood Teo bears.

When his fate becomes woven with that of Tabat’s most famous gladiator, Bella Kanto, his existence becomes even more imperiled. Kanto’s magical battle determines the weather each year, and the wealthy merchants are tired of the long winters she’s brought. Can Teo and Bella save each other from the plots that are closing in on them from all sides? 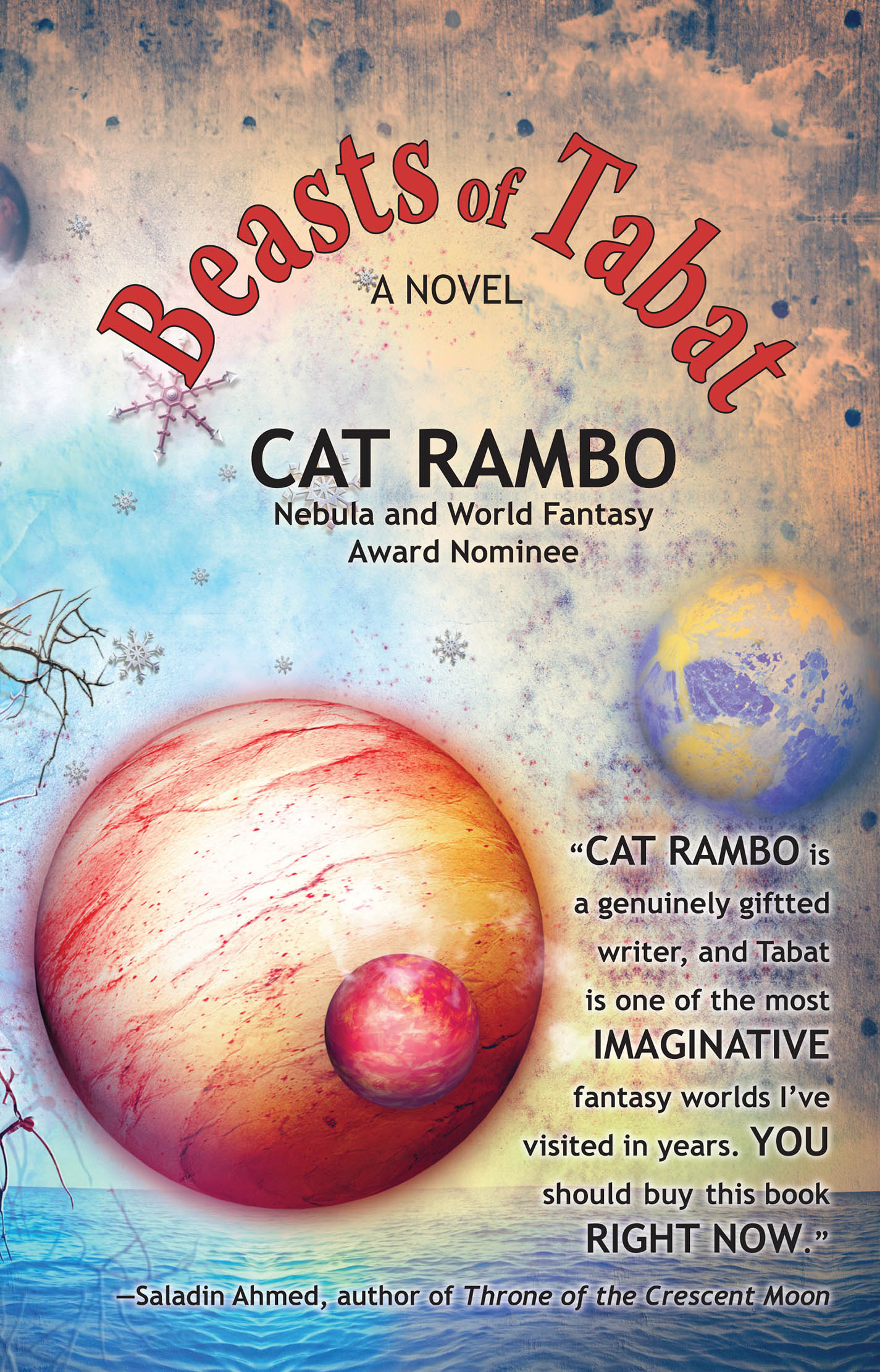 I’m still a little dazed that Beasts of Tabat is appearing in print; it’s been a long time in the works, and now it’s going from acceptance to print copy in under three months. I’m halfway through finishing book two, Hearts of Tabat, and finding that knowing that the books will be in people’s hands makes an enormous difference in terms of motivation and speed. I’m revelling in Hearts when I get a chance to dive in and write, and I’m so happy with the book at the moment.

What’s my favorite bit about Beasts of Tabat, though? It’s related to that second book, in that I love the structure that’s emerged. Book one follows two characters: Teo, a boy who has just come to Tabat, and Bella Kanto, the foremost Gladiator of the city, who is about to face the biggest challenge of her life. Teo has come to the city with a secret that can kill him. When he’s taken under the wing of Bella, a heroic figure he’s worshipped for most of his brief life, he thinks all his problems solved, but they’ve only just begun.

They’re both in Tabat, a city in which I’ve placed numerous stories, including “I’ll Gnaw Your Bones, the Manticore Said” from Clarkesworld Magazine, “The Dead Girl’s Wedding March” (though technically that takes place under the city) from Fantasy Magazine, and “The Ghost-Eater” (in XIII from Resurrection Press). It’s a world where the human economy depends on both the labor and sometimes even physical bodies of what they call “Beasts,” intelligent magical creatures such as centaurs, dryads, manticores, and minotaurs. At this point in time, those creatures are questioning the system, and political upheaval fills the city.

Book two starts at a chronological point halfway through Beasts, and follows three different characters: Bella’s best friend and former lover, Adelina, and the two men who are wooing her, one a mage and the other a riverboat pilot. Book three (Exiles of Tabat) will pick up with Bella and Teo again, jumping back in time to point where the first book ends, and then it’ll be a glorious medley of povs in the final book, Gods of Tabat.

That’s a structure that grew out of an earlier version with an unmanageable number of points of view, and it’s made me think a lot about the series’ overall arc and how to create that out of the stories I have at hands.

It’s also a weird and experimental structure that I’m not convinced a traditional genre publisher would have let me get away with, and that’s among the many reasons I’m excited to be working with Kevin J. Anderson and Rebecca Moesta’s excellent Wordfire Press. And it lets me play around with point of view in a way that I really enjoy. Workshopping an early draft of the book, Walter Jon Williams said, “Suddenly I realized I was in the point of view of a pigeon, and not just that, a hypothetical pigeon,” and though that early pigeon went away in later drafts, I think it’ll be back before the last page of Exiles of Tabat.

I go about in a happy glow that I’ve finally got a chance to put Beasts and its accompanying books in front of the world. While I’m starting to approach two hundred short stories published, I’ve always been a bit self-conscious about the fact that though I’ve written several novels, I didn’t have any actually published ones. Now I can put that little insecurity aside, and find some new thing to obsess over.

Amazon  (hardcopy and other e-formats are coming)

World Fantasy and Nebula-nominated writer/editor Cat Rambo lives, writes, and teaches by the shores of an eagle-haunted lake in the Pacific Northwest. Her fiction publications include stories in Asimov’s, Clarkesworld Magazine, and Tor.com as well as three collections and her latest work, the novel Beasts of Tabat. A fourth collection, Neither Here Nor There, appears this fall from Hydra House. She is the current Vice President of the Science Fiction and Fantasy Writers of America.

1 thought on “My Favorite Bit: Cat Rambo talks about BEASTS OF TABAT”