Betsy Dornbusch is joining us today with her novel, Emissary: The Second Book of the Seven Eyes. Here is the publisher’s description:

Draken vae Khellian, bastard cousin of the Monoean King, had risen far from his ignominious origins, becoming both a Bowrank Commander and a member of the Crown’s Black Guard. But when cursed black magic took his wife and his honor away, he fought past his own despair and grief, and carved out a new life in Akrasia. His bloody, unlikely path, chronicled in Exile: The First Book of the Seven Eyes, led him to a new love, and a throne.

Draken has seen too much blood . . . the blood of friends and of enemies alike. Peace is what he wants. Now he must leave his wife and newborn child in an attempt to forge an uneasy peace between the Monoean King and the kingdom of Akrasia. The long bloody shadow of Akrasia’s violent past hangs over his efforts like a shroud. But there are other forces at work. Peace is not something everybody wants . . . not even in the seemingly straightforward kingdom of Draken’s birth.

Factions both known and unknown to Draken vie to undermine his efforts and throw the kingdom into civil war. Forces from his days in the Black Guard prove to be the most enigmatic, and a bloody tide threatens to engulf Draken’s every step.

What is Betsy’s favorite bit? 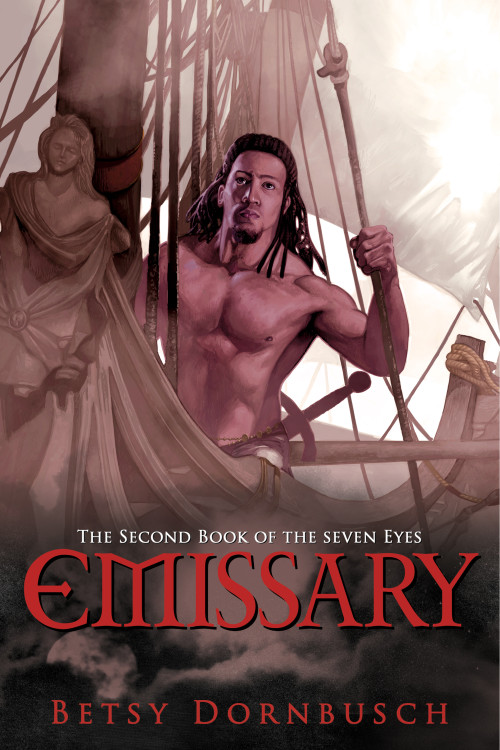 First, thanks to Mary for hosting me today! I love the theme because we all have those favorite parts of our own books that we love so much, but it feels funny sometimes to mention them—kind of like telling a stranger the thing you love most about your spouse or your kid or your dog. But books are different yet. I think as writers it’s essential to know not only what appeals to us about our own writing, but why. Too few times, though, do we get to point out to ourselves, “Here, right here, I did good.”

In reading this series of posts, I was unsurprised to see many favorite bits consist of relationships between characters. Like with any job, like with anything at all, it’s really the people who make or break it. Relationships with good chemistry can make magic of the most mundane situation.

For Draken, living in secret exile in enemy lands, all his relationships are taut with tension and rife with lies. Every word is a landmine waiting to blow, because he knows too much of what he shouldn’t, and too little of what he should.

Few people know his past, almost none know he was banished or why… but for one: Aarinnaie, a princess trained as an assassin by a necromancer, a damaged, desperate young woman torn between powerful people. She threatens Draken at their first meeting in Exile, where he’s interrogating her about an attempted murder.

Draken rested his forearms on his knees again, the towel and water forgot­ten, resentment deepening his voice to a growl. “And look at you: chained like an animal in the Queen’s Bastion, a hundred Royal Escorts vying to be the one who pulls the blade through your throat.”

Draken had no real reason to feel loyalty to anyone; he had done all he had up to now in the name of survival and a misguided—he knew that now—attempt at solving his wife’s murder. But he felt something. Elena’s very real fear tugged at him, and now this young woman sat before him in dire straits. It all was so confusing and pathetic. How had he been dragged into this mess?

Gods, by my own doing, he thought. He rubbed his hand across his face, willing away an anger that had nothing to do with her. “Give me a reason to save your life, Aarinnaie. Show me your value to the Queen, and I’ll do my best to protect you.”

“Oh, you will want to protect me. For if I ever feel a noose about my throat or cold steel at my nape, Draken vae Khellian, Bowrank Commander and Black Guard for your cousin the Monoean King, I’ll shout your name loud enough for the Gods, and certainly Reavan, to hear.” Aarinnaie unfurled a small, certain smile, her utter accuracy grinding a cold and feral knife deep into his soul.

Their relationship only deteriorates from there. Throughout Exile Aarinnaie is an enemy leading Draken on a merry chase to a destination that threatens to kill not only him, but everyone in his newfound country. But by early in Emissary, the two have become close confidants. Aarinnaie still has her wild side, a penchant for blood, and a mouth on her. She disappears for weeks without a word; she might or might not be out killing for pleasure or coin, or doing any number of other unsavory things. But she is loyal to Draken.

For his part, he never goes back on his word to her. He promised to protect her and does his damnedest. Though sometimes it’s debatable who is protecting whom…

Shouts penetrated the rain, his agony, and his groggy mind. Metal clanged. A deep voice screamed. Rain and briny spray ran into Draken’s nose and open mouth, making him cough.

A sharp, high voice, unrecognizable through his coughing: “Ty! Get him up, damn you!”

Rough hands hauled Draken back up over the rail and dumped him onto the hard wood deck, slick with rain and a familiar, sickly-sweet reek that clotted in his lungs with every gasping breath. Rain pelted down clear and splashed back up crimson. Narrow, delicate bare feet stopped near his face.

Draken blinked and strained to see, but just got an eyeful of rainwater for his trouble. He squeezed his eyes shut against the sting. “Aarin—” Another burst of coughing cut him off.

“Up, Draken. You’ve a ship to command.” Strong, slim hands tugged at his bare arm, digging into his muscles. Her fingers felt like dagger points.

He moaned again and shoved to a sit, unable to pull free of her iron grip. Khellian’s balls, she was strong for such a slight thing. “Aarinnaie. You’re pulling on me.”

Scenes between these two almost write themselves, their chemistry is so strong. But that’s not the main reason why I love Aarinnaie and her relationship with Draken. First of all, let me be clear. She is not a love interest. Nor does she actually need his protection; she’s a danger in her own right. She certainly saves him from more than one scrape. But despite all that, she does choose to sometimes let him help her. And in doing so, they both learn vulnerability doesn’t equal weakness, and that two broken people can come pretty close to fixing themselves if they do it together.

Betsy Dornbusch is the author of a dozen short stories, three novellas, and three novels. She also is an editor with the speculative fiction magazine Electric Spec and the longtime proprietress of Sex Scenes at Starbucks.

1 thought on “My Favorite Bit: Betsy Dornbusch talks about Emissary”