Ashok K. Banker is joining us today with his novel Upon a Burning Throne. Here’s the publisher’s description:

From international sensation Ashok K. Banker, pioneer of the fantasy genre in India, comes the first book in a ground-breaking, epic fantasy series inspired by the ancient Indian classic, The Mahabharata

In a world where demigods and demons walk among mortals, the Emperor of the vast Burnt Empire has died, leaving a turbulent realm without an emperor. Two young princes, Adri and Shvate, are in line to rule, but birthright does not guarantee inheritance: For any successor must sit upon the legendary Burning Throne and pass The Test of Fire. Imbued with dark sorceries, the throne is a crucible—one that incinerates the unworthy.

Adri and Shvate pass The Test and are declared heirs to the empire… but there is another with a claim to power, another who also survives: a girl from an outlying kingdom. When this girl, whose father is the powerful demonlord Jarsun, is denied her claim by the interim leaders, Jarsun declares war, vowing to tear the Burnt Empire apart—leaving the young princes Adri and Shvate to rule a shattered realm embroiled in rebellion and chaos….

Welcome to the Burnt Empire Saga.

What is Ashok’s favorite bit? 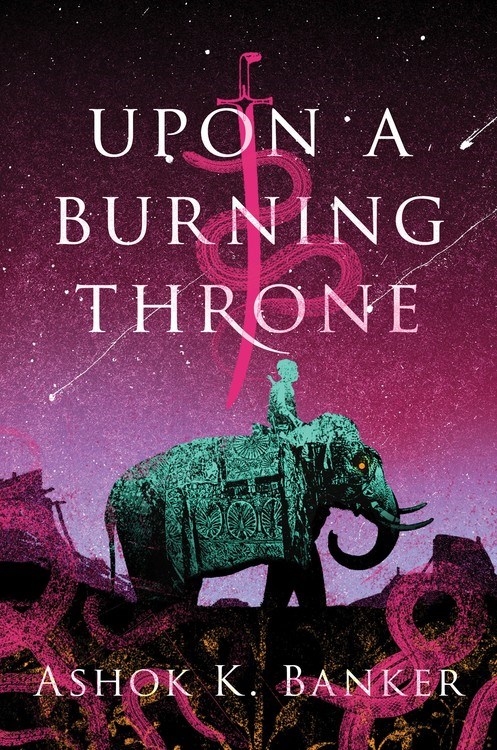 Upon a Burning Throne is a fairly short book. Almost a novella. Barely a morsel. Only 246,000 words. Why, I’d call it a short story. Or a flash. A fragment, really.

It’s only the first of a nine book series called The Burnt Empire Saga. And the later books in the series are considerably longer than the first. So much longer that, depending on the publishers, paper costs and binding technology at the time they’re published, they might even be split into two parts apiece. Which is what the Indian publishers of Upon a Burning Throne have done for their edition.

Honestly, I think the length is nothing at all, especially if you love exciting, immersive epic fantasies.

It’s such a teensy weensy thing, a pupper of a story, a wee kitten.

In fact, my favorite bit in the book is what I left out.

Not out-takes, or the short stories, novelettes, and novellas I excised from the original draft and which have been published on Lightspeed Magazine as Legends of the Burnt Empire.

Those are more on the order of important backstory as well as origin stories of key characters and relationships that impact the main plot of Upon a Burning Throne. In a sense, they are part of the Burnt Empire Saga as a whole.

I don’t mean those parts.

I mean the parts that literally don’t exist anywhere in print or pixels. They only have a life in my mind.

I’m talking about the things I’ve left unsaid in the book.

Like the two key chapters at the very end of the book where two minor characters suddenly do or say things that are wholly unexpected. In one case, it’s even arguably out of character – though that particular person has shown himself capable of being uncharacteristically earlier in the book as well, so even that’s arguable. (They’re both male-appearing characters so I’m not giving away any spoilers here.)

Those two chapters and characters and what they do in one case, and say in the other instance, change everything that is to follow, turning the whole book on its head, so to speak, or pulling the rug out from under everyone’s foot – the other characters’ feet, and, if I’ve done my job right, the readers as well.

But it’s what I don’t say in those chapters that is the part that makes it work. The part that will (again, if I’ve done my part correctly) make the reader go “WTF? OMG!”

Similarly, in the beginning of the book, the main opening sequence, the long set-piece broken into several smaller chapterlets, the main “hero” or chief protagonist of the entire series and story is introduced, but this person is only just a baby at that point.

And I mean that literally, by the way. A baby as in a diaper-wearing milk-suckling babe, although of course they didn’t have diapers in the Burnt Empire or anywhere else in the world of Arthaloka, which is probably why said character is wrapped in a blankie. (There are always blankies in every world, just as there are always babies; any high fantasy world without babies and blankies is not a world worth contemplating leave alone writing about and I refuse to entertain the very idea of such a blankie-less, babe-less wasteland. Pshaw!)

That baby in a blankie will turn out to be the main protagonist of the Burnt Empire Series, or hero, if you will.

But I never say so openly in Upon a Burning Throne. I’m only saying it here, on Ms Kowal’s lovely online soap box, because it’s my favorite bit in the whole book.

I introduced the hero of the entire series as a baby in a blankie in a single brief scene in Book 1, and then never said a word more about that person in the rest of the 246,000-word book!

Again, this isn’t a spoiler. Anyone reading about Upon a Burning Throne will soon learn that the sequel A Dark Queen Rises follows lickety split on its heels. Just a year later. And as that second book’s title so blatantly and shamelessly reveals (major spoiler now) that protagonist is, of course, the eponymous dark queen.

The same one whom you were introduced to briefly but memorably as a baby in a blankie in Book 1. Yes, the very one. Gadzooks.

And I never told you that when she first came on the scene. Or at any point thereafter. In fact, I never even hinted throughout that entire 688-page hardcover volume (beautifully designed, bound, with a delicious cover and a simply sumptuous map, by the way) that she was even going to be the protagonist!

Like I said before, I left that bit out.

I wrote an entire BFF (Big Fat Fantasy, not to be confused with Best Female Friend, though those are awesome too) without letting on that the main protagonist doesn’t even take center stage until book 2!

Because all heads turn when the hunt goes by. And the Queen, especially the Dark Queen, never leads the hunt.

She arrives in style, heralded and ushered, the path well beaten and cleared, the crowds assembled, the trumpets echoing across the vale.

Ashok K. Banker is the pioneer of the speculative fiction genre in India and the author of 60+ books, including the internationally acclaimed Ramayana series. His works have all been best-sellers in India, and have sold around the world.