Anne Lyle also writes historical fantasy, which is one of my happy places for fiction. Her first book was set in Elizabethan England, but the new one takes us to Venice.
What’s her Favorite Bit?
ANNE LYLE
When I started planning the sequel to my Elizabethan fantasy novel “The Alchemist of Souls” way back in 2007, I knew I wanted to set it in Venice, which I had visited a few years earlier. Not only is it a beautiful and fascinating city, but it has also changed very little in the past few hundred years, making it a great setting for a historical novel. I ended up throwing out that first draft and rewriting the book (now titled “The Merchant of Dreams”) from scratch, but the setting and some of the key characters remained, 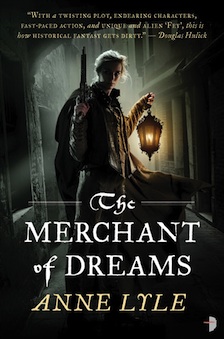 and I knew I wanted to go back there to research it properly.
First, though, I did some online research for my book, and whilst looking into the different kinds of boats used in Venice (they didn’t just have gondolas, you know!) I came across a website belonging to an ex-pat Brit who owns a renovated medieval palazzo in Venice and rents out rooms on occasion. I contacted him, and arranged to stay for a few nights with my husband. It was the perfect place for a writer’s research trip: tucked away in one of the less touristy areas, right on the canal-side with a little garden – and free wifi 🙂
Although it has been renovated, the palazzo still has some Renaissance features, like the huge stone pillars in the living room (formerly a storeroom/gondola dock, since regular flooding makes it inadvisable to live on the ground [first] floor of Venetian houses) or the ornate marble hood of the fireplace in the dining room. Note that when I say “palazzo”, this is what all Venetian houses tended to be called, to distinguish them from the multi-occupancy tenements where the lower classes lived. The other word for such a place is “ca'”, the Venetian dialect form of Italian “casa”. Most houses have names (e.g. Ca’ Dario, which appears later in the book), but I felt I couldn’t use the real name of this one (Ca’ Malcanton) because it bears an uncanny similarity to that of my protagonist, Mal Catlyn. (Cue “Twilight Zone” theme…)
Of course I had to put it into my book, so I made it the home of the English ambassador and thus my spy characters’ base of operations in the city. Queen Elizabeth I didn’t actually send an ambassador to Venice, but since I’m writing alternate history this gives me a bit of licence. Still, I made him relatively unimportant and unregarded – at this stage in history, England was not established as a world power – and hence this tiny palazzo in the suburbs fits his position nicely.
I had to make a fair bit up, since we weren’t allowed all over the house, but many of the details are entirely accurate. The uppermost floor consists of two main attic rooms, as described in the novel, and there really is a pomegranate tree in the garden. In my book it’s summer and the tree is in flower, but when we were there in October it was fruiting and we had the seeds in our breakfast fruit salad.
Finding these little nuggets of reality – the details of real peoples’ lives – amongst the dust of the past is one of the main reasons I love writing historical fantasy. Right now I’m working on the final instalment of the trilogy, set mainly here in England, which is giving me an excuse to visit all my favourite Tudor places, from the Tower of London to Hampton Court Palace. In fact I visit them so often, I bought the annual membership card!
RELEVANT LINKS:

The Merchant of Dreams (Night’s Masque)

Anne Lyle was born in what is popularly known as “Robin Hood Country”, and grew up fascinated by English history, folklore, and swashbuckling heroes. Unfortunately there was little demand in 1970s Nottinghamshire for diminutive swordswomen, so she studied sensible subjects like science and languages instead.

It appears, however, that although you can take the girl out of Sherwood Forest, you can’t take Sherwood Forest out of the girl. She now spends practically every spare hour writing – or at least planning – fantasy fiction about dashing swordsmen and scheming spies, set in imaginary pasts or invented worlds. Her Elizabethan fantasy series debuted earlier this year with “The Alchemist of Souls”, and the sequel “The Merchant of Dreams” is published on December 18th. She is currently working on the final volume in the trilogy, “The Prince of Lies”, due out November 2013.

3 thoughts on “My Favorite Bit: Anne Lyle talks about THE MERCHANT OF DREAMS”