Anna Kashina is joining us today to talk about her novel Shadowblade. Here’s the publisher’s description:

A young sword prodigy must impersonate a lost princess and throw her life into a deadly political game, in this kinetic epic fantasy novel by the author of the award-winning Majat Code series

Naia dreams of becoming a Jaihar Blademaster, but after assaulting a teacher, her future seems ruined. The timely intervention of a powerful stranger suddenly elevates her into elite Upper Grounds training. She has no idea that the stranger is Dal Gassan, head of the Daljeer Circle. Seventeen years ago he witnessed the massacre of Challimar’s court and rescued its sole survivor, a baby girl. Gassan plans to thrust a blade into the machinations of imperial succession: Naia. Disguised as the legendary Princess Xarimet of Challimar, Naia must challenge the imperial family, and win. Naia is no princess, but with her desert-kissed eyes and sword skills she might be close enough… 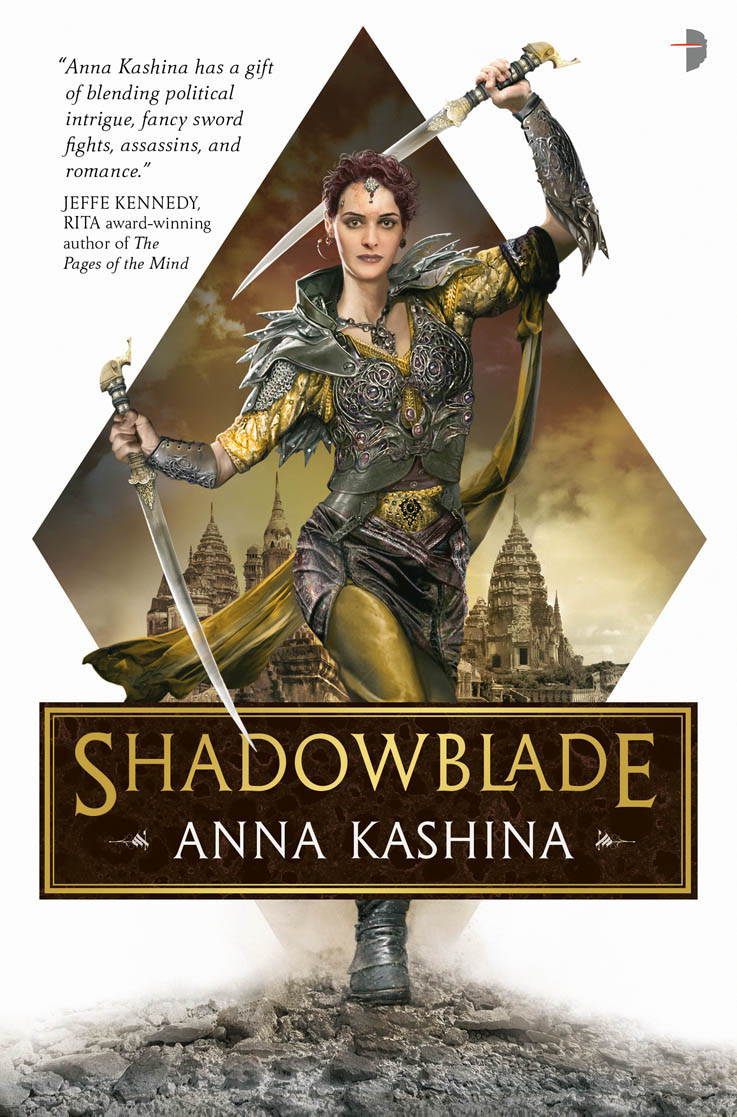 My favorite fantasy always comes with romantic elements and fancy blade fights. Highly competent warriors, whose sword skill is so breathtaking one can only gape when seeing them in action, make irresistible characters. Such warriors have been central to several of my recent books, and have definitely been my favorite bit in writing Shadowblade.

In Shadowblade, a lot of the story centers around the elite Jaihar Order that trains the best blademasters in the empire. The top-ranked Jaihar warriors are Shadowblades, deadly fighters whose ranking regalia – shadow-gray cloaks and black blades — help them blend into the background and make them even more dangerous. Unmatched in battle, they move like no other, graceful, fluid and fast, are highly technical with their weapons, and are also very controlled. In other words, they’re the whole package, aren’t they?

Before Shadowblade, I’ve tended to focus on the weapon skill itself, rather than delving deeply into the kind of training it takes to develop this kind of a warrior. What sort of talents and traits are needed to achieve the top Jaihar rank, or even to convince your superiors to set you on a path that can lead you to this possibility? What happens at every step of the training? How are the decisions driven to discount a trainee as a failure, or to allow them to go all the way to the top? And, importantly for my main character, Naia – how can a young girl, hard-working and talented, but too headstrong for her own good, go about achieving it?

Naia starts off as an outcast among the Jaihar. Despite her exceptional promise with weapons, she is about to be expelled for a carefully hushed-up case of insubordination. A timely interference of a powerful stranger, an outsider to the Jaihar but a highly influential official in the empire, plunges her into a series of tests of increasing difficulty that would enable her superiors to decide on her true potential. She doesn’t learn until much later that her mysterious benefactor, who’s very likely prevented her from being expelled, has done this because of a serious ulterior motive.

Developing a story centered around Naia’s training has been a fully immersive experience, where I had to submerge pretty deeply into the behind-the-scene world of elite blademaster training. It was so much fun to work out the blade and staff techniques, approaches to a variety of street weapons, and complex combination fights which I had to work through firsthand. A lot of this background work has been about technique, but applying this knowledge to my character enabled me to also understand the depth of the character development that must go into raising a warrior. The self-control, discipline, and balance that comes with the top Jaihar ranking isn’t easy to achieve. This aspect of the training tends to take far more work than weapon technique. Throughout the book, peeking into the mysteries of the Jaihar elite training has been my favorite bit.

Since Shadowblade pre-publication copies went out for reviews, I’ve seen a lot of comments out there that made me feel so good about choosing to write the book this way. One reviewer (clearly a kindred spirit) mentioned that they would have liked to have seen more of this behind-the-scene training, that glimpsing the challenges Naia has gone through made them want to see a whole book devoted entirely to that. This comment hit the spot for me. Writing about Naia’s Jaihar training, and then sending her into action to apply everything she’s learned, not only felt like the right balance for Shadowblade, but it also made me realize that I have so much more to tell. I’ve learned a lot while writing this novel. Stemming from my own experience and all the background research, the Jaihar have become a new class of warriors that combine the best of many cultures and many techniques into a truly enjoyable and wholesome blend.

Anna Kashina writes historical adventure fantasy, featuring exotic settings, martial arts, assassins, and elements of romance. Her “Majat Code” series, published by Angry Robot Books, UK, received two Prism Awards in 2015. She is a Russian by origin, and a scientist in her day job, and she freely draws on these backgrounds in her writing. Her newest novel, Shadowblade, is upcoming from Angry Robot Books on May 7, 2019.

You can learn more about Anna at her blog: https://annakashinablog.wordpress.com/