I’m very excited about the newest installment in the Books of Chantments universe. I so enjoy the way magic is handled as something that is both powerful and can embue ordinary objects with extraordinary properties. So what is the author’s Favorite Bit? Let’s see.

I had to think a fair amount about this idea of a favorite bit for my novel BLUE MAGIC. It’s not that I don’t love just about a million things in my Books of Chantments universe. If anything, I was spoiled for choice. But many of the things that sprang to mind first seemed far too spoilery to squee about. 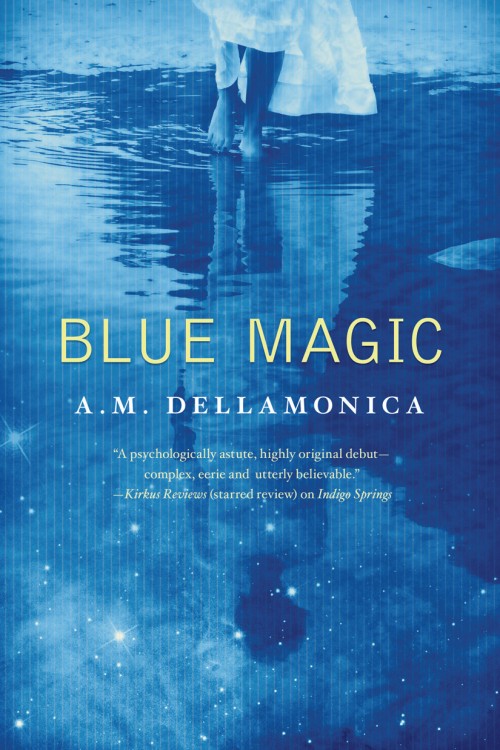 On second look, though, I decided many of those story elements were tied into the character of Juanita Corazon. I’ve realized that one of the neat things about writing the sequel to INDIGO SPRINGS (my first sequel, which sounds like a contradiction in terms) was getting to bring in someone who was new to the whole magical mess that I created in the first book. Don’t get me wrong–I love writing about Astrid Lethewood and Ev and Will and even Sahara Knax . . . but when I embarked on the beginning of BLUE MAGIC, I had a pretty good sense of where they had to end up. (At least, that’s how I remember it.)

With Juanita I got to carve out a little unexplored terrain. New person, new point of view character. Newness is alluring; it’s got a shine to it that the familiar just doesn’t.

So what do I love about this character? One of the most important things Juanita brings to this messed up mystical apocalypse is super-competence.

I know I’m not the only person who finds the ability to just do a job well and completely very sexy. And it may be that there’s a dearth of that in these books. It’s not that everyone besides Juanita is dumb, but a lot of them are inventing wheels–magic has just burst back into the world, and the people working with it are figuring everything out from the basics. It’s all trial and error. Will Forest, meanwhile, is great at what he does, normally (he’s a criminal psychologist and hostage negotiator) but his children are missing and so he’s operating at far below his normal wattage.

Juanita’s a Federal Marshall doing a great job of something that’s, maybe, a bit easy for her. She was contemplating getting into something else before the magical outbreak upheaved everything, and so she gets this comparatively plum posting at Sahara Knax’s trial for treason.

As the book progresses, she gets more and more dumped on her, and nobody really sees it. As far as all these wizards and witch-burners are concerned, she’s a means to an end. There’s a four-way struggle to control enchantment–the U.S. military is duking it out with two brands of religious zealot and Astrid Lethewood’s volunteers–and every single faction is coming to Juanita. Some of them are polite enough to ask; then there are the ones saying ‘do this or we’ll kill your family.’ But they’re underestimating her: they all see her as a minimally educated cop in a dead end job. They don’t realize they’re each giving her information about their faction and she’s using it to build her own picture of what’s going on. It’s not that she knows everything as the magical struggle unfolds, but she becomes the only person who’s got pieces of everyone’s puzzle.

Somehow she has to sort through all that information and prophecy and propaganda about the various agendas of all the factions and confront the super-powerful individuals running them. She has to do it without getting arrested, enchanted or killed and still manage to make the right choice.

I think she really rises to the occasion.

A.M. Dellamonica‘s new novel, Blue Magic, is the sequel to her 2009 Sunburst Award winning novel Indigo Springs. A resident of Vancouver, British Columbia, she is the author of over thirty short stories and teaches writing through the UCLA Writers’ Extension Program.

1 thought on “My Favorite Bit: A. M. Dellamonica talks about Blue Magic”