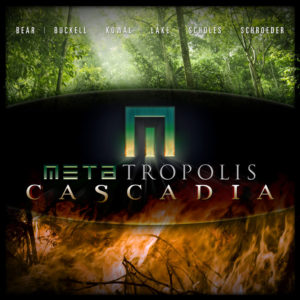 Look at this shiny thing!

The METAtropolis: Cascasdia anthology will come out in audio on November 16.

As the mid-20th Century approaches, the Pacific Northwest has been transformed — politically, economically, and ecologically — into the new reality of Cascadia. Conspiracies and secrets threaten the tenuous threads of society. The End of Days seems nearer than ever. And the legend of the mysterious Tygre Tygre looms large.

Here’s a teaser of my story, “Water to Wine.”

Water sprayed out from beneath the wine barrel, carrying the faint stink of sulfur with it. I suppose it’s crazy to have a fondness for the smell of rotten eggs, but that means cleanliness in the wine industry. I shut off the hose and wrestled the barrel off the ancient Gamma-Jet, rolling it to the racks outside the cellar door so it could drain in the sun.

I tend to grunt whenever I heave a barrel off the ground and let it drop onto the metal frame. It’s not the weight so much — an empty barrel weighed about a hundred pounds — but the size is awkward. I’ve seen men who can’t do this, and so I take a certain delight in being able to heft them. My hands are constantly getting nicked from where the metal hoops at the ends catch me, and the scarring would ruin any chance at a career as a hand model– as if I would leave the winery voluntarily. Still there are days when a physically easier job would be welcome.

At the far end of the cellar, my dad tromped into view. I straightened, putting a hand against my lower back as it cracked in protest. I hadn’t expected him back from Portland for another couple of days, so the trip either went really well or really badly.