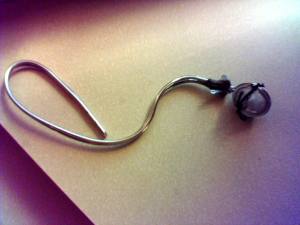 I should catch you up on what’s happening with the colon puppet.

After I gave up on finding the part that the bandsaw flung across the room, I got a new tea-strainer spoon to dismantle. While I’d normally mill my own parts, this was already the perfect shape, so hey, why make work for myself?

I used a doubled length of aluminum armature wire to provide the internal shape of the colon. This is a decision that may come back to bite me. I wanted the wire to be flexible enough that I could get it through the opening in the jar but stiff enough that it won’t reshape randomly on its own. In theory, this will work, but I might have to stiffen it further after the colon is in the jar. 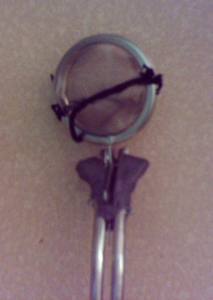 Here you can see the “mech” itself.

I’ve mounted it to the aluminum with plumber’s putty. It’s great stuff that is basically a two part epoxy. It gets almost metal hard and is good for adding stability to structures.

The dark band going around the ball is a band of elastic cord. At the moment this is stitched in place, but once I get the whole thing assembled, I’ll likely pull it out. I’m hoping that the spandex skin of the colon will act as the return and I won’t have to have an extra one internally.

This is probably a vain hope, but you know, a girl can’t help but to be optimistic.

The reason I don’t want the extra return is because it will cause more resistance, which leads to fatigue while doing lipsync. I only want the puppeteer, Jay, to exert the minimal effort to move the mouth.
.
.