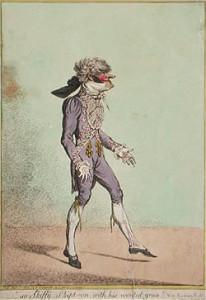 When I was researching the Prince Regent’s set, I ran across Sir Lumley St. George Skeffington who went by the nickname “Skiffy.”

How could I not use him?

Skiffy was a baronet and a playwright who had some success with his play “The Sleeping Beauty” but was cheifly known for being a dandy.

The Letter Bag of Lady Elizabeth Stanhope includes this account of him.

`He,’ Gronow mentions, ‘used to paint his face like a French toy. He dressed d la Robespierre and practised other follies, although the consummate old fop was a man of literary attainments, remarkable for his politeness and courtly manners, in fact, he was invited everywhere. You always knew of his approach by an avant courier (sic) of sweet smells, and as he advanced a little nearer, you might suppose yourself in the atmosphere of a barber’s shop.'” 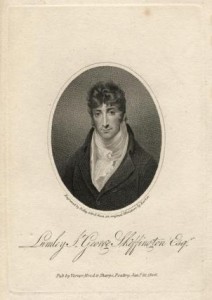 I had a good deal of fun including Skiffy.

Here is an engraving of what he is supposed to have looked like. Of the real Sir Lumley, we have an account by John Stanhope:

Poor Skeffington was the Dandy of the day, par excellence. Remarkable for his ugliness, his dress was so exaggerated as to render his lack of beauty the more marked. He was a very goodnatured man, and had nothing of the impertinence of manner of the fops who succeeded him. Moreover, he was a bel-esprit, writing epilogues and prologues, and was at one time the observed of all observers. I have seen him at an assembly literally surrounded by a group of admiring ladies. 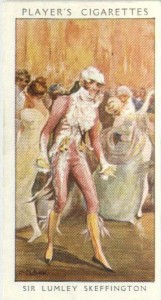 And how does he fare in Glamour in Glass

“Oh! Horrid. Horrid, I tell you. I have never seen a man with less understanding of the nature of cloth than he displays. Why, did you know that I went in on the recommendation of a friend, whose advice I shall not favour henceforth, and M. Lecomte had the temerity to suggest superfine cloth? To me?” He took out a perfumed handkerchief and patted his forehead. “I turned on my heel and left without another sign. It was clear he was not current.”