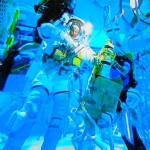 You might have missed this post on Tor.com about my research trip to NASA. Come check it out (there is much squeeing)!

It’s like this… An astronaut asks if you want to spend the day at work with him. You say, “Yes.”

More specifically, it was like this. Kjell Lindgren, a NASA astronaut who spent 142 days in space, was a consultant when I was writing The Calculating Stars and The Fated Sky. So by “Would you like to spend the day with me at work?” what he meant was “Do you want to come to the NBL and watch a full dev run?”

Let me explain. He invited me to go to the Neutral Buoyancy Laboratory, which is a swimming pool the size of a football field and three stories deep, containing a full-scale replica of the International Space Station. A “dev run” is a developmental run of a spacewalk—basically, they simulate a spacewalk in 6.2 million gallons of water.

He acknowledged that I had a point.