Stephanie A. Cain is joining us today with her novel Shades of Circle City. Here’s the publisher’s description:

Chloe is Catholic, a cop, and conventional, not necessarily in that order. But when a run-of-the-mill burglary arrest goes bad, she ends up dead. Turns out there are worse things than having a bra that doesn’t fit right.

When she wakes up alive–yeah, she’s as surprised as you are–she keeps seeing people her friends can’t see. She can’t get those people to talk to her, though, and one of them looks hauntingly familiar, even though it’s no one Chloe actually knows.

A handsome Indiana State Trooper with secrets of his own tells her that her would-be killer is tied to an open robbery case. While they work together to bring a relentless killer to justice, Chloe has increasingly disturbing encounters with the shades only she can see.

She finally realizes her death (and subsequent resurrection) has given her a connection to the restless dead of Indianapolis, and with a recent homicide rate over a hundred a year, there are a lot of restless dead in Indianapolis. What’s a conventional, Catholic cop to do?

Catch the crook, get the guy, and say a few Hail Marys just to be safe. 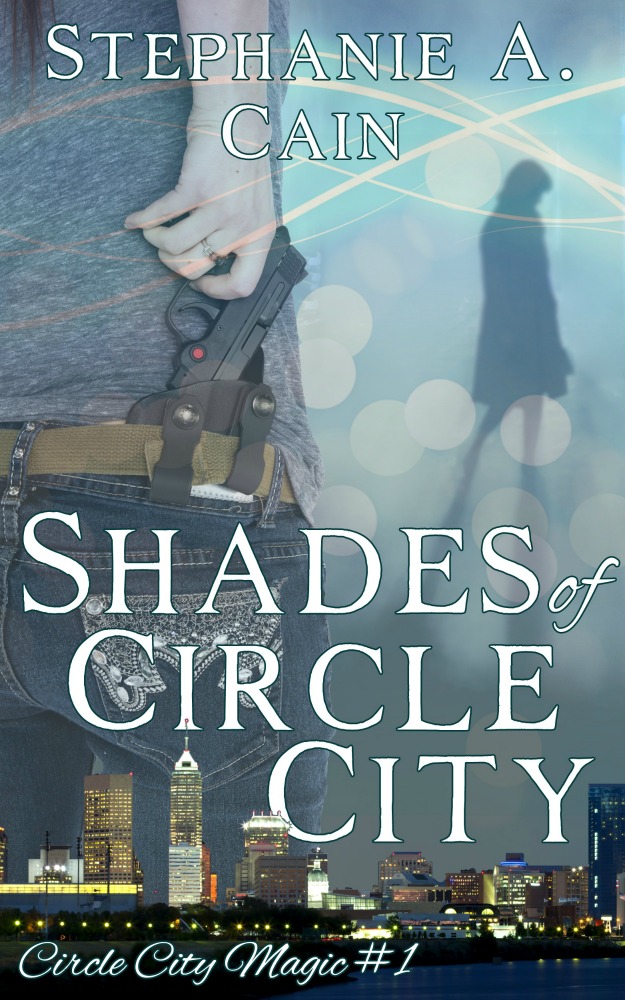 My favorite bit of Shades of Circle City is an accident–or, really, a series of accidents.

I’m a member of a fantastic writing group called IndyScribes, and when I came to them with Shades of Circle City, I had already completed one revision. A member of my writing group took one look at the name Braxton Wolfe and commented, “He’s a werewolf, right?”

“Sure!” I decided, and frantically scribbled an entirely new set of scenes to work in that subplot.

When I introduced the rest of the wolfpack, I threw in a skinny, angry guy named Murphy O’Hare who had been bitten, unlike the rest of the members of the pack, who are hereditary wolves.

Another member of my writing group said, “Oooh, there’s a lot of backstory to that, isn’t there?”

“Sure!” I decided, and frantically scribbled an entirely new set of scenes to work in that subplot.

When I explained in a later scene that Braxton’s father had dealt with the werewolf who turned Murphy, yet another member of my writing group said, “I bet that’s what really killed Braxton’s father, isn’t it?”

“Sure!” I decided, and…you know the drill, right?

To be completely honest, if I didn’t have the IndyScribes, this book wouldn’t be half the novel it is today, and I mean that both literally and figuratively (it was a lot shorter before the werewolves jumped in).

As much as I love my main characters, I have to confess, I’m a sidekick girl. I’m a minor characters girl. I love Samwise and Boromir more than Frodo and Aragorn. I love Robin more than Batman. And… I love Murphy more than Braxton.

Not as a romantic partner for Chloe, and I imagine I’d actually enjoy hanging out with Braxton more than I would Murphy. Murphy isn’t a comfortable guy to be around. He’s snarky and angry and he’s dealing with a dozen changes in his life as well as struggling against poverty as a high-school dropout, and despite all that, he’s strong and brave and loyal, in his own prickly, Murphy kind of way.

My favorite bit of Shades of Circle City is when Murphy finally gets it through his head that one good thing about being bitten is the pack he acquired with it. The family he acquired. Because pack, as Braxton points out more than once in the novel, is family.

As he worked, Braxton considered what should be done. There were plenty of magic-users in Indianapolis, and he didn’t have a problem with most of them. The vast majority were benevolent types, or at the very least, petty in their selfish use of magic. People using their talent to make ends meet didn’t bother him, as long as they weren’t hurting anyone else. But now there was a magic-user who had hurt one of his pack. And not only that, but she had helped turn someone. It was inexcusable. Something would have to be done.

Finally he rocked back on his heels and rubbed a hand over his face. “Murphy,” he said, trying to make his voice gentle but firm. “You aren’t a lone wolf anymore. I appreciate what you were trying to do, but that isn’t how we operate. We’re creatures of the pack. We work better together.”

Murphy met his gaze for half a second and then looked down. “I just…I owe you. I couldn’t—”

“Yes,” Braxton interrupted, “you could. We don’t keep score. Not in this pack.”

“Which is what I’ve been trying to tell you,” Tara put in, her voice sardonic. Murphy’s scowl deepened, but his shoulders relaxed.

This happens late in the book, because Murphy has a lot of anger and guilt and confusion to overcome. He’s on a journey that’s a little different from the others, but when he finally gets it, it feels incredibly satisfying to me.

Of course, things go to hell right after that, but it’s still a little moment of, “Hey, Murphy’s gonna be all right, after all.”

And that’s my favorite bit.

Shades of Circle City is available as a print or ebook from Amazon, as well as an ebook from Barnes & Noble, Kobo, iBooks, and Smashwords. Purchase links for all distributors are available here: http://www.stephaniecainonline.com/books/shades-circle-city/

A proud crazy cat lady, she is happily owned by Eowyn, Strider, and Eustace Clarence Scrubb. In her free time, she enjoys hiking (except for the spiders), bird-watching, and reading. She enjoys organizing things and visits office supply stores for fun. She owns way more movie scores and fountain pens than she can actually afford.

She can be found online at www.StephanieCainOnline.com.