Stephanie Burgis is joining us today with her novel Congress of Secrets. Here’s the publisher’s description:

In 1814, the Congress of Vienna has just begun. Diplomats battle over a new map of Europe, actors vie for a chance at glory, and aristocrats and royals from across the continent come together to celebrate the downfall of Napoleon…among them Lady Caroline Wyndham, a wealthy English widow. But Caroline has a secret: she was born Karolina Vogl, daughter of a radical Viennese printer. When her father was arrested by the secret police, Caroline’s childhood was stolen from her by dark alchemy.

Under a new name and nationality, she returns to Vienna determined to save her father even if she has to resort to the same alchemy that nearly broke her before. But she isn’t expecting to meet her father’s old apprentice, Michael Steinhüller, now a charming con man in the middle of his riskiest scheme ever.

The sinister forces that shattered Caroline’s childhood still rule Vienna behind a glittering façade of balls and salons, Michael’s plan is fraught with danger, and both of their disguises are more fragile than they realize. What price will they pay to the darkness if either of them is to survive? 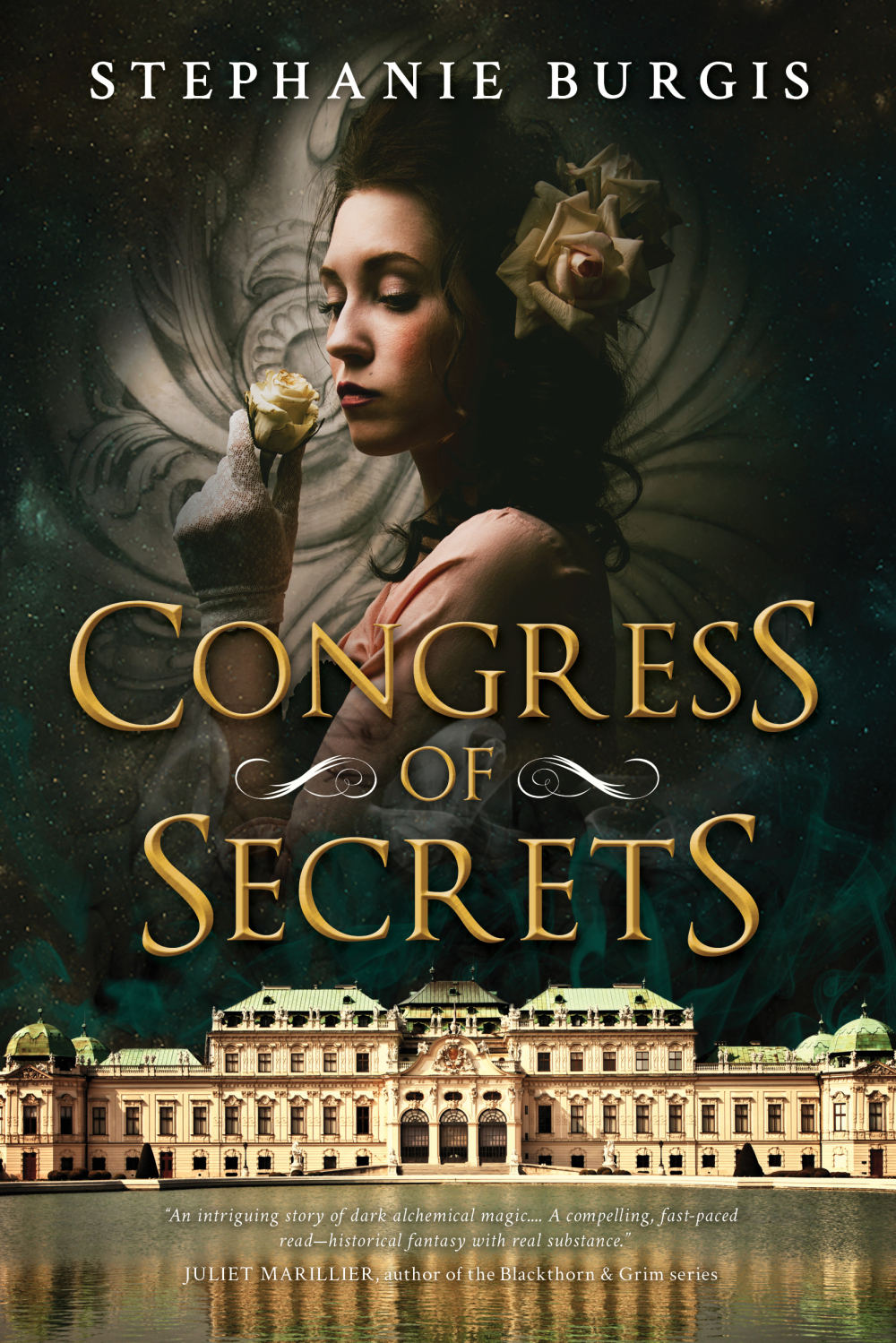 Vienna has had a hold on my family’s imagination for a very, very long time.

Over a hundred years ago, my Croatian great-grandfather traveled to Vienna as a teenager to be a tailor’s apprentice. He wandered around the city in awe of its beauty and culture. He attended Mass in the Stefansdom cathedral, where Mozart had been married. He went back to Croatia to be with his family once his apprenticeship was finished…but then World War I broke out, and he fled to America, never to see Vienna again.

Still, he never forgot that city. Living in Youngstown, Ohio, he raised his children on stories of Vienna’s beauty. The best of everything was in Vienna, he told them! My grandfather, his youngest son, learned German at home before he learned English in kindergarten, and needless to say my mother and I both ended up studying German too at various points, drawn by the romance of all those family memories. When I announced, at nineteen, that I’d be studying in Vienna as part of a college exchange program, my grandfather was delighted.

Still, I had no idea just how hard I would fall in love with Vienna when I got there. It didn’t hurt, of course, that I was already obsessed with eighteenth-century music history – and Mozart, Haydn and Beethoven all lived and performed there at various points. Vienna was the center of musical culture in the Classic era.

But then you add in the gorgeous palaces, the cobblestoned streets, and oh, yes, the amazing cakes and coffee…yeah, I was a goner.

As soon as I got back to America, I scrambled to find an excuse – any excuse! – to return to Vienna. I ended up applying for and winning a Fulbright scholarship to study at the University of Vienna for a year and teach at a Viennese secondary school. And when I met my British husband a few years later, it only made sense for us to spend 6 months living in Vienna before we moved together to the UK.

Finally, a few years later, I made it back once again, this time funded by an academic grant to research my PhD thesis (on opera and politics in eighteenth-century Vienna) by studying original eighteenth-century manuscripts at the Austrian National Library…which just happens to be located in the magnificent Hofburg palace in Vienna.

Every day for two weeks, I sat at one of the long wooden tables in the music library, poring over delicate eighteenth-century operatic scores, while the smell of blooming lilacs drifted in through the open windows…

…But every afternoon when the library closed, everything changed. I stopped thinking about music or about my PhD thesis. Instead I wandered through the narrow cobblestoned streets of Vienna’s first district with a very different book in mind.

I was already plotting out Congress of Secrets, my historical fantasy novel set at the Congress of Vienna in 1814. And it was an incredible historical moment for the city.

Aristocrats and royals from all across Europe gathered in Vienna that year to celebrate the downfall of Napoleon with glittering fêtes, ceremonies, balls and gossip. At the same time, behind that glittering round of social festivities, diplomats from all of those countries were hard at work fighting their own metaphorically bloody political battles, negotiating to re-divide the continent after decades of war.

Meanwhile, the Austrian emperor’s paranoia had led to the development of a terrifyingly powerful Viennese secret police force that spied on everyone. Vienna had once been famous for coffee houses where everything and everyone could be freely debated; by 1814, no one dared discuss politics in public anymore, for fear of being turned in by one of the secret police’s many informants. It wasn’t only the local Viennese who were under inspection, either. During the Congress, the secret police kept an eye on everyone. Local servants went through the fireplaces of important visitors, pulling out letters to be turned into the secret police, and Emperor Francis received regular reports.

That would be an incredibly rich and fascinating historical setting for any writer to play with, even without any magical component. But of course, in my version of events, Francis isn’t just getting his strength from information. He’s also been secretly resorting to dark alchemy for years…

…as my heroine knows all too well. Her childhood was destroyed by the dark alchemy hidden behind Vienna’s glamorous façade. Now she’s back under a new identity, using the Congress as her excuse to return to her first home and finally save her father from imprisonment…

…But only if the secret police don’t find out her true identity – and if she isn’t tripped up by the competing schemes of her father’s old apprentice, now a charming conman working on his biggest gamble yet.

All of those disguises, deceptions and schemes are tied inescapably to the narrow streets and palace corridors of Vienna, my favorite city in the world. There’s darkness, there’s intrigue, there’s the kind of magic that can kill your soul, and there’s even unexpected romance…

…But none of it could take place anywhere but in Vienna.

The truth is, I agree with my great-grandfather. I’m still in love with that city, too!

Stephanie Burgis grew up in East Lansing, Michigan and now lives in Wales, surrounded by castles and coffeeshops. She is the author of two historical fantasy novels for adults, MASKS AND SHADOWS and CONGRESS OF SECRETS, both published in 2016 by Pyr Books. She also writes MG fantasy novels, and her MG Regency fantasy trilogy, KAT, INCORRIGIBLE, was published by Atheneum Books, an imprint of Simon & Schuster. To find out more and read excerpts from her novels, please visit her website: www.stephanieburgis.com