Renee Patrick is joining us today with their novel Design for Dying. Here’s the publisher’s description:

Los Angeles, 1937. Lillian Frost has traded dreams of stardom for security as a department store salesgirl . . . until she discovers she’s a suspect in the murder of her former roommate, Ruby Carroll. Party girl Ruby died wearing a gown she stole from the wardrobe department at Paramount Pictures, domain of Edith Head.

Edith has yet to win the first of her eight Academy Awards; right now she’s barely hanging on to her job, and a scandal is the last thing she needs. To clear Lillian’s name and save Edith’s career, the two women join forces.

Unraveling the mystery pits them against a Hungarian princess on the lam, a hotshot director on the make, and a private investigator who’s not on the level. All they have going for them are dogged determination, assists from the likes of Bob Hope and Barbara Stanwyck, and a killer sense of style. In show business, that just might be enough.

The first in a series of riveting behind-the-scenes mysteries, Renee Patrick’s Design for Dying is a delightful romp through Hollywood’s Golden Age. 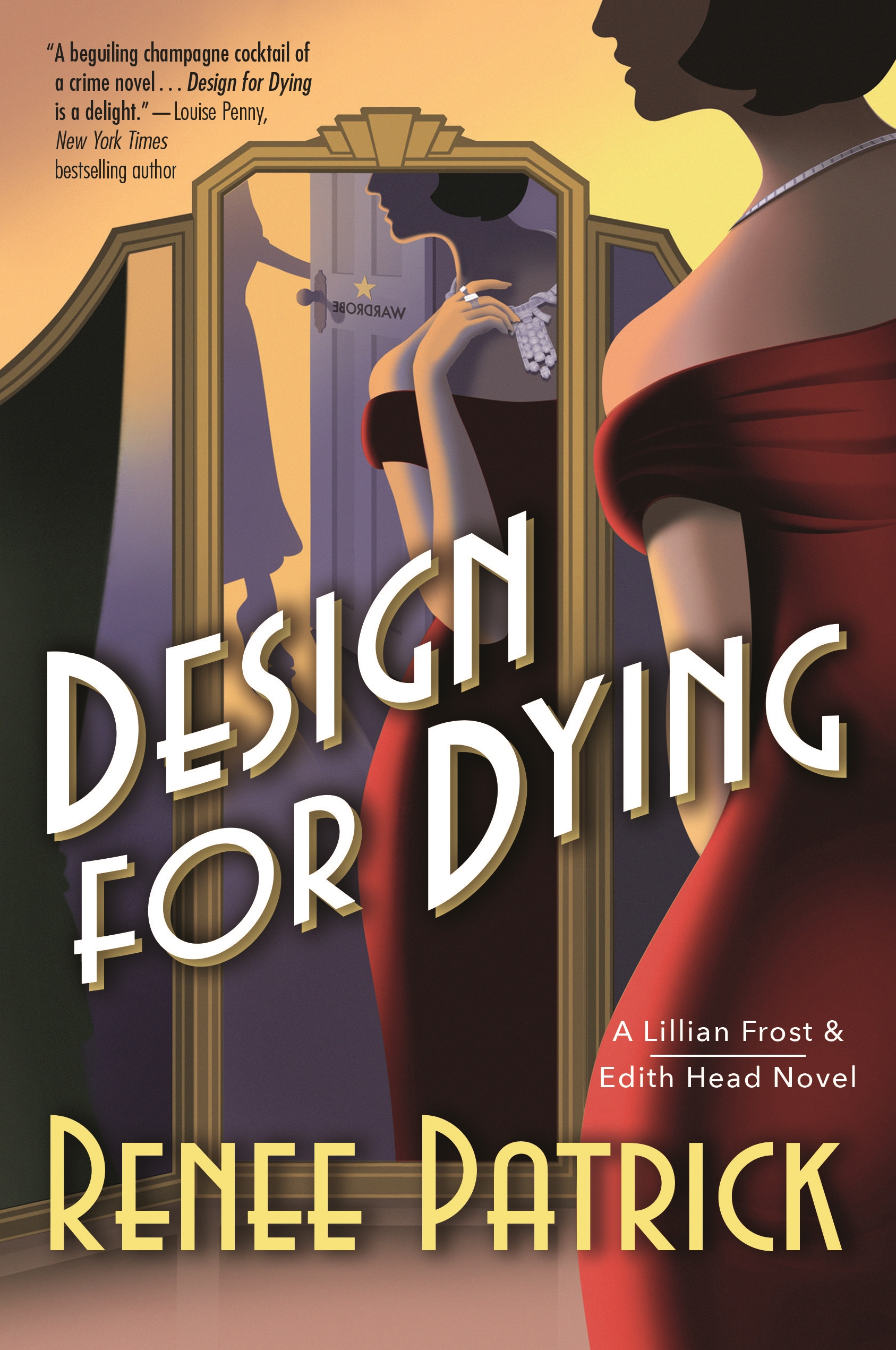 One half of the detective duo in Design for Dying, our mystery set during Hollywood’s Golden Age, is Edith Head. The real-life costume designer had a remarkable career spanning six decades, over five hundred films, and thirty-five Academy Award nominations. She inspired Edna Mode in Pixar’s The Incredibles. She was on a postage stamp.

The other half? Lillian Frost, a good Catholic girl from Queens, New York, who ventured west to become a star, quickly realized fame wasn’t in the cards, and settled for security as a clerk in Los Angeles’ second-best department store.

What these unlikely allies have in common is our favorite bit. Namely, they understand that each movie has a secret history, hidden in plain sight.

Edith came by this knowledge through her position at Paramount Pictures. Lillian learned it through family. Here, she describes what she brought with her to California:

What I did have was a love of the movies and an appreciation for the labor it took to make them. Both came courtesy of my uncle Danny, who toiled for years as a set painter at the Paramount Studios in Astoria. He’d bring me to work with him occasionally, telling me to church mouse in a corner. I’d drink in the hubbub behind the scenes then marvel at the transformation that occurred when the cameras rolled. Actors would take their places, and the flats that Uncle Danny and his boisterous pals had erected and painted would become a banker’s office or a police station before my eyes. In the soft flicker of light at the Prospect Theater in Flushing, I’d thrill whenever Danny leaned over and whispered, I did that bit there, pet. Thanks to Danny, hard work and magic were indistinguishable for me.

The stories told by people who work on films are seldom about the finished product. They’re about punching the clock. The day we shot that scene, it was only seventeen degrees. The dog in that movie hated me for some reason. I could hardly breathe in that dress. Their experiences, understandably, will be colored by purely practical concerns. They were doing a job.

Creating timeless glamour takes true effort. Edith Head knew this all too well. She collaborated with scores of directors and producers to render their visions in fabric and thread. Actors speak of “going from the outside in,” using external signifiers like wardrobe to help them discover their characters. Edith would be at their side when these performers were at their most vulnerable: stripped of their handlers and retainers, before they’d selected the necessary tools, fearful of how their decisions would play out on towering silver screens around the world.

There are no secrets in a dressing room. What better place for an amateur sleuth?

The story being told onscreen isn’t the only one. It may not even be the best one. That conundrum lies at the heart of every backstage drama from 42nd Street to The Larry Sanders Show. Critic Gene Siskel would apply a simple yardstick: “I always ask myself, ‘Is the movie that I am watching as interesting as a documentary of the same actors having lunch together?’”

We were intrigued by the notion of spinning new stories from these secret histories, of isolating elements from movies and constructing a fictional narrative around them. A gown from a forgotten 1936 crime drama, The Return of Sophie Lang. A set built for College Swing, a gossamer 1938 musical-comedy. Even famous faces like actress Barbara Stanwyck and Edith herself. We wanted to fold reality in on itself and produce something familiar, but different.

With a lot of jokes in it.

Renee Patrick is the pseudonym of married authors Rosemarie and Vince Keenan. Rosemarie is a research administrator and a poet. Vince is a screenwriter and a journalist. Both native New Yorkers, they currently live in Seattle, Washington.

1 thought on “My Favorite Bit: Renee Patrick talks about DESIGN FOR DYING”