Patricia Burroughs is joining us today with her novel This Crumbling Pageant. Here’s the publisher’s description.

Persephone Fury is the Dark daughter, the one they hide.

England, 1811. Few are aware of a hidden magical England, a people not ruled by poor mad George, but the dying King Pellinore of the House of Pendragon.

The Furys are known for their music, their magic, and their historic role as kingmakers. When Fury ambitions demand a political marriage, Persephone is drugged and presented to Society–

But devious and ruthless, Persephone must defy ancient prophecy, embrace her Dark magic, and seize her own fate.

Get swept away into the first book of a dark fantasy series combining swashbuckling adventure, heart-pounding romance, and plot-twisting suspense. 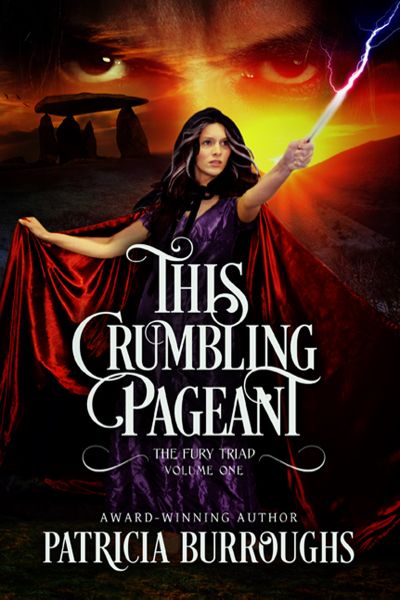 Whether the story is Star Wars, The Matrix, or Harry Potter, when our hero carries the burden of powers he doesn’t understand and can’t control, he must eventually turn himself over to a Mentor who will teach him.

It was only when I began looking at the larger plotting implications of This Crumbling Pageant that I realized that instead of a benevolent Yoda, or Morpheus, or Dumbledore, I was flinging a vulnerable, desperate young Persephone Fury into the grasp of the villain, as he is the only mentor who can teach her how to control and understand the Dark magic that has been seething within her since birth.

As a child, Persephone had begged her brothers’ tutor, Vespasian Jones, to teach her, as well. But he had refused, and she had come to loathe him. Now, for traitorous reasons of his own, he needs her magic… her wild, Dark magic, even though he despises her. And, despite her hatred of him and all he stands for, she finally is forced to accept that he is the only one who can teach her how to control and understand the Shadows that have been seething within her since birth.

Inside this rustic cottage she heard nothing but—

She was not alone.

Whoever was with her was as still and watchful as she. Her fingers longed to flex in defence, but she kept them still. Was it someone she could overcome? With her magic tingling in her veins and her rage at what had been perpetrated upon her, she knew she could. She could overcome anyone who dared stand in her way.

She allowed her eyes to open completely and, after a moment, saw beyond the feeble light from the small window and into the gloom of the dark corner. Another blink, and shape emerged. Long legs stretched forward. Elbows were planted on the arms of a chair. Long, pale fingers steepled and glittering black eyes stared over them at her. A predator, watching. Waiting.

She shot up, the pain in her right shoulder tearing through her. “How dare you!”

His wand flicked out, aimed at her heart, though beyond the movement of that one agile hand, the rest of his body remained as still and dangerously relaxed as before. “Quite easily,” he purred.

Her purple gown, once a source of horror and then of wondrous pride, now was ripped open with a bandage and too much skin showing beneath it. She covered herself with both hands, enraged. “What sort of blackguard watches a young lady sleep?” she demanded, her heart pounding. “And… and…” She found herself unable to voice her shock and alarm at being faced with a wand again, much less the sort of man who would possess one.

A shudder of revulsion rippled through her.

“I’ve not been watching you sleep. I’ve been watching you awaken.” The wand twitched. “Consider carefully any move you make, because if I even suspect that you are about to attack me again, you will be chastened. Again.”

Chastened? Was that what he called it?

His voice was silky and menacing in the gloom. “Unless you’d like a wound in your left shoulder to match that on your right?”

She drew back in fear, despite herself.

“Ah, so we have an understanding.”

He twirled his wand through his slender, nimble fingers and then back into his palm again.

Persephone is a prickly bluestocking, a bit of a know-it-all who unfortunately doesn’t quite know everything she thinks she does. She is also a noble, valiant young lady who will do anything—anything—to help and protect her family, even drink a drugged tisane to dull her powers. And yet,despite it all, she finds herself with nowhere to turn, nobody to trust except her worst enemy: the villain she despises who is trying to destroy everything she holds dear.

If instead of Obi Wan Kenobi, Luke had to turn himself over to Darth Vader’s mentorship…

If instead of Morpheus, Neo had to train under Agent Smith…

If poor Harry had to embrace the darkest pieces of himself by submitting to Voldemort, instead of being surrounded by friends and mentors at Hogwarts…

That’s what I did to Persephone.

What was I thinking?

Yes, she’s ruthless, devious, and clever, but can she learn from evil without absorbing more evil herself? Can she submit to evil and embrace her powers without being overcome by them?

This element, dear reader, is my favourite bit of This Crumbling Pageant.

And if that makes me a bit evil, myself? I can live with that.

Award-winning screenwriter and best selling novelist Patricia Burroughs loves dogs, books, movies, and football. A lifelong Anglophile, she treasures her frequent travels in the British Isles researching The Fury Triad, the epic fantasy that has taken over her life and heart. She is a Nicholl Fellow, a proud member of Book View Café, and a fifth-generation Texan. She and her high school sweetheart husband are living happily ever after in their hometown of Dallas, Texas.

3 thoughts on “My Favorite Bit: Patricia Burroughs talks about THIS CRUMBLING PAGEANT”