Michael J. Martinez is joining us today with his novel MJ-12: Shadows. Here’s the publisher’s description:

It’s 1949, and the Cold War is heating up across the world. For the United States, the key to winning might be Variants―once ordinary US citizens, now imbued with strange paranormal abilities and corralled into covert service by the government’s top secret MAJESTIC-12 program. Some Variants are testing the murky international waters in Syria, while others are back at home, fighting to stay ahead of a political power struggle in Washington. And back at Area 51, the operation’s headquarters, the next wave of recruits is anxiously awaiting their first mission. All the while, dangerous figures flit among the shadows and it’s unclear whether they are threatening to expose the Variants for what they are . . . or to completely destroy them. Are they working for the Soviet Union, or something far worse? 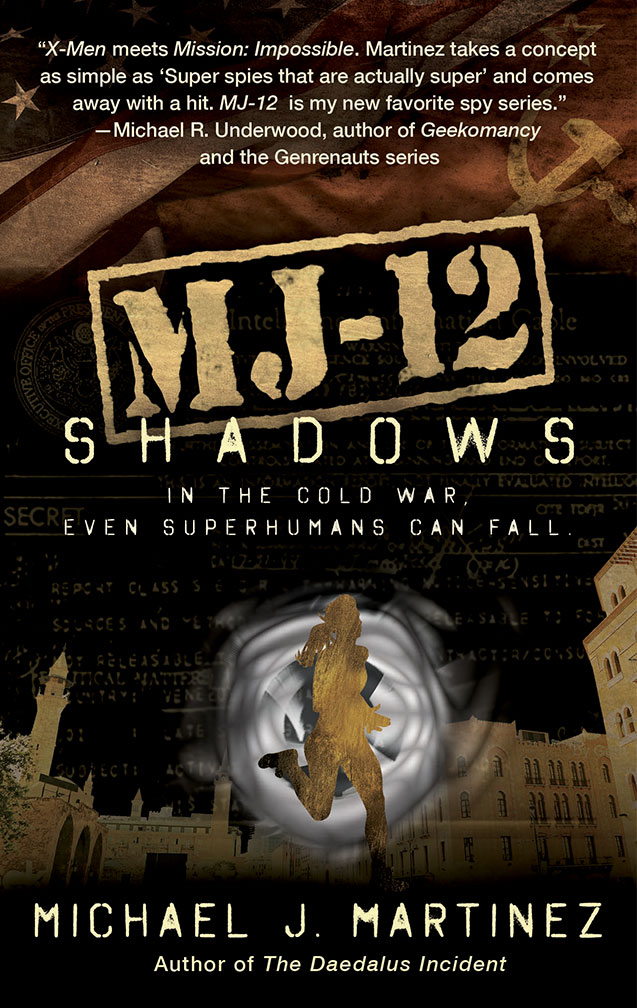 As my ever-gracious host is no doubt aware, one of the benefits of writing historical fiction is leveraging actual history for one’s work. And sometimes, there’s just a piece of history that seems too good to be true.

There’s a very real series of historical events in MJ-12: Shadows – the CIA’s ham-handed efforts to install a strongman in Syria in 1949 so that, yes, the new government would agree to extend an oil pipeline through Syria to the Mediterranean coast. (Sadly, things never seem to change.) One incident during this CIA campaign stood out.

The CIA efforts were led by an officer named Miles Copeland. Up until the records of his activities were declassified, Copeland was known largely as an intelligence policy commentator and author – and the father of Stewart Copeland, drummer for the Police. Small world indeed.

But now the cat’s out of the bag and we’re starting to get details about early intelligence efforts during the Cold War. Most of it is stranger than fiction to some degree or another, and Copeland’s Syria activities are no exception.

Copeland and his partner, Stephen Meade, spearheaded the CIA’s efforts in Syria to destabilize Syria’s democratically elected government and install Hosni al-Za’im, America’s preferred military strongman. And by spearheaded, I mean they were basically the only agents there, and had more petty cash and bad ideas than common sense. Honestly, it’s kind of amazing they came out alive.

One of the key’s to Copeland’s efforts was to sway international opinion of the democratic government, and Copeland thought that if the government was seen violating diplomatic norms, that would do the trick. So he let slip that he was keeping super-secret, critical information about the Syrian government at his house.

Copeland thought that the government would then send a burglar to retrieve the documents, and Copeland could catch said burglar in the act and give the government a black eye.

To say things didn’t work out as planned is a monumental understatement. I almost didn’t put the incident into MJ-12: Shadows because it seemed too far-fetched…for a novel about super-powered covert agents, no less.

But I did, so I won’t spoil it here. It’s my favorite bit in MJ-12: Shadows and the MAJESTIC-12 series thus far. I hope you’ll check it out.

Michael J. Martinez is the author of the Daedalus trilogy of Napoleonic era space opera adventures as well as the MAJESTIC-12 series of superpowered spy-fi thrillers. He likes mashing genres together, obviously. His short fiction has appeared in Unidentified Funny Objects 4, Cthulhu Fhtagn!, Geeky Giving and The Endless Ages Anthology for Vampire: The Masquerade. He lives with his very understanding wife and amazing daughter in the New Jersey suburbs, which are neither understanding nor amazing. He can be found online at michaeljmartinez.net and on Twitter at @mikemartinez72.