Ferrett Steinmetz is joining us today with his novel The Uploaded. Here’s the publisher’s description:

Life sucks and then you die… a cyberpunk family drama from the ingenious author of Flex.

In the near future, the elderly have moved online and now live within the computer network. But that doesn’t stop them interfering in the lives of the living, whose sole real purpose now is to maintain the vast servers which support digital Heaven. For one orphan that just isn’t enough – he wants more for himself and his sister than a life slaving away for the dead. It turns out that he’s not the only one who wants to reset the world… 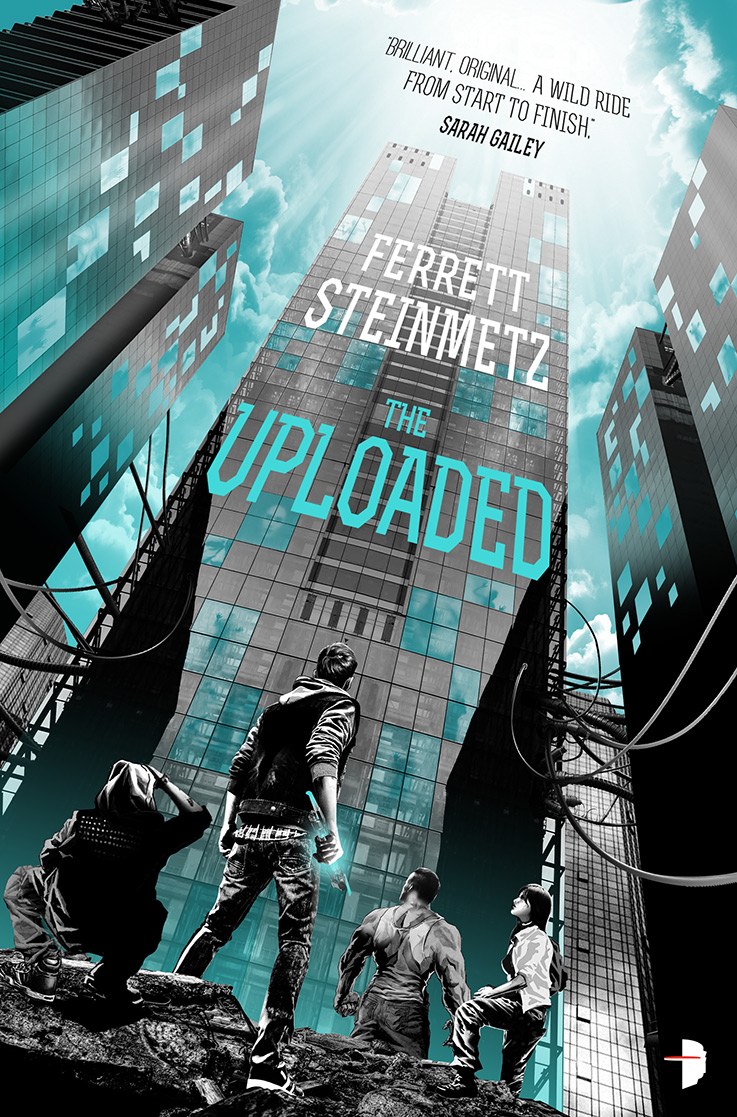 As a Christian, I generally see two types of Christians in science fiction books.  Neither reflects my reality.

The first is what I call the “smash and crash” Christian – whatever scientific wonder has been devised to make everyone’s lives better, these Christians hate it as though it were emitted straight from Satan’s bowels.  They’re greedy for power, preaching to vacuous congregations without a single neuron to share between them, raising crowds of wrench-wielding Luddites to show up in the third act and wreck whatever miracle machinery is improving the world.

Why do these stone-throwing zealots despise the miraculous?  It’s never really explained.  In these books it’s taken as a given that a Christian is not only diametrically opposed to science, but unable to wield it.  So they’re book-dumb, though if they’re lucky they may be possessed of a crude cunning, not unlike a stoat or a weasel.

Ah, but what if the author’s sympathetic to religion?  Then you get the “hugs and mugs” Christian, who wraps you in a warm embrace before bringing you a mug of decaffeinated herbal tea.  This Christian wears cool sweater-vests and serves as a faith-flavored psychiatrist, never judging anyone except when they’ve done something so bad the plot requires the protagonist the be course-corrected back on the road to heroism.  They may even flirt a little, just enough to provide fan-shipping possibilities.  Their faith is diffuse, their beliefs never so firm as to inconvenience anyone.

What I rarely see in novels is Christianity’s morality in justifiable opposition to the main characters’ goals.  A faith with teeth, if you will.  A faith where yes, perhaps their beliefs start with the Bible but grows to object to this so-called wonder technology for both pragmatic and compassionate reasons.

Which wasn’t too hard to create in my novel The Uploaded, given it’s all about what happens 500 years after humanity’s perfected its computerized Heaven.  Digitally preserving people’s brains is the big social change that’s transformed humanity as we know it.  Nobody worries about meat-deaths any more – when your body kicks off, the last saved copy of your consciousness gets uploaded to the Upterlife’s game servers, where you can choose to check in on Earth or play in the most vividly imagined MMORPGs for all eternity.

Which sounds good, but… like most world-changing technologies, it’s had long-term, unforeseen consequences.

Because when you know for-sure there is a palpable, verifiable Heaven, you let the rest of the world slide.  Your view shifts myopically to focus on the reward; society has to place laws against suicide to ensure you stick around to keep the servers running.  Cruelty gets written off; why should someone care how cruel they are to you in life when you’ve got an eternity of pleasure awaiting you when you die?  The living are sold into slavery, kept in line through venal promises of unlocking bonus treasures in the Upterlife.  The sick are cut down with a laugh.

And if you’re a Christian with serious beliefs, not only is this new technology corrupting the world and encouraging callous evil, but people are confusing souls with programs.  Yes, it’s very nice that there’s a simulation of your dead Mom talking to you, and it’s certainly a beautiful replication, but… that set of computerized emotions can vote.  It can own property.  It can decide who gets access to vital, life-saving technology and who doesn’t   – and because the dead’s priorities are always dead-first, the best and brightest tech goes to upgrading the Upterlife servers.

It’s bad enough when people are following false prophets, but these prophets aren’t even real.  They’re just… simulated echoes of what someone used to be.  With each passing year inside the servers, these replicas forget what it was like to be human.  Yet they’re in charge.

Worst of all, the Upterlife is popular.  A lot of so-called Christians, when a virtual Heaven is dangled before them, forget immediately about the real thing and accept this rampant cruelty.

And if you’re a Christian – a true Christian – do you have any choice but to oppose this?  You can’t hope for political change; there are twenty generations of dead, and even if every living person voted for something they’d never get their agenda through if the dead opposed it.  You can’t persuade people; the dead sift through the saved brain-scans of potential Upterlife applicants, and if the applicant’s too rebellious they’re condemned to die an ugly meat-death.

Your only choice is to rebel through physical force.  To take up the sword.

They call it crime.  You call it your only choice.

And so my favorite bit in The Uploaded is Evangeline, the young NeoChristian who’s spent her entire life training for the moment she can take down the servers.  The other characters in The Uploaded, who were raised in the post-Upterlife society, think she’s dumb; she’s not.  She uses technology just fine, can field-strip a rifle and hijack a spirocopter better than any of them.  They think she’s thuggishly violent.  They think she’s deluded by her sky-beard.

She’s not.  She sees the pain the Upterlife has created clearly, simply because her faith has not numbed her to suffering but attuned her to it.  She knows that God offered Adam and Eve stewardship of the Earth, and so there’s a better world to be created from the ruins of this one.  And she knows the cost of fighting this new and monstrous society, because she’s watched her fellow NeoChristians get abducted and tortured – but she’s loathe to kill not because she believes it’s a sin, but because she’s unwilling to condemn the ignorant to Hell without giving them a chance.

She’s afraid.  But she knows who also died to save mankind, and He gives her strength.  Which is why she’s willing to risk having her brains ripped apart by the brainwashed servants of the servers.

She’s not naive.  She’s not misguided.

Excerpt of the first two chapters

Ferrett Steinmetz’s debut urban fantasy trilogy FLEX (and THE FLUX and FIX) features a bureaucracy-obsessed magician who is in love with the DMV, a goth videogamemancer who tries not to go all Grand Theft Auto on people, and one of the weirder magic systems yet devised. His latest book THE UPLOADED, well, you just read about it, didn’t you?  He was nominated for the Nebula in 2012 and for the Compton Crook Award in 2015, for which he remains moderately stoked, and lives in Cleveland with his very clever wife, a small black dog of indeterminate origin, and a friendly ghost.

He Tweeters at @ferretthimself, and blogs entirely too much about puns, politics, and polyamory at www.theferrett.com.