Marie Brennan is joining us today with her novel Within the Sanctuary of Wings. Here’s the publisher’s description:

After nearly five decades (and, indeed, the same number of volumes), one might think they were well-acquainted with the Lady Isabella Trent–dragon naturalist, scandalous explorer, and perhaps as infamous for her company and feats of daring as she is famous for her discoveries and additions to the scientific field.

And yet–after her initial adventure in the mountains of Vystrana, and her exploits in the depths of war-torn Eriga, to the high seas aboard The Basilisk, and then to the inhospitable deserts of Akhia–the Lady Trent has captivated hearts along with fierce minds. This concluding volume will finally reveal the truths behind her most notorious adventure–scaling the tallest peak in the world, buried behind the territory of Scirland’s enemies–and what she discovered there, within the Sanctuary of Wings. 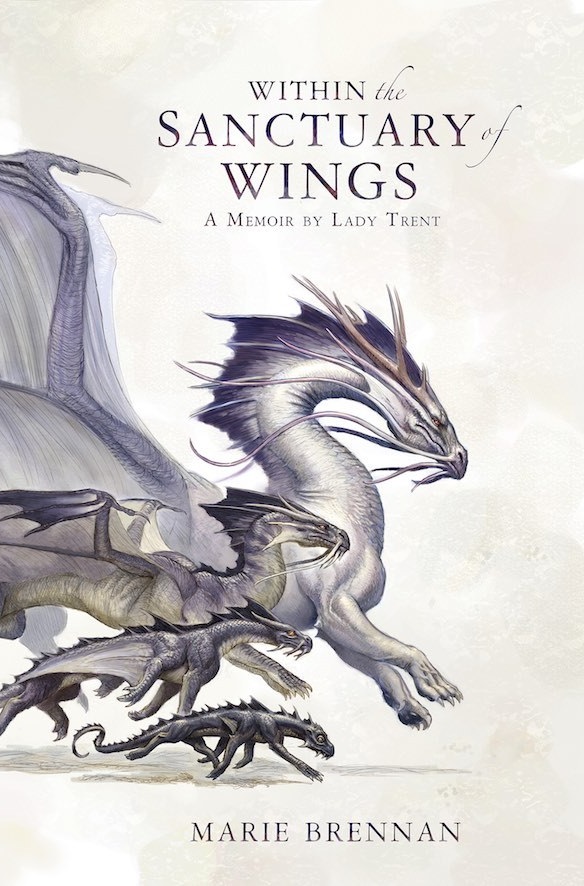 My favorite bit of Within the Sanctuary of Wings in specific, and the Memoirs of Lady Trent as a whole, is the ending.

And I mean the very ending. Not the climax of the story, but literally the last 120 words of the book.

Which surprises me, because man, those last few sentences? They’re usually one of the hardest parts for me. It’s tough to end a short story, tougher to end a novel, and a whole series? Yeeks. The weight there is enormous. Five books about Lady Trent, taking her from childhood to her status as one of the most famous and respected people in the world — how do you end that? What knot do you use to tie off the ends when the pattern is done?

I expected it to be incredibly hard. I made my way through the Afterword, handling the usual tasks of denouement, and all the while a little voice in the back of my head was asking, what note are we going end on? What flavor do I want to leave in the reader’s mind when they close the book?

And then it came to me. The instant I thought of it, I knew it was right, and those last 120 words flowed out of me like . . . well, like a couple of tears might have done, had I not sniffled them back.

I could quote the passage to you right now, because it isn’t a spoiler. It’s the inevitable consequence of what the story has been about this entire time — the energy at its heart. But I don’t think it will have quite the same impact when taken out of context, so instead I’ll tell you that Lady Trent’s final words to her readers are about science and the ever-changing face of what we know about the world around us. Isaac Newton once said, “If I have seen further, it is by standing on the shoulders of giants.” There are no dragons in our world, and so no one can quite stand on Lady Trent’s metaphorical shoulders; but nonetheless it’s an invitation to do exactly that, to carry forward the work of discovery for generations to come.

I hope that when you get there, you do, too.

Marie Brennan is a former anthropologist and folklorist who shamelessly pillages her academic fields for material. She is currently misapplying her professors’ hard work to the Victorian adventure series The Memoirs of Lady Trent; the first book of that series, A Natural History of Dragons, was nominated for a World Fantasy Award. Cold-Forged Flame, the first novella in the Varekai series, came out in September 2016. She is also the author of the Doppelganger duology of Warrior and Witch, the urban fantasies Lies and Prophecy and Chains and Memory, the Onyx Court historical fantasy series, and more than forty short stories. For more information, visit www.swantower.com.