Laura Lam is joining us today to talk about her novel Shattered Minds. Here’s the publisher’s description:

Laura Lam returns to the near-future SF world of False Hearts with the speculative thrillerShattered Minds.

Carina used to be one of the best biohackers in Pacifica. But when she worked for Sudice and saw what the company’s experiments on brain recording were doing to their subjects, it disturbed her?especially because she found herself enjoying giving pain and contemplating murder. She quit and soon grew addicted to the drug Zeal, spending most of her waking moments in a horror-filled dream world where she could act out her depraved fantasies without actually hurting anyone.

One of her trips is interrupted by strange flashing images and the brutal murder of a young girl. Even in her drug-addicted state, Carina knows it isn’t anything she created in the Zealscape. On her next trip, she discovers that an old coworker from Sudice, Max, sent her these images before he was killed by the company. Encrypted within the images are the clues to his murder, plus information strong enough to take down the international corporation.

Carina’s next choice will transform herself, San Francisco, and possibly the world itself. 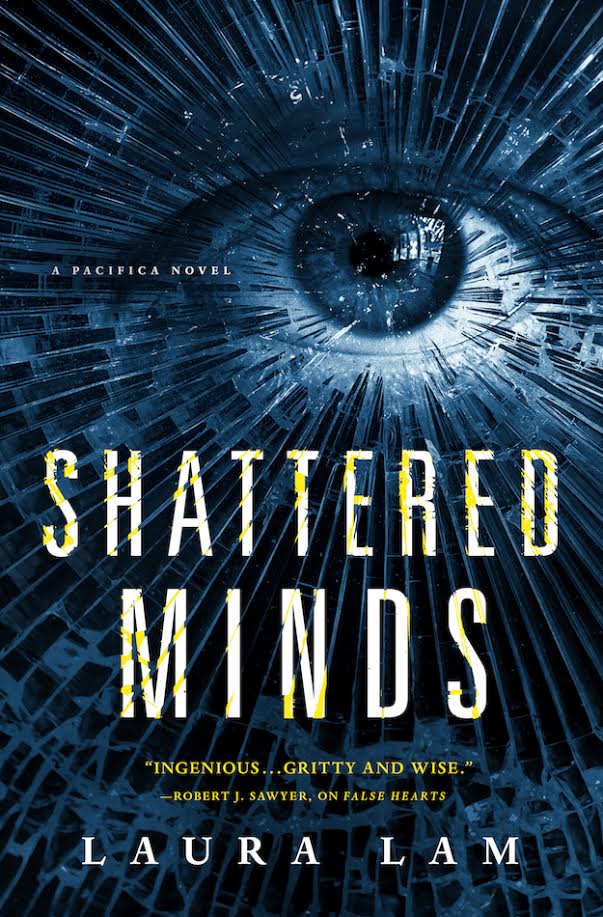 My favourite bit of Shattered Minds is my villain. Or my villains, rather, depending on how you view the book.

Boring villains can make for very boring stories. I’m not as interested in tales where the antagonist is evil because They Are Evil in All Capital Letters. I want to hate the protagonist, sure, but I also want to empathize with them—to be able to put myself in their shoes, to see them as a protagonist of their own stories, even if their motives are pretty awful.

As my previous books have all been in first person, I haven’t really been able to get inside the head of my villains in the same way I could with Shattered Minds. With Tila in False Hearts, the previous standalone in the same world that came out next year, she was a morally grey sister to her twin, Taema, but you knew she wasn’t truly evil. But writing a brasher, more manipulative character was really interesting, so in Shattered Minds, I dialled that up a lot.

In some ways, Shattered Minds is a tale of two villains rather than a tale of two siblings. The first villain is our protagonist, Carina. She’s a serial killer who doesn’t want to kill innocents, so she becomes addicted to the dream drug Zeal so she’s only killing people in her imagination. Carina is prickly and in many ways unlikeable, but my hope is that you still root for her. She, at least, has a glimmer of a conscience.

Roz, her former boss, does not. I saw a review recently that described her as “an unholy blend of Orphan Black’s Cosmina and Rachel” and I’m totally stealing that. She’s someone who finds emotions a hindrance. She’d rather engineer them out of people’s minds. She tried to do that to Carina when she was a teen. It worked for a time, but then the programming broke down, resulting in Carina wanting to kill everyone around her. When the book starts, Carina is forced to come out of the Zealscape and return to real life, to partner with a group of ragtag hackers to take down Roz and her employer. Carina is the one who got away, the proof of her failure. Roz will do anything—anything—to take her down.

Basically, Shattered Minds is a Frankenstein retelling, with Roz as the doctor and Carina as the creation. The reader follows Carina through her quest to take down Sudice, and also Roz in her quest to find her. Interspersed throughout the story is a flashback narrative, from Roz’s point of view, about when they worked together three years ago and Roz started to suspect that Carina was a much bigger threat than she ever could have realised.

Roz is my far my favourite villain. I hope you might love/hate her too.

Originally from sunny California, Laura Lam now lives in cloudy Scotland. Lam is the author of BBC Radio 2 Book Club section False Hearts, the companion novel Shattered Minds, as well as the award-winning Micah Grey series Pantomime, Shadowplay, and Masquerade. Her short fiction and essays have also appeared in anthologies such as Nasty Women, Solaris Rising 3, Cranky Ladies of History, and more.  She lectures part-time at Napier University in Edinburgh on the Creative Writing MA.