Sarah Kuhn is joining us today to talk about her novel Heroine Worship. Here’s the publisher’s description:

Once upon a time, Aveda Jupiter (aka Annie Chang) was demon-infested San Francisco’s most beloved superheroine, a beacon of hope and strength and really awesome outfits. But all that changed the day she agreed to share the spotlight with her best friend and former assistant Evie Tanaka—who’s now a badass, fire-wielding superheroine in her own right. They were supposed to be a dynamic duo, but more and more, Aveda finds herself shoved into the sidekick role.

It doesn’t help that Aveda’s finally being forced to deal with the fact that she’s been a less than stellar friend to Evie. Or that Scott Cameron—the man Aveda’s loved for years—is suddenly giving her the cold shoulder. Or that the city is currently demon-free, leaving Aveda without the one thing she craves most: a mission.

All of this is causing Aveda’s burning sense of heroic purpose—the thing that’s guided her all these years—to falter.

In short, Aveda Jupiter is having an identity crisis.

When Evie gets engaged and drafts Aveda as her maid of honor, Aveda sees a chance to reclaim her sense of self and sets out on a mission to make sure Evie has the most epic wedding ever. But when a mysterious, unseen supernatural evil starts attacking brides-to-be, Aveda must summon both her superheroine and best friend mojo to take down the enemy and make sure Evie’s wedding goes off without a hitch—or see both her city and her most important friendship destroyed forever. 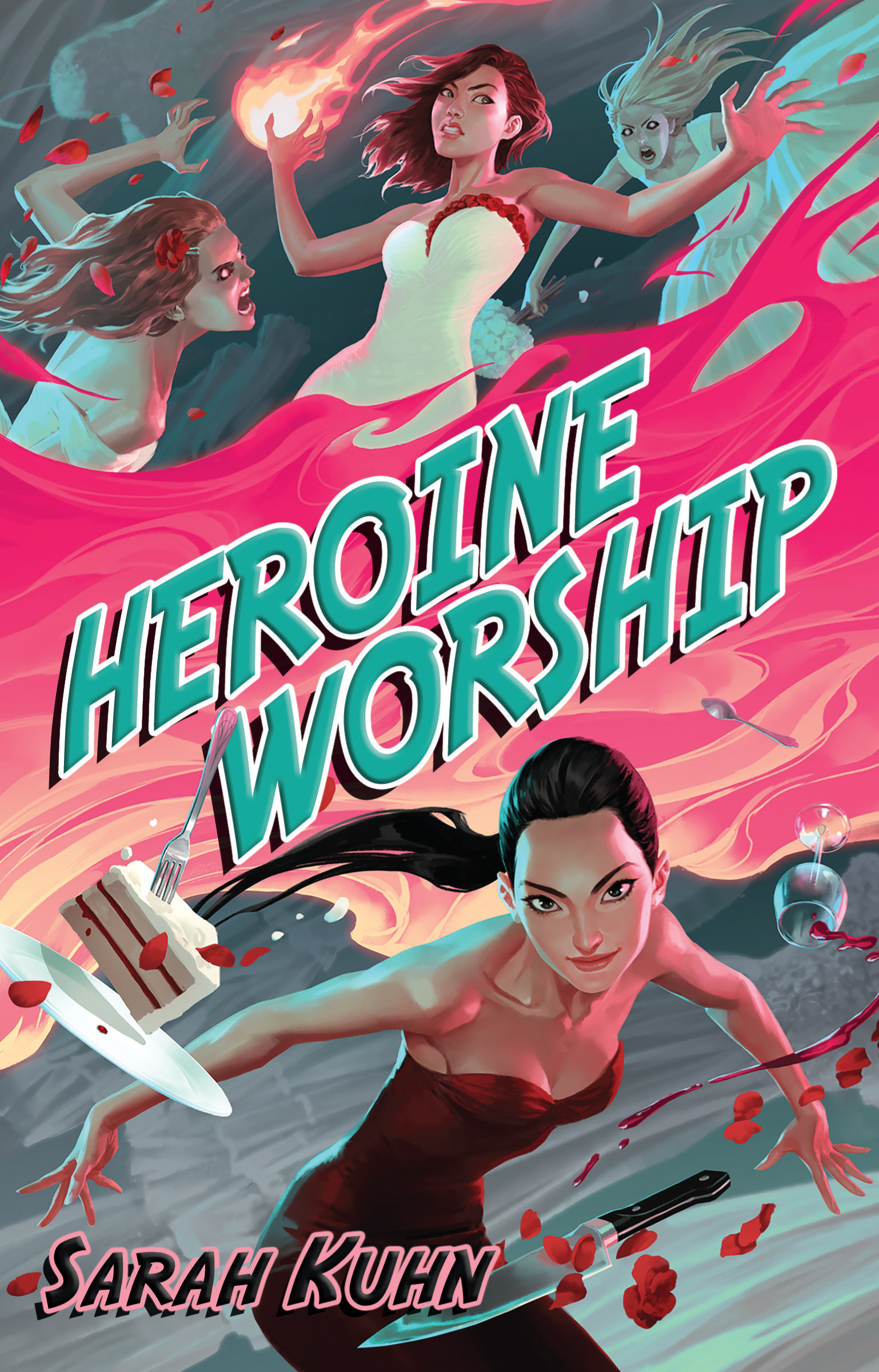 Heroine Worship is the sequel to Heroine Complex, my debut novel starring Asian American superheroines who fight evil, sing bad karaoke, and have ridiculous adventures together. Although the core cast is the same, we switch narrators. Book 1 was all about Evie Tanaka, a put-upon personal assistant and wallflower who needs to embrace her superpowers and step up and become the heroine she’s meant to be. Book 2 focuses on her longtime best friend/former boss Aveda Jupiter, aka Annie Chang, aka San Francisco’s most fabulous superheroine. The Aveda/Annie of Book 1 was a bit of an antagonist to Evie—demanding, drama-seeking, and diva-esque. But in Book 2, Annie must deal with the fallout from her behavior in Book 1, as well as the fact that she and Evie are now co-heroines—and that for the moment, Evie is definitely the star of the show.

But even as Annie grapples with her increasingly frustrating identity crisis, she remains an unstoppable force of nature. Her quest for perfection means she’s always in motion, always doing things. In an early draft of the book, I had her retreating to a more passive role, stymied by the fact that the city she protects is currently demon-free. But a smart beta reader pointed out that Annie would find something to do, as she always does. She would make something for herself to do. And this is how one of my favorite scenes was born.

Because I decided that during this demon-free lull, Aveda/Annie would take a proactive stance by trying to build her and Evie’s superhero personal appearance empire. As she says: “We were like Olympic athletes, and this is what we did between Olympics.” Of course, Evie’s not terribly interested and not all the personal appearances Annie’s asked to do are particularly glamorous—hence the scene where the fabulous Aveda Jupiter ends up appearing at a children’s birthday party.

My public was not as adoring as I’d expected.

They were also much louder, stickier, and a good two decades younger than I’d expected.

“THIS IS BORING!” one of them shrieked, smearing sparkly frosting all over her ruffly pink dress. “SUPERHERO LADY IS BOOOOOOORIIIIING!”

That started up a chant of “BO-RING! BO-RING!” amongst the partygoers. Because, of course.

“Letta,” I hissed, as I surveyed the unruly mob in front of me. “You didn’t tell me this was a children’s birthday party.”

“You didn’t ask.” She gave me a mildly injured look. “The personal appearances form on your website doesn’t have a place for that info. All it asks for is time, date, and if the facility in question has an adequate supply of fire extinguishers on hand.”

“Ugh.” I couldn’t think of anything more eloquent to say. She was right. I’d have to get Bea to fix that.

I studied the mob again. It wasn’t actually that much of a mob. There were only about fifteen of them. Fifteen sugared-up, hyper five-year-olds, who had probably been expecting . . . I don’t know. What did five-year-olds like?

No, I was not. Though I was surprised these kids had apparently never heard of Aveda Jupiter. Maybe they weren’t from San Francisco?

“Elsa is, uh, busy today, sweetie,” the birthday girl’s mother said in the weariest voice ever. “So we got you a real life superhero. Isn’t that cool?” She turned to me, wild- eyed, like, Back me up, here?

Birthday Girl, refusing to be placated, crossed her arms over her chest and shook her head furiously. “I want a cool superhero. I want Evie. Not . . .” She eyed me up and down, disdain leaking from her every pore. “ . . . her friend.”

And of course it gets much, much worse from there. I love that this scene allowed me to explore a stage of Annie’s identity crisis in a fun, funny way. I love that it let me revisit one of my favorite locations from Book 1—the whimsical and formerly demonic cupcake-infested bakery Cake My Day, which readers may remember from Heroine Complex’s opening scene. I love that it showed me, once again, how a great beta reader note can add such nuance and truth to a character. But what I loved the most about writing this bit is the fact that I didn’t know going in exactly how Aveda was going to handle things, how she was going to deal with being totally humiliated and having her confidence and superheroine bravado take such a big hit. As it turns out, she handles it as she handles most things: she presses on, tries to make it work, and flat-out refuses to give up.

Unlike Queen Elsa of Arendelle, she can pretty much never let it go—and even though that sometimes works to her detriment, it’s one of the things that makes me love writing her.

Sarah Kuhn is the author of Heroine Complex—the first in a series of novels starring Asian American superheroines—for DAW Books. Heroine Complex is a Locus bestseller, an RT Reviewers’ Choice Award nominee, and one of the Barnes & Noble Sci-Fi & Fantasy Blog’s Best Books of 2016. The sequel, Heroine Worship, is out now. Sarah also wrote “The Ruby Equation” for the Eisner-nominated comics anthology Fresh Romance and the romantic comedy novella One Con Glory, which earned praise from io9 and USA Today and is in development as a feature film. Current projects include a series of Barbie comics and a comic book continuation of the cult classic movie Clueless. Her writing has appeared in The Toast, The Mary Sue, Uncanny Magazine, AngryAsianMan.com, IGN.com, Back Stage, The Hollywood Reporter, StarTrek.com, and the Hugo-nominated anthology Chicks Dig Comics. You can visit her at heroinecomplex.com or on Twitter: @sarahkuhn.