Laura Lam is joining us today with her novel Shadowplay. Here’s the publisher’s description.

The circus lies behind Micah Grey in dust and ashes.

He and the white clown, Drystan, take refuge with the once-great magician, Jasper Maske. When Maske agrees to teach them his trade, his embittered rival challenges them to a duel which could decide all of their fates. People also hunt both Micah and the person he was before the circus–the runaway daughter of a noble family. And Micah discovers there is magic and power in the world, far beyond the card tricks and illusions he’s perfecting… 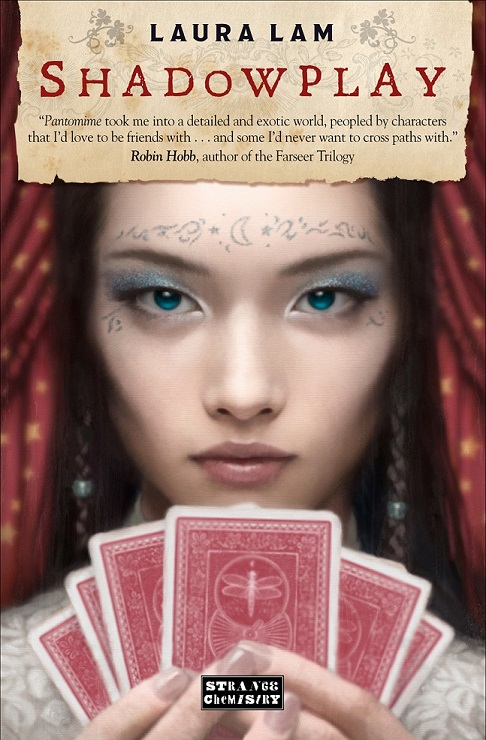 The Micah Grey series is a great excuse to put in many of my pet interests. Pantomime, the first in the series, is set in the circus, and in particular looks at how the people of the circus viewed themselves as different from the rest of society. “We’re playing a trick on the world,” one of the characters told Micah not long after he joined, and then later: “the circus collects outsiders like a flame tempts moths.”

In the sequel, Shadowplay, I focus instead on stage illusion and spiritualism. They’re still separated from society in some ways, but it’s a far smaller cast of characters and there’s not the same sense of an alternate culture. In our world, spiritualism came to prominence in the late Victorian era and had another resurgence after WWI. In my secondary world, there are echoes of the Victorian era, and a similar fascination with death and the departed. The main characters of Shadowplay both use stage magic and illusion and séances to delight the audience, but they are aware that they serve different purposes. With illusion, the audience knows it’s a ruse, but with séances, there may be cynics, believers, or people who desperately want to believe that they can come back in contact with those they miss. Micah and his friends thus act as symbolic reverse psychopomps – guiding the dead back to the living. It was one of the most fascinating angles to explore in this book.

My favourite bit of Shadowplay was a chapter that I didn’t plan. It was one of those rare instances where the words flowed and I had no idea what would happen next, but I loved where it was going. The scene is when the characters practice a séance and receive a vision from the ancient past that contains hints to their future, and here’s the very beginning of it:

“We welcome you to our sacred circle, Jasper Maske,” Cyan intoned. Her face was covered with black gauze, a bride of darkness. She wore a dark Elladan dress, wasp-waisted in a corset. Only her hands were bare, decorated in swirling designs of silver paint, her nails black as night.

“Tonight we call the spirits to peek their heads up from the currents of the River Styx, to whisper the words they wish they could have told us in life. I have known a heartache that few others have possessed. Through this grief, I may pull back the veil and pass along the messages of the dead, Jasper Maske. Close your eyes and imagine who has passed that you wish to speak with. For we have all known, loved, and lost.”

Maske concentrated. Drystan opened his eyes. I squeezed his hand and he squeezed back.

“Someone comes to me through the mists of the otherworld…” Cyan shuddered, her head falling forward on her chest. I felt a humming deep within my chest.

Cyan’s head rose, and my spine turned to ice. Though I could not see her face through the veil, I knew that it was not Cyan.

Laura Lam was raised near San Francisco, California, by two former Haight-Ashbury hippies. Both of them encouraged her to finger-paint to her heart’s desire, colour outside of the lines, and consider the library a second home. This led to an overabundance of daydreams.

She relocated to Scotland to be with her husband, whom she met on the internet when he insulted her taste in books. She almost blocked him but is glad she didn’t. At times she misses the sunshine.

Pantomime was released February 2013 through Strange Chemistry, the YA imprint of Angry Robot Books. The sequel, Shadowplay, will follow in January 2014.