Jon Del Arroz is joining us today to talk about his novel For Steam and Country. Here’s the publisher’s description:

Her father’s been pronounced dead. Destructive earthquakes ravage the countryside. An invading army looms over the horizon. And Zaira’s day is just getting started…

Abandoned at an early age, Zaira von Monocle found life as the daughter of a great adventurer to be filled with hard work and difficulty. She quickly learned to rely on only herself. But when a messenger brought news that her father was dead and that she was the heir to his airship, her world turned upside down.

Zaira soon finds herself trapped in the midst of a war between her home country of Rislandia and the cruel Wyranth Empire, whose soldiers are acting peculiarly—almost inhuman. With the enemy army advancing, her newfound ship’s crew may be the only ones who can save the kingdom. 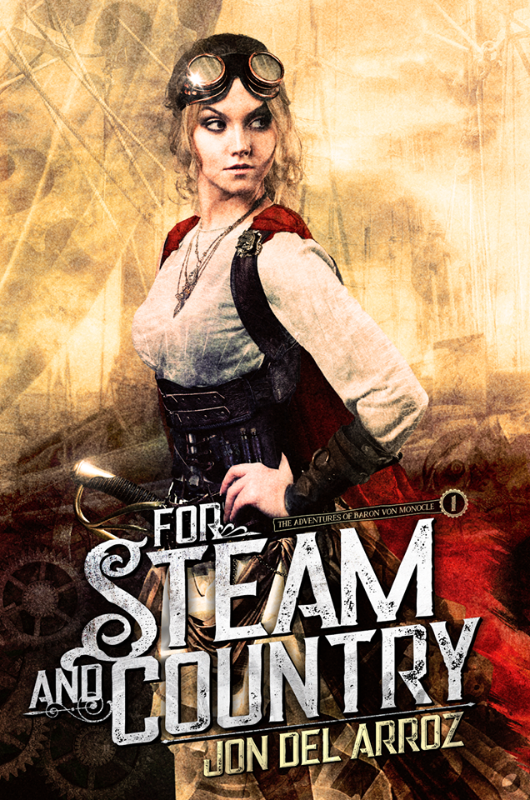 A whimpering squeak came from under the table. I rushed over, pushing aside fragments of plates, baskets, and the remains of a flower arrangement. “Oh, Toby!” I said, holding my breath in hopes he hadn’t been crushed.

My ferret poked his head up from under a fruit basket, staring at me like I was crazy. He held a half-eaten apple between his front paws, but lost his grip on it when he stumbled on the tile floor in excitement. His apple rolled toward my feet. Toby scampered and clawed up my pant leg, moving with fervor around my body. His paws tickled me with each step. When he reached my shoulder, he nudged me lovingly with his nose.

Authors love little furry critters. If you go to almost any author’s feed on social media, you’ll see it littered with puppies and kittens. Animals have inspired such great works in the field like The Cat Who Walked Through Walls by Robert Heinlein, or even the Dragonriders of Pern by Anne McCaffrey – in which the dragons are used as an allegory for horses.

I created the character of Toby because I wanted Zaira to have a furry sidekick who both caused a little chaos and brought her comfort when the going got rough. Toby is a hyperactive little ferret who was given to Zaira as a present from her adventurer father, who was always gallivanting off in some foreign land. Toby serves as a reminder and a connection to her father, and also plays an important plot role later in the book.

We as humans have strange connections to animals, and can sometimes love them more than humans I chose a ferret because I wanted something different from most works, but still presenting a relationship with a domesticated animal. I racked my brain, trying to think of something that would be fun and memorable. I don’t recall how I came across the idea of a ferret, but when I did, I spent a good amount of time on youtube researching ferrets as pets. What I found was some of the most amusing material I’ve ever watched on the internet.

Ferrets are some of the cutest but also craziest animals out there. They’re typically a little smaller than cats, with a look almost like a strange rat. They’re curious animals that squirm and move around constantly, and often work themselves into a frenzy. Ferrets are playful. They jump around and in their playfulness can bite a lot harder than it looks like their little jaws should be able to do. They also are easily spooked, and will run and hide like a pet Chihuahua if they get too worked up.

I didn’t address a couple of points about keeping ferrets of pets in For Steam And Country. With such an action-driven plot, there was little time to explore the day to day life of Zaira with her pet Toby, but I had notes on the characteristics of ferrets all the same. Ferrets have a musky, gamey smell to them which can be very strong. Imported ferrets to the United States have some of their scent glands in their rear removed to mitigate this, but a creature in the wild in a fantasy steampunk era could stink, and would require frequent baths. Beyond that, they’re carnivores, and they have very specific diets that they have to adhere to, otherwise their digestive tract gets clogged and could kill the animal. They also have very limited eyesight, relying on their sense of smell. This final point I tried to elude to in situations with Toby sniffing around to find and discover things.

This being a fantasy world, I did include a mild telepathic bond between Zaira and her pet. Toby could sense when trouble was around, or feel his way through a situation later in the book in order to help bring Zaira her comforts and needs. It’s more of something that’s implied in the book, but in the real world, people and their pets do often form bonds that seem to border on the supernatural. This is part of the charm of having an animal sidekick, making for a compelling addition to a story that adds to Zaira as a character as much as it presents fun for a reader.

If you look at one youtube link for ferrets, I recommend this one: https://www.youtube.com/watch?v=z7HgqXWMpX4. You’ll be stricken with a case of the “awws” within thirty seconds, I guarantee it.

Jon Del Arroz began his writing career in high school, providing book reviews and the occasional article for a local news magazine. From there, he went on to write the weekly web comic, Flying Sparks, which has been hailed by Comic Book Resources as “the kind of stuff that made me fall in love with early Marvel comics.” He has several published short stories, and has worked in gaming providing fiction for AEG’s weird est card game, Doomtown Reloaded, and settings for various RPGs. His debut novel, Star Realms: rescue Run went on to become a top-10 bestselling Amazon space opera. For Steam And Country marks his first foray into fantasy.