Erica L. Satifka is joining us today with her novel Stay Crazy. Here’s the publisher’s description:

After a breakdown in college landed Emmeline Kalberg in a mental hospital, she’s struggling to get her life on track. She’s back in her hometown and everyone knows she’s crazy, but the twelve pills she takes every day keep her anxiety and paranoia in check. So when a voice that calls itself Escodex begins talking to Em from a box of frozen chicken nuggets, she’s sure that it’s real and not another hallucination. Well… pretty sure.

An evil entity is taking over the employees of Savertown USA, sucking out their energy so it can break into Escodex’s dimension. When her coworkers start dying, Em realizes that she may be the only one who can stop things from getting worse. Now she must convince her therapist she’s not having a relapse and keep her boss from firing her. All while getting her coworker Roger to help enact the plans Escodex conveys to her through the RFID chips in the Savertown USA products. It’s enough to make anyone Stay Crazy. 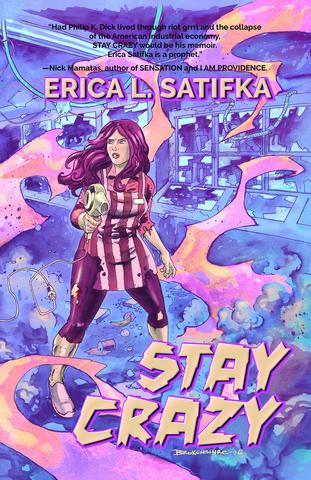 The protagonist of my debut novel Stay Crazy, Emmeline Kalberg, isn’t like most girls. That’s because she’s recently been diagnosed with paranoid schizophrenia, which makes it hard to distinguish fantasy from reality, a situation that becomes even more complex when she’s contacted by an interdimensional being who tells her that our universe is on the verge of annihilation. And she’s not alone.

Roger Cermak, Em’s coworker at the alien-infested Savertown USA, also has schizophrenia. Unlike Em, his psychotic experiences are not recent, and are totally controlled with medication and the passage of time. So when he too is contacted by the being called Escodex, he knows it’s real. Em, however, doesn’t trust him. Why would she? She can’t even trust herself. Here’s what happens during their first extended conversation:

“I’ll have a diet pop. It’s on him.” She narrowed her eyes at Roger in the dimly lit booth. “What do you want to talk about?”

“I want to talk about the voices you’ve been hearing.”

“Don’t play dumb. I saw the burn on your forehead. The same thing happened to me a few weeks ago. First I got a burn, then I started hearing voices.”

She looked out the window at the blocky facade of Savertown USA. “So?”

“You don’t think this whole situation’s a little strange?”

“Lots of weird things happen to me, mister. I’m a crazy person.”

“But this weird thing is actually happening.” Roger sipped at his own Diet Coke. “Listen, I didn’t believe it at first either. I thought I was hallucinating again. But the same thing happened to both of us and that proves it’s real.”

Em rolled her straw between her fingertips. “What do you mean, ‘again’?”

“I used to be schizophrenic. Haven’t had an episode in twenty years. Until now. But I’m not crazy, and neither are you.”

Em looked at Roger. “I think you’re mistaken about that one.”

It was really important to me that Em not be the only neuro-atypical major character in the book. While she didn’t always have schizophrenia (this book has been through countless “imaginings”), once I figured out she did, Roger’s character sprang up almost immediately, fully formed.

Their relationship isn’t easily defined. It’s definitely not romantic, it’s not even really friendship, and Em would rather die than call Roger something as sappy as a mentor. Yet, as they work together, Em sees a glimpse of her possible future. Roger is overweight and balding (two common side effects of antipsychotic medication), and she mocks his appearance out of fear. But Roger is also stable, and smart, and kind. Throughout the course of their uneasy alliance, Em realizes there’s life after her diagnosis. At the beginning of the book, she feels and to a large extent is totally alone: her mom doesn’t get her at all, and try as he might her therapist isn’t really equipped to deal with her. Roger becomes the positive model Em needs, even if she’d never admit it.

Roger is about twenty years older than Em, and developed his disorder in a time when people were even more misinformed about mental illness than they are now, especially one as serious as schizophrenia. And he’s been through a lot of crappy things: homelessness, jail, involuntary commitment. Just as Em sees Roger as a possible future, Roger sees Em as a window into his past, and he’s determined not to let her make some of the same mistakes he’s made, no matter how stubborn she is (and she’s really stubborn).

So often in books that feature a neuro-atypical character, there’s only one of them. I really wanted to do something different, something to show that two mentally ill characters can learn from each other, prop each other up, and most importantly, kick some alien ass.

Erica L. Satifka is a writer and/or friendly artificial construct, forged in a heady mix of iced coffee and sarcasm. She enjoys rainy days, questioning reality, ignoring her to-do list, and adding to her collection of tattoos. Her short fiction has appeared in Clarkesworld,Shimmer, Lightspeed, and Intergalactic Medicine Show, and her debut novel Stay Crazy was released in August 2016 by Apex Publications. Originally from Pittsburgh, she now lives in Portland, Oregon with her spouse Rob and an indeterminate number of cats.