E. Catherine Tobler is joining us today with her novel The Rings of Anubis. Here’s the publisher’s description.

As the nineteenth century turns into the twentieth, the world looks to a future of revolutionary science and extraordinary machines. Archaeologist Eleanor Folley looks back to Egypt’s ancient mysteries and her mother’s inexplicable, haunting disappearance. Agent Virgil Mallory, a man with ghosts and monsters of his own, brings evidence of a crime, taking them both on a thrilling adventure that carries them from Paris to Egypt, and from the present to the ancient past. Uncovering the truth exposes a dangerous game of life, death, and uncanny powers! 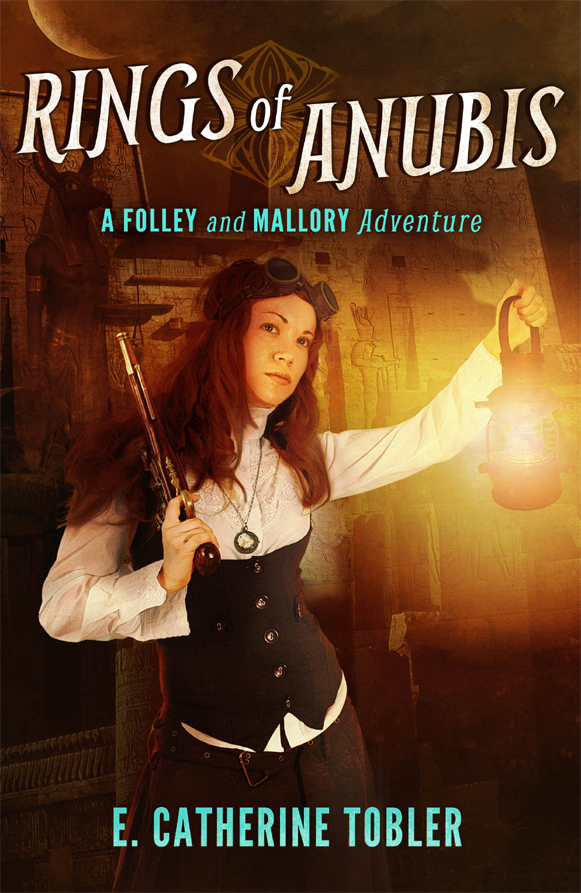 As I write this, there is a great discussion about how game developer Ubisoft couldn’t possibly include playable women in the newest Assassin’s Creed. “It’s double the animations, double the voices, all that stuff and double the visual assets,” said Ubisoft creative director Alex Amancio. “It’s not like we could cut our main character, so the only logical option, the only option we had was to cut the female avatar.” (http://www.theverge.com/2014/6/11/5799386/no-female-characters-in-assassins-creed-unity-too-much-work) “The history of the American Revolution is the history of men,” said Ubisoft’s Creative Director Alex Hutchinson in 2012.

And it seems not much is changing. More and more, it feels like women are being excised from stories, games, and history. We are told on a daily basis that our contributions don’t matter, told that wars are the concerns and history of men, not women. “Let me point out that women never affected the world directly,” Isaac Asimov said in his youth (http://justinelarbalestier.com/books/battle/letters/).

Eleanor Folley would beg to differ.

In Rings of Anubis, I set out to have an active protagonist, whose gender didn’t get in the way of whatever she wanted to do. Eleanor Folley knows quite well that what she likes best (archaeology, exploration, and adventure) has set her at odds with how a staid, 19th-century society believes she should behave. Every day, she tells society to go hang itself.

Eleanor Folley was not a lady–leastwise not a lady polite society would acknowledge as one of its own. She was reminded of this as the cloaked riders came out of the desert and she trained her revolvers on them. Her arms were steady, her stance the same, even if she looked like she belonged in the circus Mallory had mentioned. Wrapped in nightclothes and bed linens, her hair all aflunters, the circus could be the only proper society for her.

The horses were something out of a nightmare for Eleanor, the familiar sound of creatures bound in clockwork. Metal hooves struck the ground with a ceaseless fury. Eleanor concentrated on one target, but noted the rider carried only a spear. She looked at another to see he had but a sling. While the men held their weapons aloft, they made no move to use them.

She eased her fingers off the triggers and pointed her revolvers to the sky, walking slowly backward as the riders closed around them. Mallory did the same, and they now stood with backs braced together. Auberon and Cleo traced a circle around them, keeping the mechanical horses at bay with raised rifles.

In Rings of Anubis, Eleanor sets out to uncover the truth of what happened the day her mother disappeared during an archaeological dig. Along the way, she discovers the life and history of Queen Hatshepsut, one of the most powerful women Egypt has ever known, and dares to believe that her mother may be connected to the queen and the great dark god Anubis.

History is not the realm of men alone. We need to dispel the world of this notion, and that’s why this is my favorite bit of Rings of Anubis.

E. Catherine Tobler’s fiction has appeared in Clarkesworld, Strange Horizons, and Beneath Ceaseless Skies, and her first novel, Rings of Anubis, is now available. Follow her on Twitter @ECthetwit or her website, http://www.ecatherine.com.

1 thought on “My Favorite Bit: E. Catherine Tobler talks about RINGS OF ANUBIS”