David Mack is joining us today with his novel The Midnight Front. Here’s the publisher’s description:

On the eve of World War Two, Nazi sorcerers come gunning for Cade but kill his family instead. His one path of vengeance is to become an apprentice of The Midnight Front―the Allies’ top-secret magickal warfare program―and become a sorcerer himself.

Unsure who will kill him first―his allies, his enemies, or the demons he has to use to wield magick―Cade fights his way through occupied Europe and enemy lines. But he learns too late the true price of revenge will be more terrible than just the loss of his soul―and there’s no task harder than doing good with a power born of ultimate evil. 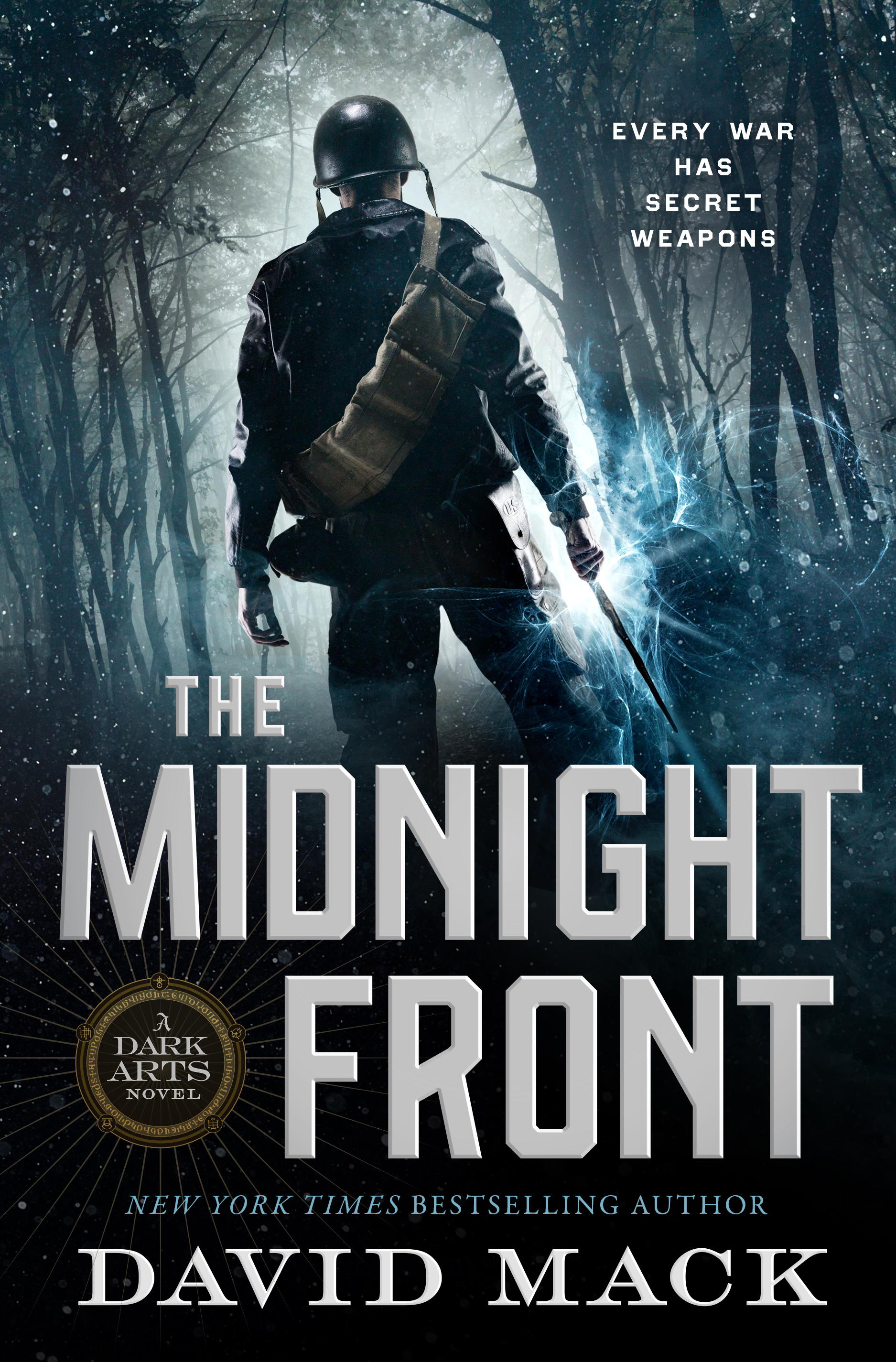 *Note: The following essay includes a depiction of suicide. If you are thinking about suicide, are worried about a loved one, or would like emotional support, talk to someone here.*

It can be easy to forget that even great sagas are constituted of mere moments, and that sometimes the smallest, most personal of scenes can carry a story’s greatest emotional weight.

The Midnight Front is many things at once: it’s a sweeping World War II epic; it’s a dark fantasy that chronicles a bitter secret war between rival groups of sorcerers who wield black magick; but at its heart, it is about a small cadre of magicians who grow to care for one another like family.

Underscoring that theme is the fact that several of my magic-using characters are orphans, have been cast out of their families, or have otherwise found themselves alone in the world. This is true of my main character, Cade, who loses his parents early in the story; my female lead Anja is cast out of her home as a teen and de facto adopted by the Allies’ master magician, Adair. Last but not least, one of Adair’s senior apprentices, Niko, has long since lost his parents, and over the course of the novel he, too, loses what few kin he has left, in a debacle that leads to the death of fellow apprentice Stefan and causes a bitter rift between Niko and Adair.

Such is the state of play when, late in the book, Niko must risk his life to escape a “dead zone” in which magick will not work, so that he can use an enchanted mirror to pass military secrets back to Adair. With their sorcerous archenemy Kein only seconds behind him, Niko crashes his stolen car into a forest and flees. Then:

Drenched in his own blood, Niko propped himself against a tree and pulled his enchanted mirror from a coat pocket with a quaking hand. “Fenestra, Adair.” He was shaken by a hacking cough full of blood while he awaited the master’s reply. Searchlights slashed through the trees as the Germans followed his swath of destruction through the woods.

“No time, Master.” He propped the mirror on his leg, then used his good hand to pull the map and camera from inside his coat. He pushed them one at a time through the mirror to Adair. “Kein . . . built a trap. . . . In a bunker. At Pointe du Hoc.”

“They will cover it with wax and cement. It will be hidden. But destroy it you must.” Tears fell from his eyes. He croaked out his last words. “Bonne chance, Père.”

Niko put the barrel of his pistol into his mouth.

I will not be used against my friends, as Stefan was.

SS troops surrounded him, submachine guns at the ready.

In the name of love, Niko pulled his trigger.

One scene later we pick up that moment from the perspective of his master, Adair:

As the remote image vanished from Adair’s mirror, the master expected to confront his reflection — but like the Fool gazing upon Lear, he saw only his shadow.

He pounded the floor with the sides of his fists. How could I have doubted that lad? Loyal to the end. Braver than I knew.

Adair’s chest heaved with painful sobs for which he had no breath, so his body shook in near silence as he surrendered to his heartbreak.

He called me Father.

I love these related moments. Though Adair and Niko are just supporting characters in the novel, this moment speaks to one of the truths of the narrative. What bonds my heroes through all of their struggles and setbacks is genuine affection.

By comparison, the concerns that drive their foes, the Thule-Gesellschaft (which was a real occult society that helped spawn the Nazi Party) and its leaders (Kein, Briet, and Siegmar) seem to be self-interest, fear, and a desire to see the world burn. If the villains of my story represent a family unit, it is a dysfunctional one at best.

But Adair’s last moment with Niko … it breaks my heart every time I read it. Niko still feels guilty for having set in motion the events that killed Stefan, who he loved like a brother. Just as poignantly, up until the moment of Niko’s sacrifice, Adair still carries anger and resentment toward Niko over that error.

But when Niko refers to Adair as Père — that heartfelt moment, that simple choice of words, expresses a lifetime of love and respect. And then it’s followed by a devastating act of self-sacrifice.

Without those words, it would still have stung Adair to see Niko die. But after that valediction, the moment becomes more profound: for the second time, Adair loses a man who is like a son to him.

It is a tragedy in a novel replete with loss, death, and destruction. But in its sorrow there is also hope: the belief that love will win the day. Even as Niko faces his own end, he urges his surrogate father to look toward the light. He believes in him.

Perhaps it’s a romantic delusion to think that love and hope alone are enough to win a war — but without them, there’s really nothing left worth winning.

1 thought on “My Favorite Bit: David Mack talks about THE MIDNIGHT FRONT”