David B. Coe is joining us today with his novel Spell Blind. Here’s the publisher’s description.

Justis Fearsson is a private investigator on the trail of a serial killer in Phoenix, Arizona.  Justis is also aweremyste—a person with a wizard’s gifts and the ability to see into the paranormal world. Unfortunately, weremystes also tend to go crazy on the full moon—which is why Justis is no longer a cop.  Hard to explain those absences as anything but mental breakdown. But now an old case from his police detective days has come back to haunt him, literally, as a serial killer known as the Blind Angel strikes again. His signature stroke: burning out the victims’ eyes with magic.  Now the victims are piling up, including the daughter of a senator, and Justis must race to stop the Blind Angel before he, she, or it kills again. There’s only one clue he’s got to go on: the Blind Angel is using the most powerful magic Justis has ever encountered, and if he doesn’t watch his own magical step, he may end up just as dead as the other vics. 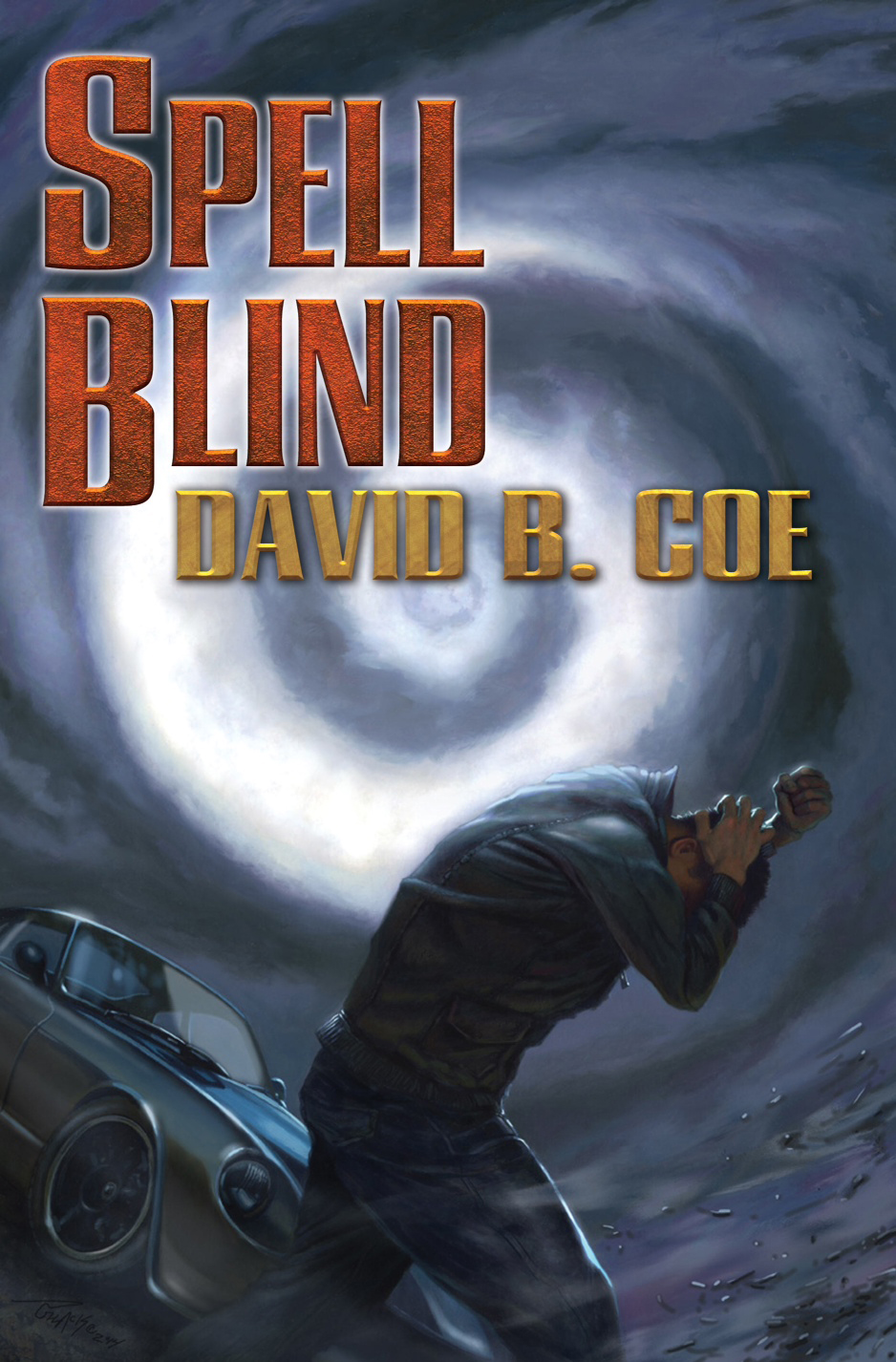 Mary has been kind enough to host me on “My Favorite Bit” several times before, so that I might promote the books of the Thieftaker Chronicles, a historical urban fantasy series that I write as D.B. Jackson. The book I’m writing about today is quite different, and so is this “Favorite Bit.”

Spell Blind, the first book in a new contemporary urban fantasy, the Case Files of Justis Fearsson, which I am publishing as David B. Coe, comes out today from Baen Books. My lead character, Justis “Jay” Fearsson, is a private detective and a weremyste. What is a weremyste? A fine question. Imagine a blend of Jekyll and Hyde and the wolfman. As the moon waxes full, weremystes lose control of their minds. At the same time, the strength of their magic deepens, so that when they most need to control the powers they wield, they are least able to do so. Over time, these moon phasings exact a permanent toll on the sanity of runemystes. Eventually all of them wind up mad.

In this first novel, Jay investigates a series of murders which (shockingly!) involve dark magic, and the approach of the full moon serves as the proverbial “ticking clock” that drives the narrative and pacing. I love the magic system for this series. I love the plotting and my characters. I could write a Favorite Bit piece about several elements of the novel.

But the truth is, my favorite thing about this book is its history, and the very fact that it is finally being published.

I first wrote a novel about Justis Fearsson in 2005 and I sold it to a small press that soon went out of business. We managed to get the rights back and tried to sell the series to another publisher. But the books didn’t re-sell, and it soon became clear to me that the reason the series wasn’t selling, and perhaps (thinking symptomatically) the reason this publisher went under, was that my book wasn’t very good. But I still loved the characters, and I wasn’t ready to give up on the series.

So I went back to the beginning. I reimagined the entire series, coming up with a new magic system, several new characters and character dynamics, and new plots for all the books. I tore apart the first book and rebuilt it piece by piece. And when that still didn’t yield the results I wanted, I tore it apart and rebuilt it a second time and a third.

Why put myself through all of this? Because, as I said, I loved the characters, my point of view character in particular. I loved his interactions with the core characters surrounding him. And I was determined to make the series into something commercially and critically viable that also preserved those elements of the original idea that first drew me to the story. It took a tremendous amount of work and time. My rewrites of this first book spanned a total of about six years, and by the time I was done the book was different in just about every way from that first incarnation. It even had a different (better) title. I received a ton of rejections along the way, but I also received invaluable critical feedback from my agent, from editors, and from friends who read the manuscript in various incarnations.

I should also make clear that I did other work besides this. While working on the Fearsson rewrites I also wrote and published the Blood of the Southlands trilogy and the first two novels of my Thieftaker Chronicles. But always Jay Fearsson remained in the back of my mind, waiting his turn. Late in the summer of 2013, we finally resold the series in its current form to Baen. And Baen wasn’t the only publisher interested in the books.

Many might wonder why this would be my favorite thing about the book. It was at times a painful and discouraging process, and I was delighted to see my struggles with the series finally end with last year’s sale. But I believe the tale of this series says a lot about what it takes to be a professional writer.

This is not an easy profession, and our careers don’t always progress in a linear fashion, with ever greater success awaiting our next release. My struggles with this book and series came after I had published eight novels. I was an established, award-winning author with a history of critical success and commercial viability. And that really didn’t matter at all.

Not all books need to be rewritten as many times as this one did. We don’t always need to respond to rejection with a complete reimagining of the project in question. But by the same token, writers do need to understand that rejection is not a final judgment; it is one step in a creative negotiation. Revision is as much a part of the writing process as that original composition of the manuscript. We have to be open to editorial criticism, and yet there is also something to be said for stubbornly clinging to our faith in a project, even in the face of the kind of difficulties I encountered.

To me, Spell Blind is more than just a new release. It represents both determination and flexibility, my passion for a creative notion and the realization that sometimes we as artists need to grow into our creative ambitions. In other words, the book embodies for me both the challenges and rewards of being a professional writer. And that is why the tortured history of the book itself is My Favorite Bit.

David B. Coe is the award-winning author of more than fifteen fantasy novels. His newest series, a contemporary urban fantasy called The Case Files of Justis Fearsson, debuts with the January 2015 release from Baen Books of Spell Blind. The second book, His Father’s Eyes, will be out in the summer of 2015. Writing as D.B. Jackson, he is the author of the Thieftaker Chronicles, a historical urban fantasy from Tor Books that includes Thieftaker, Thieves’ Quarry, A Plunder of Souls, and Dead Man’s Reach (also coming in the summer of 2015). He lives on the Cumberland Plateau with his wife and two teenaged daughters. They’re all smarter and prettier than he is, but they keep him around because he makes a mean vegetarian fajita. When he’s not writing he likes to hike, play guitar, and stalk the perfect image with his camera.

2 thoughts on “My Favorite Bit: David B. Coe talks about SPELL BLIND”