Dan Koboldt is joining us today with his novel The Island Deception. Here’s the publisher’s description:

For stage magician Quinn Bradley, he thought his time in Alissia was over. He’d done his job for the mysterious company CASE Global Enterprises, and now his name is finally on the marquee of one of the biggest Vegas casinos. And yet, for all the accolades, he definitely feels something is missing. He can create the most amazing illusions on Earth, but he’s also tasted true power. Real magic.

Luckily–or not–CASE Global is not done with him, and they want him to go back. The first time, he was tasked with finding a missing researcher. Now, though, he has another task: Help take Richard Holt down.

It’s impossible to be in Vegas and not be a gambler. And while Quinn might not like his odds–a wyvern nearly ate him the last time he was in Alissia–if he plays his cards right, he might be able to aid his friends.

He also might learn how to use real magic himself.

Continuing the exciting adventures from The Rogue Retrieval, The Island Deception blends fun and mystery into a brilliant new fantasy from Dan Koboldt. 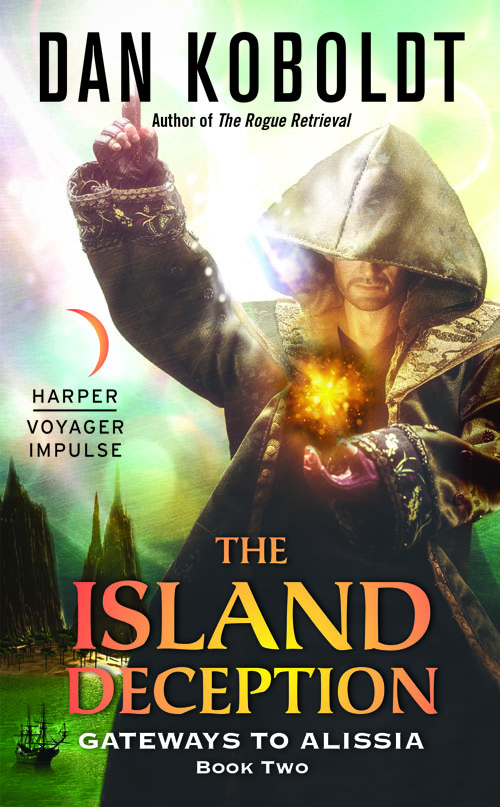 Quinn Bradley, the protagonist of my series, is a stage magician from Las Vegas who’s hired to infiltrate a secret medieval world. He has access to holograms, electronics, and other modern technologies that the other world hasn’t seen before. Even so, my favorite bit in THE ISLAND DECEPTION is Quinn’s ability to use simple sleight of hand.

In the real world, our world, stage magic is among the oldest performing arts on record. One of the earliest books on the subject, Gantziony’s Natural and Unnatural Magic, was published in 1489. Stage magicians were a common form of public entertainment before the 18th century. Quick-fingered deception, in other words, is hardly a novel concept.

My protagonist just happens to be really good at it.

Is there any natural ability involved? Probably. The inherently dextrous tend to be drawn to performance magic, just as the inherently clumsy tend to avoid glassblowing. Yet what sets Quinn apart — what sets most successful illusionists apart — is a willingness to put in the work. He masters tricks with cards, coins, ropes, and other everyday objects. He practices every trick for countless hours, until he can execute it perfectly every time. Even better, he’s already gone through the training montage when the story starts.

A medieval world offers many opportunities to use such skills. Quinn is not the kind of person to pass them up, either. Sometimes he uses illusions to get out of a jam, or to obtain something the mission requires. Other times, he does it simply because he can. Here’s an example from The Island Deception:

The pocket on his jacket yawned open to reveal one of the fat Alissian gold coins the lab had minted for this mission.
Quinn plucked it out between two fingers, light-touch, and palmed it. “Can’t you help me out? I’ll make it worth your while.” He grinned and held up the coin.
Mendez frowned. “Where’d you get that? I just had one of those.”
“I know.” Quinn flipped it to him so that it spun in the air with that high-pitched metallic ring. I never get tired of that sound.
Mendez caught it one-handed. But when he opened his hand, it was a crude penny. “Hey!”
Quinn still had the gold coin, and now he danced it across all ten fingers. “I can do this all day.”

Sharp wits and quick fingers are certainly advantageous when posing as a magician in a medieval world. But they also have the tendency to get Quinn into trouble, because he just can’t help himself. In the first book, his inclination to show off came with a price: the world has real magicians of its own, and the penalty for impersonating one is death.

Then again, the existence of true magic is what motivates Quinn to return to Alissia in The Island Deception. He’s tasted real magic, and now he misses it. More than that, he can’t help but wonder if it would be possible to bring some of that power back into our world. Real magic would certainly put him “one ahead” (as magicians say), and that’s exactly where Quinn Bradley wants to be.

Dan Koboldt is a genetics researcher and fantasy/science fiction author. He has co-authored more than 70 publications in Nature, Science, The New England Journal of Medicine, and other scientific journals. Dan is also an avid deer hunter and outdoorsman. He lives with his wife and children in Ohio, where the deer take their revenge by eating the flowers in his backyard.