Curtis C. Chen is joining us today with his novel Waypoint Kangaroo. Here’s the publisher’s description:

Kangaroo isn’t your typical spy. Sure, he has extensive agency training, access to bleeding-edge technology, and a ready supply of clever (to him) quips and retorts. But what sets him apart is “the pocket.” It’s a portal that opens into an empty, seemingly infinite, parallel universe, and Kangaroo is the only person in the world who can use it. But he’s pretty sure the agency only keeps him around to exploit his superpower.

After he bungles yet another mission, Kangaroo gets sent away on a mandatory “vacation:” an interplanetary cruise to Mars. While he tries to make the most of his exile, two passengers are found dead, and Kangaroo has to risk blowing his cover. It turns out he isn’t the only spy on the ship–and he’s just starting to unravel a massive conspiracy which threatens the entire Solar System.

Now, Kangaroo has to stop a disaster which would shatter the delicate peace that’s existed between Earth and Mars ever since the brutal Martian Independence War. A new interplanetary conflict would be devastating for both sides. Millions of lives are at stake.

Weren’t vacations supposed to be relaxing?

With Waypoint Kangaroo, Chen makes his debut with this outer space thriller. Chen has an extensive network of connections to prominent science fiction authors, and has studied under John Scalzi, James Patrick Kelly, and Ursula K. LeGuin. 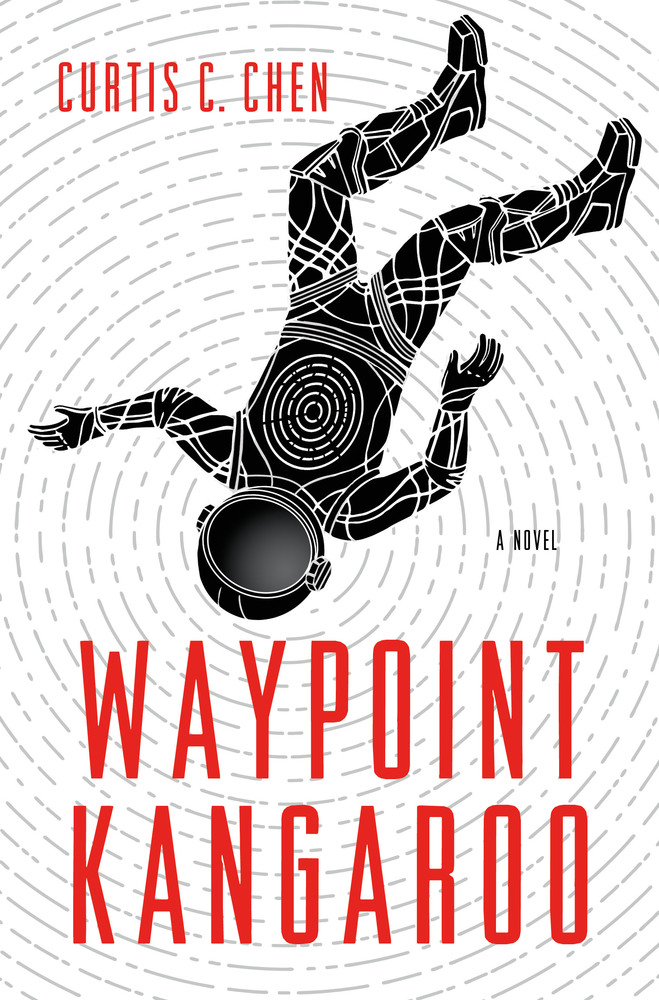 My favorite bit in Waypoint Kangaroo is a dumb joke. (I know what you’re thinking: “Which one? There are so many dumb jokes in your novel!” Thanks, Mom.)

Dumb jokes and bad puns are especially apt for my protagonist, KANGAROO. That’s his spy agency code name, because he has a superpower: the ability to open portals into a pocket universe that only he can access. The pocket allows Kangaroo to smuggle pretty much anything anywhere, and it makes him both special and useful, but he’s otherwise not terribly well suited to be a secret agent. I had fun playing with that dichotomy.

Kangaroo is an American, and at some point I decided that English would be the only language he was fluent in, because it went against the fiction trope of a hyper-competent super-spy–see if you can spot other James Bond 007 references in the book!–and that setup also gave me the opportunity to reproduce a bit that my wife and I improv every so often:

(Basically imagine Abbott and Costello doing “Who’s on First?” Sort of. And I’m Lou, just to be clear.)

This comedy gold is possible because Mandarin is a tone language, and non-native speakers often have difficulty distinguishing the tones that affect the meaning of spoken words. It’s like music: you can train yourself to hear different pitches and tell when a note is “sharp” or “flat,” but it doesn’t come naturally to most people.

In Waypoint Kangaroo, our hero gets tripped up when reading a stranger’s name tag. My publisher is producing an audiobook edition of the novel, and I included these notes for the narrator:

And here’s the bit in question:

Trust me, this would kill in Taiwan.

My obsessive stage direction for what is an inconsequential throwaway joke is just one symptom of a long-running fascination with the craft of writing for performance–especially television–but that, as they say, is another story. I hope my dumb jokes will not interfere with anyone’s enjoyment of Waypoint Kangaroo. Especially you, Mom.

Curtis’ short stories have appeared in Daily Science Fiction, the Baen anthology MISSION: TOMORROW, and THE 2016 YOUNG EXPLORER’S ADVENTURE GUIDE. He is a graduate of the Clarion West and Viable Paradise writers’ workshops.

You can find Curtis at Puzzled Pint Portland on the second Tuesday of most months. Visit him online at: http://curtiscchen.com