Cheryl Low is joining us today with her novel Vanity in Dust. Here’s the publisher’s description:

In the Realm there are whispers. Whispers that the city used to be a different place. That before the Queen ruled there was a sky beyond the clouds and a world beyond their streets. Vaun Dray Fen never knew that world. Born a prince without a purpose in a Realm ruled by lavish indulgence, unrelenting greed, and vicious hierarchy, he never knew a time before the Queen’s dust drugged the city. Everything is poisoned to distract and dull the senses, even the tea and pastries. And yet, after more than a century, his own magic is beginning to wake. The beautiful veneer of the Realm is cracking. Those who would defy the Queen turn their eyes to Vaun, and the dust saturating the Realm. From the carnivorous pixies in the shadows to the wolves in the streets, Vaun thought he knew all the dangers of his city. But when whispers of treason bring down the fury of the Queen, he’ll have to race to save the lives and souls of those he loves. 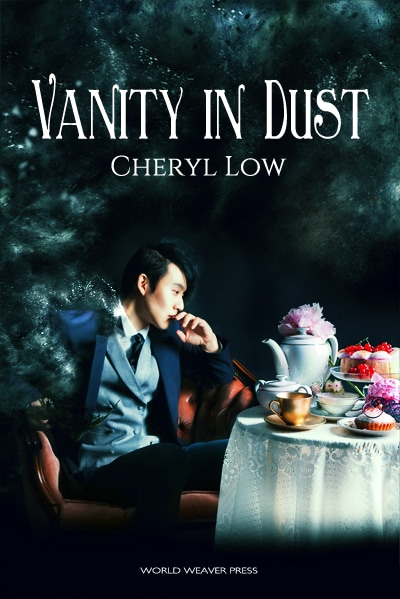 Vanity in Dust is a product of obsessive creation. It’s a world I built at first for my own imagination to play in, later spiraling into the Crowns and Ash series. I love this world. It’s a magical city set apart from everything else with the Queen’s tower at its heart, surrounded by an upper-class of lavish comfort and excess and unaging beauty, spreading out into the less fabulous buildings of the Main and then from there into the lower ends of the city, abandoned and forgotten. Beyond that there is only a graveyard of ash, reaching outward and rising up into the barren edges of the world they know.

The sky is forever filled with clouds and most of the citizens have long since forgotten the existence of stars or the color of the sky. Their magic has become a product, refined and sold back to them by the Queen, and so long as they buy and consume it without questions—she allows them to go on in this endless cycle of parties and empty scandals. Of course, that can’t go on forever.

The city thrives on its drug of choice, dust. I love dust! In the shadows of the city live pixies, beautiful but vicious little creatures that will gladly lick the residue of magic from the bricks of the streets or gnaw it from the flesh of citizens. Factories out in the ash lure in pixies with rooms full of magic, letting the little beasts eat and eat until they’re so fat that their frail wings can no longer lift them from the ground. And then they’re strung up on lines and roasted into tiny, magic rich, statues of their former selves—later ground down into the dust that saturates everything from tea to pastries to cigarettes in the upper end of the city.

They make an appearance in the first scene of the book, always present at the edges of darkness.

The scratching, fluttering sound of wings smacking against brick drew his gaze to the corner of the rooftop. One of the lamps had gone out, something that never happened above the Low, and the shadow there swelled with pixies.

Ferrin shuffled two steps closer and peered into the moving darkness. The nasty insects shifted about wildly, bumping into the wall and each other, grappling for space closer to him at the edge of the shadow. They stared back with nearly human eyes to match their nearly human, though miniature, bodies. In his dusted state, Ferrin was tempted to reach out to them, but then one smiled. Thin lips parted to expose rows of needle teeth and he twisted back. Sobering even just a fraction was enough to have him returning to the party inside, closing the door sharply behind him and drowning in the volume of the warehouse once more.

I love scary-cute things! And the pixies are just that. Pretty but terrible and always eager to get a bite out of anyone that steps into the shadows. I’m not even sure how I first came up with the dust, if it was the pixies first or the other way around, but it became this driving force of the world. True addicts are called dusters, often found rumpled in teahouses in a dust stupor, watching smoke gather against the ceilings. Even the main character, Vaun, is prone to over indulge and loses time to blackouts.

Dust saturates the Realm and the story and, I promise, the pixies make more appearances than just the opening scene.

Cheryl Low was born and raised in California only to later chase her romantic lead around the globe to the north of Sweden. When not writing, reading, at the gym, or on adventure, she is likely to be found eating candy and watching horror flicks. She loves sugar in almost all its magnificent forms, craft projects though she does not follow directions, baking without adhering to recipes, notebooks of all sorts, and comfy chairs.