Cassandra Rose Clarke is joining us today with her novel The Wizard’s Promise. Here’s the publisher’s description.

Hanna has spent her life hearing about the adventures of her namesake Ananna, the lady pirate, and assassin Naji. She dreams of the same adventures, but little does she know she is about to tumble into one of her own. Hanna is apprenticed to a taciturn fisherman called Kolur, and, during a day of storms and darkness, are swept wildly off course.

In this strange new land, Kolur hires a stranger to join the crew and, rather than heading home, sets a course for the dangerous island of Jadanvar. As Hanna meets a secretive merboy, and learns that Kolur has a deadly past, she soon realises that wishing for adventures is a dangerous game – because those wishes might come true. 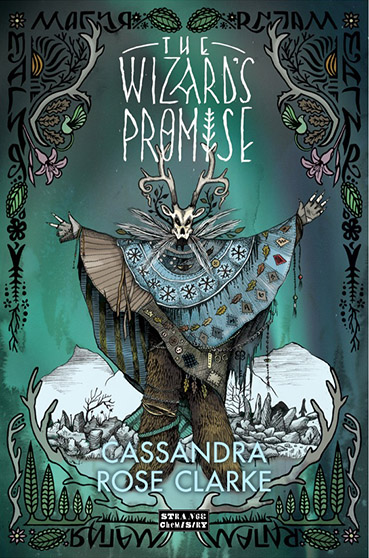 My favorite bit in The Wizard’s Promise falls pretty much smack dab in the middle of the book and is a bit of a spoiler—but it says so much about the story, and about the main character, Hanna that I just had to choose it, spoiler or not!

The Wizard’s Promise is a sort-of sequel to my last YA duology, which started with The Assassin’s Curse. I say sort-of sequel because while it doesn’t continue the story, it does take place in the same world, and Hanna is actually named after the main character in The Assassin’s Curse, Ananna. Hanna spends a lot of her time in the book trying to live up to her namesake—which is no small feat, given that Ananna is a female pirate captain, and Hanna is a young girl living in a fishing village.

In the first part of the book, Hanna wants capital-A adventure, just the sort that Ananna is always getting up to. Instead, she has to go on a three-day fishing trip with her apprentice master, Kolur. Run of the mill. Ordinary.

The thing is, Hanna does wind up getting her adventure. I don’t want to summarize the first part of the book for you, but suffice to say thst three-day fishing trip doesn’t go as planned, and Hanna learns that her apprentice master may not be everything he’s lead her to believe.

And that brings me to my favorite bit.

Halfway through the story, Hanna strikes out on her own, and it’s not because she wants to go chasing after adventure, either. It’s actually because she realizes that adventure isn’t everything it’s cracked up to be. More than that, though, when she learns that Kolur has been lying to her, she realizes that she’s better off finding her own way:

“We were almost killed by the Mists,” I said, quietly and evenly. “A man, an innocent man, was killed for trying to warn us. We risked our lives on the magic.”

Kolur was making every effort not to look at me.

“All so you could win back some queen!” The words erupted. “A woman you abandoned. You had your chance, Kolur! And now you’re bringing the Mists down on me and on Frida and on everyone—just because she’s marrying someone who isn’t you?”

I love this moment because it’s the first time Hanna really gets to live up to Ananna’s name—and she’s not even thinking about it! Being Ananna is the furthest thing from her mind at this point, which is why it’s so great to me. She’s transforming and building up her strength without even realizing it, and she’s actually doing it on her own terms, not so she can be a copy of someone else.

I also had a lot of fun writing that moment because it’s exactly the sort of thing I always wished I was brave enough to do back when I was a teenager. Hanna in a lot of ways is like a younger version of me—she’s a daydreamer, she wants out of her small town—but I would have been too scared to talk back to an adult like that, and definitely too scared to run off on my own. So it was a lot of fun setting Hanna out on her first real adventure.

Cassandra Rose Clarke grew up in south Texas and currently lives in a suburb of Houston, where she writes and teaches composition at a local college. She holds an M.A. in creative writing from The University of Texas at Austin, and in 2010 she attended the Clarion West Writer’s Workshop in Seattle. Her work has been nominated for the Philip K. Dick Award and YALSA’s Best Fiction for Young Adults. Her latest novel is the YA adventure fantasy The Wizard’s Promise, out now from Strange Chemistry.