Becky Allen is joining us today to talk about her novel Bound by Blood and Sand. Here’s the publisher’s description:

Jae is a slave in a dying desert world.

Once verdant with water from a magical Well, the land is drying up, and no one remembers the magic needed to keep the water flowing. If a new source isn’t found soon, the people will perish. Jae doesn’t mind, in a way. By law, she is bound by a curse to obey every order given her, no matter how vile. At least in death, she’ll be free.

Elan’s family rules the fading realm. He comes to the estate where Jae works, searching for the hidden magic needed to replenish the Well, but it’s Jae who finds it, and she who must wield it. Desperate to save his realm, Elan begs her to use it to locate the Well.

But why would a slave—abused, beaten, and treated as less than human—want to save the system that shackles her? Jae would rather see the world burn.

Though revenge clouds her vision, she agrees to help if the realm’s slaves are freed. Then Elan’s father arrives. The ruler’s cruelty knows no limits. He is determined that the class system will not change—and that Jae will remain a slave forever. 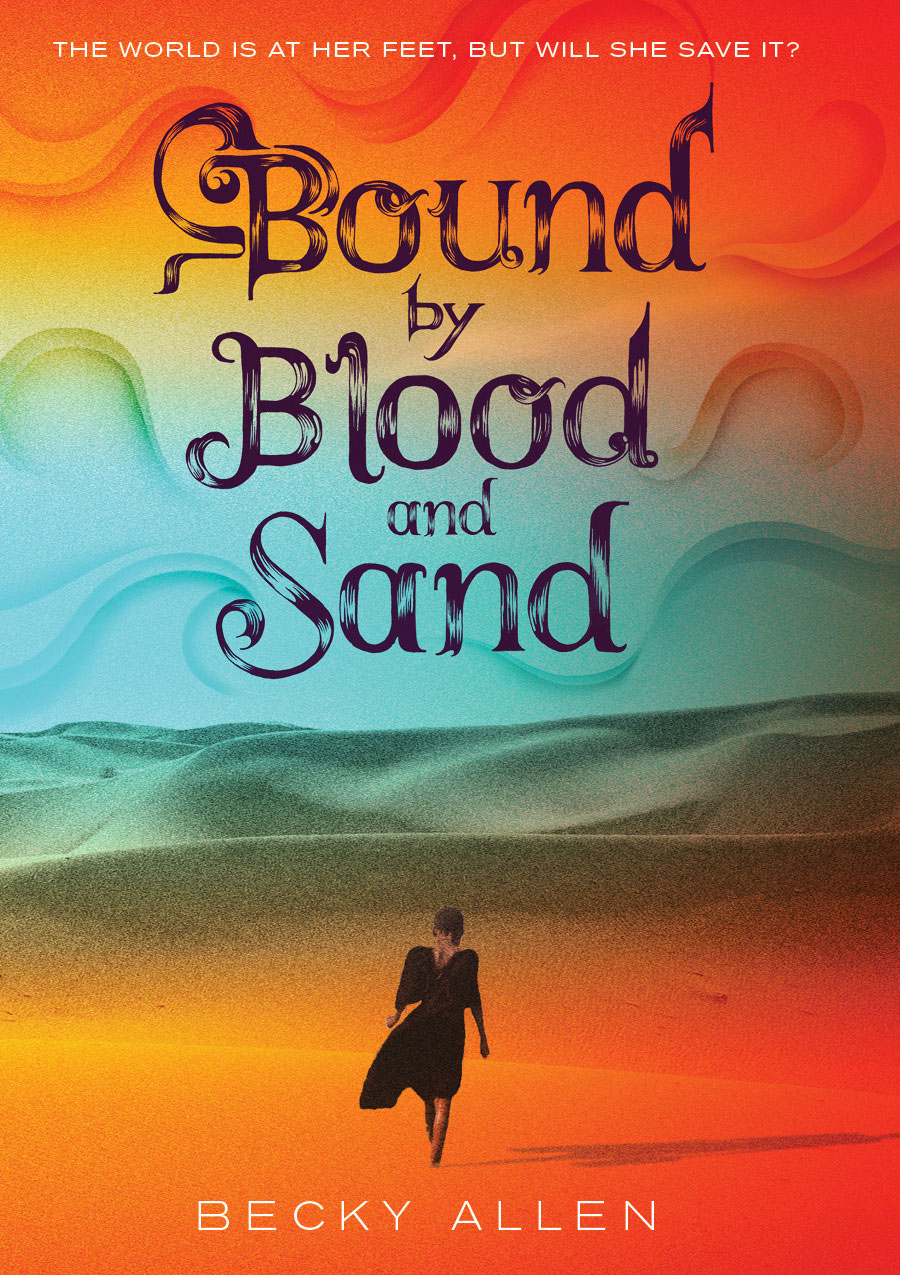 If you were to meet me in person, maybe to chat over a cup of coffee or something, and then pick a word to describe me — other than “short” — I could make some guesses about what that word would be. Probably cheerful or friendly, or perhaps optimistic. If I were a TV trope, I’d be the plucky girl.

So if you were to meet me for a cup of coffee, and find out that I write YA fantasy, and then pick up my book, you miiiiight be a little surprised. Because Bound by Blood and Sand isn’t friendly or cheerful. My protagonist, Jae, is definitely not plucky. In fact, she’s really, really angry — and that’s my favorite bit.

But she wasn’t always that way.

I wrote Bound by Blood and Sand from the ground up three times. It came from two vague ideas, initially very poorly stitched together: one was about a desert world that needed magic to keep its water from drying up, and the other was about a curse that magically compelled a whole class of people to follow any order they were given. The first version was really just trying to figure out how those two ideas could be tied together. I knew it was awful and needed a full rewrite. But the with second version, I thought I had something. I just knew something was still missing.

The thing about that second version is that it was actually mostly okay. The stakes weren’t personal enough — lots of saving the world, not a ton of emotional resonance. And I got some feedback that it was confusing and people didn’t really understand the way the curse worked, because it didn’t actually have much of an impact on the characters. Sure, it was something that Jae, the protagonist, needed to work around — but it was pretty much just an obstacle, an annoyance she wanted to be rid of. That version of Jae was actually a lot more like me, plucky and deeply pragmatic. The world needed to be saved, so she saved it.

There was a scene in the middle where a guy who’d harassed Jae was badly injured, and she used her newfound magic to heal him. It was emblematic of who Jae was, in that draft, and it felt right to me. Probably because I’d like to think I’m the sort of person who’d use my newfound powers for good, so having a character do the same felt correct.

Then, when I was discussing how something wasn’t quite gelling with one of my critique partners, she called that scene out and asked, “What if instead of healing that guy, Jae kills him? What if instead of doing the right thing, she just wants revenge?”

My first instinct was a big ol’ no, because that wasn’t what the character would do. It wasn’t really that kind of book. There was an adventure and a love story and a mostly-happy ending. The characters all pretty much liked each other and got along, except for the villain, who had no particular motivation. But the idea was intriguing.

I sat down and really thought about it. If Jae was going to be out for blood, she needed a reason, and suddenly it was obvious where I’d gone wrong. The curse I’d laid out had always had some consequences, but I hadn’t wanted to delve into it too deeply, because I knew that the implications of anyone being as literally powerless as the cursed characters would be really dark. The kind of dark that I really wasn’t comfortable with.

We see the consequences of unbalanced power structures all the time in real life. Violence is committed towards marginalized people with terrifying frequency — and too often, it’s ignored or worse.  Victims are made responsible for the crimes committed against them. Women are told they shouldn’t drink at parties or walk home alone. Black people are told they shouldn’t wear hoodies. And the end of every terrible news story seems to be a criminal getting a slap on the wrist, or getting off scot-free, because of who holds power and who doesn’t.

If I was going to write about systematic powerlessness, I had to write about its consequences. And I had to make it personal for Jae. I stopped pulling punches and let some truly awful things happen around her, and to her, because she didn’t have the power to fight back and no one who had power noticed or cared. I wrote her desert world as brutal, and the way the people in power behaved was just as brutal. Which meant Jae herself became a character who was a survivor of abuse, of starvation and dehydration, and of rape.

So when Jae acquired her magic abilities, she no longer looked around for the quickest way to save the world. Instead, she saw a world that wasn’t worth saving, and a system she’d rather die than take part in. And when she’s assaulted again, partway through the book, but this time has access to power she’s never felt before, she has no interest in mercy or forgiveness.

Writing about sexual assault made me deeply uncomfortable. I hesitated to do it, because, frankly, it’s not something I like reading about, and because it’s so common in fantasy novels — and too often only used to up the drama or demonstrate how evil a villain is. But in the end I decided that if I was going to write about a system that would leave everyone within it vulnerable to abuse, it would undermine the whole story to pretend rape and assault just didn’t happen. And if I was going to include it, I wanted it to be important. Jae’s trauma and her rage are both part of her character from the first page, and she never apologizes for them.

And that’s why Jae’s anger is my favorite bit. I’d never written a character like Jae before, one whose world view was so different from mine. But centering the book around her anger brought the whole story into focus and it forced me to look not just at the darkness in the book I wrote, but in the world around me, too. And that’s the part that made it so powerful for me. Like I said at the beginning, I’m generally a cheerful, optimistic person. But that doesn’t mean I can’t be angry, too.

Becky Allen grew up in a tiny town outside Ithaca, New York, and graduated from Brandeis University with a major in American studies and a minor in journalism. She is the website director of TheBody.com, an online HIV resource, and loves New York, brunch, and feminism. Becky lives in New York City.