Andrew Neil Gray and J.S. Herbison are joining us today to talk about their novella The Ghost Line. Here’s the publisher’s description:

The Ghost Line is a haunting science fiction story about the Titanic of the stars by debut authors Andrew Neil Gray and J. S. Herbison that Lawrence M. Schoen calls “a delicious rush of the future and the past.”

The Martian Queen was the Titanic of the stars before it was decommissioned, set to drift back and forth between Earth and Mars on the off-chance that reclaiming it ever became profitable for the owners. For Saga and her husband Michel the cruise ship represents a massive payday. Hacking and stealing the ship could earn them enough to settle down, have children, and pay for the treatments to save Saga’s mother’s life.

But the Martian Queen is much more than their employer has told them. In the twenty years since it was abandoned, something strange and dangerous has come to reside in the decadent vessel. Saga feels herself being drawn into a spider’s web, and must navigate the traps and lures of an awakening intelligence if she wants to go home again. 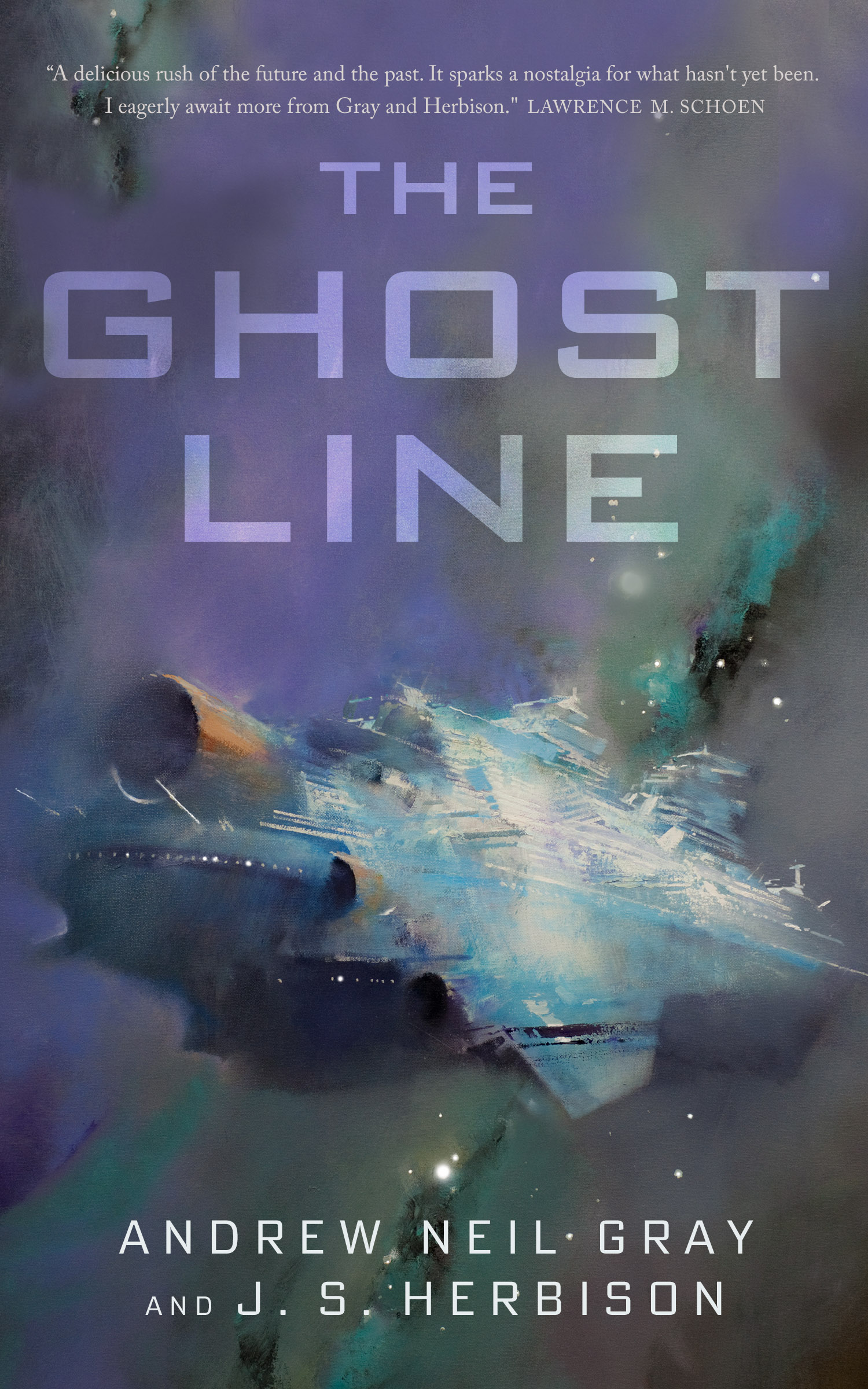 After we’d completed the first draft of The Ghost Line, we printed it out, cut it into scenes and taped it to the picture rail in our dining room. It covered half the room and stayed there for weeks as we pushed and pulled at the story, leading to questions from visitors. More than once we found friends of our children standing transfixed, trying to read our scribbled edits and sticky notes and work out what these odd adults were up to.

As we read through the first complete draft, posted to the wall, we realized there was a hole at the center of the book. So we filled it with an ice rink.

Saga, the protagonist, is invited to the rink by their pilot, Gregor, after receiving some upsetting news. It’s a moment of kindness from a character who’s previously been gruff and unapproachable. We realized the scene could do several things: humanize Gregor, who risked being a stereotypical hard-drinking Russian, provide some foreshadowing for events to come, and finally show off our unique setting.

The Martian Queen is a luxury space liner created for the Earth/Mars run, mothballed for years, but still impressive. She’s a character herself in the novella. There’s a magnificent foyer, a fancy dining room, two casinos. But these are not uncommon. We needed something special, something that would really stand out. So we created the recreation ring: a circular multi-purpose space that spans the entire circumference of the passenger section of the ship, which itself is spun to provide artificial gravity while underway.

They entered a dim vestibule. There was a second set of doors ahead, and Gregor motioned to her to continue. She walked out into winter. He joined her as she gaped at the scene. They could almost have been outside on Earth. Snowflakes drifted down from a pale sky above. She could make out the shapes of white hills and trees in the distance. Before them, a glassy surface.

“Here.” Gregor handed her a jacket and motioned to a bench by the side of the doors. Several pairs of skates lay there, unlaced.

She turned to Gregor. “How?”

“It is normally pool with small beach.” Gregor zipped his own jacket and sat down on the bench. “You could swim laps of ship, see water above, make faces.” He pulled an exaggerated expression of surprise and wonder, pointing upward. “Look, it doesn’t fall on us!”

Saga glanced at the skates. “You froze the pool.”

Gregor smiled. “There is winter setting. You and Michel are not only ones who can make hacks. You and I, we are northern people, no? This is a little like home.”

Things get a lot worse after this. There are creepy, dark moments to come as the entities that have taken up residence on the Martian Queen on her long, empty voyage make themselves known. There’s drama and death and strange transformations. But when we were thinking about ‘our favorite bit’ we both came up with the ice rink scene. It’s a moment of playfulness and wonder and the comfort of home. A sense of the truly exotic — ice-skating in space — but also an activity we enjoy every winter.

ANDREW NEIL GRAY and J. S. HERBISON are partners in life as well as in writing. The Ghost Line is their first fiction collaboration, but won’t be their last: a novel is also in the works. They have also collaborated in the creation of two humans and preside over a small empire of chickens, raspberries and dandelions on Canada’s West Coast. You can find Andrew Neil Gray at http://andrewneilgray.com and @andrewneilgray on Twitter. You can find J. S. Herbison at http://jsherbison.com.