Wendy N Wagner is joining us today with her novel An Oath of Dogs. Here’s the publisher’s description:

Kate Standish has been on the forest-world of Huginn less than a week and she’s already pretty sure her new company murdered her boss. But the little town of mill workers and farmers is more worried about eco-terrorism and a series of attacks by the bizarre, sentient dogs of this planet, than a death most people would like to believe is an accident. That is, until Kate’s investigation uncovers a conspiracy which threatens them all. 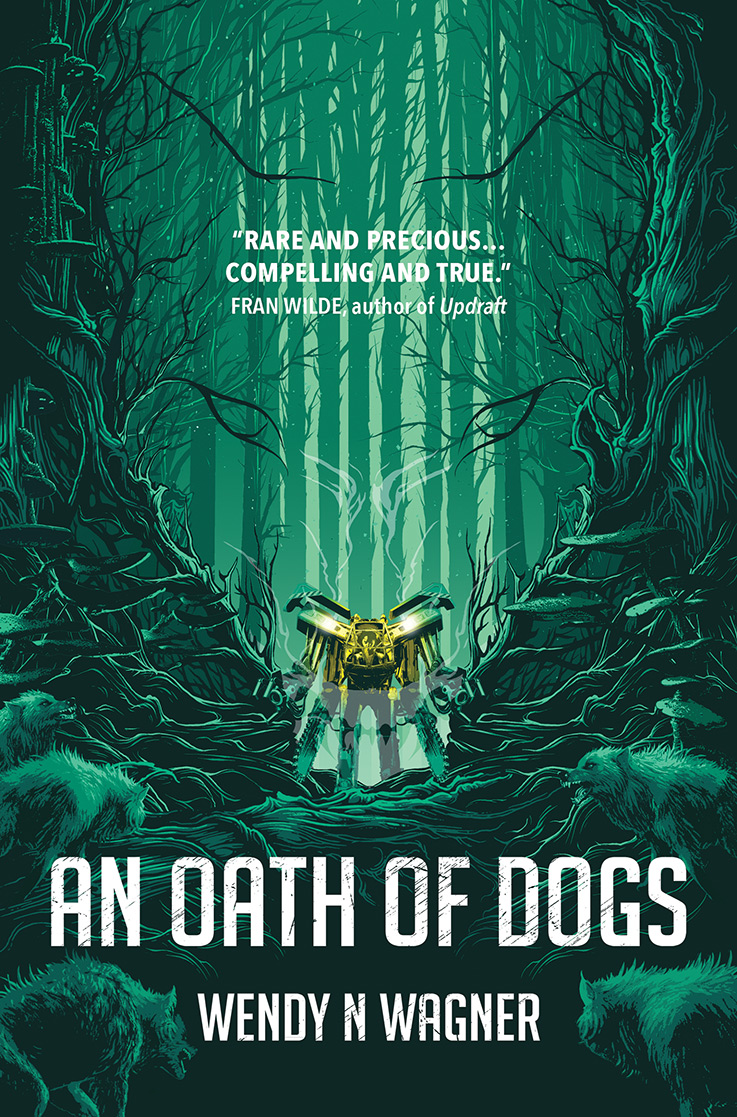 Before 1492, there were no night crawlers in North America.

Sure, a few intrepid wrigglers may have crept onboard Leif Erikson’s longboats; a cocoon or two may have clung to the soles of other forgotten European settlers—but the point is that of all the earthworm varieties living in the United States, more than 33% are as foreign to the Western Hemisphere as the Mona Lisa. The green forests of the Pacific Northwest, where I call home, was devoid of those pink, wiggly little critters that I love to see in my garden.

In a vegetable garden or a field full of browsing ruminants, an earthworm is useful thing. It swallows pieces of soil and rotting debris, digesting the bacteria it finds and expelling humic acid-rich casings (poop, for those of you who don’t speak garden-ese). Its movement through the earth carries organic material from the surface of the soil into deeper layers, feeding and oxygenating soil microbes who in turn nurture the plants around them. The food plants I grow are benefited by the work of the earthworm—just as, above the soil, they are benefited by pollinators like bees, butterflies, and beetles. Plants do not grow by themselves.

Needless to say, I spend a lot of time trying to encouraging plant allies in my own garden. I’m a composting fiend, always hoping to add beneficial bacteria to my veggie beds. I’ve planted hundreds of pollinator-attracting plants. I’ve established mushroom beds around my cherry tree. I’ve even purchased freeze-dried mycorrhizal soil inoculants that claim to help establish plant-friendly fungal and bacterial communities. I’d do just about anything to make the soil in my garden better for the plants I want to eat.

That’s why my favorite bit about An Oath of Dogs are all the little soil creatures I’ve managed to sneak onto the page. Hepzibah, a character whose diary gives us a taste of early colonial life, is incredibly focused on building good soil. European settlers in North America had no idea their plants had evolved to thrive in the presence of European soil organisms that were rare or unavailabe in the New World—that may be part of the reason their farms took so long to establish. But in the last fifty years or so, our understanding of plant and soil communities has flourished. With a better grasp of soil science, my colonists brought bales of compost and boxes of butterflies on their trip into space. They knew that people who need to eat need to encourage plant allies in their fields.

But never forget that every part of an ecosystem is connected. When we add new creatures to make it easier to grow something we like to eat, we can cause unexpected disasters. Today, scientists studying forest soils blame imported earthworms for erosion—and maybe even global warming. The honeybees Europeans brought to the U.S. helped wipe out native bee populations, leading up to the pollinator crisis we face four hundred years later. The ways we grow our food have vast effects on the ecosystems around us. And who knows what adding Earth organisms to a extraterrestrial environment will do?

That’s the question at the heart of my book, and it’s all wrapped up in my favorite stuff: soil science. I like to think of it as the dirty bits.

Wendy N. Wagner is a full-time science fiction and fantasy nerd. Her first two novels, Skinwalkers and Starspawn, are set in the world of the Pathfinder role-playing game, and she has written over thirty short stories about monsters, heroes, and unsettling stuff. An avid gamer and gardener, she lives in Portland, Oregon, with her very understanding family.