Alma Alexander is joining us today to talk about her novel Random. Here’s the publisher’s description.

My name is Jazz Marsh.

I am a Random Were, which means I am a Were of no fixed form – like all Random Were, my family can become any warm-blooded creature which is the last thing they see before they Turn. For me, when my time came, that meant… trouble.

I was quite young when I lost my older sister, Celia, and my family never spoke about her. It was only when I found the secret diaries that she had left behind that I began to discover the truth behind her life and her death.

I never understood what drove my moody and dangerous older brother until I began to get an inkling about his part in Celia’s death… and until, driven to the edge of patience and understanding, he finally had to face his own Turn problems… and disastrously took matters into his own hands.

One thing is clear.

Everything I thought I knew about Were-kind was wrong.

THIS IS BOOK ONE IN THE WERECHRONICLES SERIES 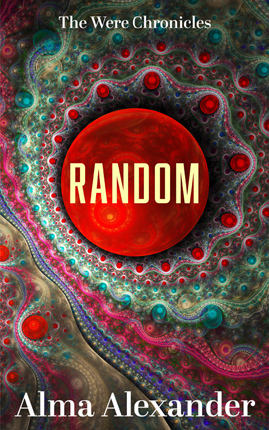 I have a bad habit of riding storyhorses without tack – that is to
say, I frequently find myself setting out to write a short story but
before I know it I’m 20,000 words in, clinging on for dear life, as
the thing simply decides it wants to be a novel and sweeps me right up
with it.

The tale that became the Were Chronicles started out in exactly that
way – it began as a short story slated for a specific themed anthology
(about Were critters), and it began ‘funny’. It started out as a
humorous little tale. Honestly. And then it did the *thing*, and by
the time I was hitting 5000 words I realised I hadn’t said hello yet
properly and this thing – much darker and more vivid now than  what I
had started to write –  just would NOT be stuffed into a short story.
It wanted to be a novel. And then, in short order, as the idea evolved
and grew like a mushroom in a nice cool dark place, not one but THREE
novels. And off we went.

I just finished writing book three in the series. The Were Chronicles,
all three of them, are possibly the best thing I’ve ever written, with
some of the best characters who ever walked my stories. And you know
what the best bit is? That I finally did a full circle and went back
and used the “wasted” education – I hold a MSc in Molecular Biology,
which I’ve barely used as and of itself,  and here I was, writing
fiction which returned to my scientist days and carved out a
magnificent storyline from REAL SCIENCE, stuff that could indeed be a
Real Thing (TM) in our own world, if our own world was just a TOUCH
more weird and wonderful than it truly is.

I delved into and created a solid  scientific background for the Were
kind. Their genetics. Their physiology. And there they both are, the
two great passions of my life, yoked up together, pulling in tandem,
making each other better.

Sometimes life just ties a bow on a gift and presents it to you. These
books… were a gift.

There are some excerpts online right now, at
http://www.theauthorvisits.com/tours/the-author-visits-presents-alma-alexander/
– one from “Random”, book 1 in the Were Chronicles, due out in late
October, and a sneak-peek excerpt from book 2, “Wolf” which is to
follow soon. They’re too long to include here – but do swing by and
take a look at them there. Enjoy. (And you have to read the rest of
the book(s) for the deeper scientific details…)

Alma Alexander is an internationally published novelist and short
story writer who has been wrangling words for a living for over 15
years. Readers and reviewers have compared her work to Amy Tan, Haruki
Murakami, J K Rowling, Octavia Butler… at the same time as insisting
that she is wholly original and unique and only, ever, herself. She
shares her life between the cedar woods of the Pacific Northwest
(where she lives with her husband and two cats) and the wonderful
worlds of her own imagination. More about her at www.AlmaAlexander.org