When I do a bid on a puppet, mechanisms are the most expensive part. They are fiddly things and no matter how many times you’ve built something similar, each puppet is radically different. This dog puppet, which I’m creating ears for, technically has four mechs in it since each ear is capable of two movements. The ears pull back for angry dog, and droop for sad dog.

As I was explaining to someone, I always quadruple the amount of time I think it will take to do a mech because it never goes right the first time. I’ve installed ear mechanisms on masks before. This was a thing I was familiar with. And yet…

I did a rough draft of the ears on Tuesday. On Thursday, I came back to install the final ears, but we weren’t sure where the puppeteer’s hand needed to be for the control. Saturday, I went in at three o’clock to install the triggers. I left at three a.m. Here’s what I did during those twelve hours.

While I had installed the ears on the exterior of the head, I wasn’t sure until I went in on Saturday where I would need to run the cables to control them. (Normally, you figure all of this out in advance, but there were some staging issues that needed to be resolved first, in this case.) The cable for the ears needed to move three inches in order to trigger the angry dog pullback. Unfortunately, where we needed to put the trigger, there wasn’t enough room for a lever to move that far. So, I needed to reduce the amount of distance that the cable had to move.

It’s sort of like a reverse block and tackle, because I was willing to increase the amount of resistance, to decrease the distance moved. But to do that, I needed to allow a length of line pass through the skull in a “v.” Another line would attach to that and pull it. So, I needed to cut a slot in the skull. I started by drilling four holes.

Once the slot was cut, I tested the ear. Which resolutely failed to work.

After a bit of cursing, some internet time and a conversation with my dad, who is a very clever man, I realized that I had attached the pull line with a fixed point, and it needed to be a fluid point. Such a silly thing to do. After that, it worked exactly as it was supposed to. Whew. 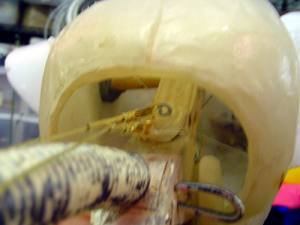 Sorry this is a blurry photo. All the cables have to come together to a fairly tight point where they run down the length of the dog’s spine. I’m using goldenrod cable (a flexible push-pull cable for model airplanes) to get from the head down to the handle where the trigger will be. That’s the thin yellowish cable, with the brass fittings on it. I have to use cable in a housing, otherwise the movement of the dog’s head would trigger the ears as the distance between the head and the trigger changed. A housing keeps that distance fairly consistent.

For the trigger, I opted to go with a wheel rather than a lever. The cable exits the housing and wraps around the wheel as it rotates. Rather than centering it, I put the pivot point off-center to give the puppeteer some mechanical advantage. We tested it and it worked well. Happiness.

I installed the other mechanism, which was comparatively simple. Again, running it back to a wheel. Suddenly the first mech acquired a lot of friction. I couldn’t figure out where it had come from since the new one didn’t touch it. In desperation, I pulled the second one out, thinking that its mounting might be binding the first one somehow. Nothing. I tried activating the mech from within the head without using the cable. It seemed like it was within normal limits there, which meant that the friction was occurring somewhere along the length back to the trigger. I undid the mounting on the first one, checked it for crimps and reinstalled it. Still, it had that awful friction. It was unworkable. I was baffled.

I pulled the trigger from the other mech completely off the handle and–the first mech got easier again. It was still tight, but it wasn’t unworkable. What we were facing turned out to be a combination of factors. The trigger for second mechanism put the puppeteer’s hand in a weaker position. It also activated a mechanism that naturally had less resistance, so the first mech’s trigger hadn’t actually acquired more friction, but it felt significantly harder compared to the second one. At the same time, the monofilament that I’d used had stretched out. I normally avoid the stuff, but because the dog was so pale I used that instead of the braided dacron (which is black) that I prefer. It was a bad combo all around.

Unfortunately there wasn’t anywhere else to install a trigger. It was also two o’clock in the morning. Emily had to get on a plane with the puppet later on Sunday, to Ireland. I was tearing my hair out in frustration.

What you see here is a mockup of what I wanted to install. I used the connector on the end of the cable and a ziptie to create a thumbgrip. Elastic held it in place. One slides the thumbgrip back and the ears droop. You can still hold the dog’s handle and operate the trigger for the first mech in a reasonably comfortable position. It is far, far from ideal, but it works.

This should have been a five or six hour job. My quadruple estimate was closer to being accurate. When Emily comes back with the dog, we’ll be able to fix it for the NYC shows in January.