“This is an operational spaceport…”

These weren’t the first words that I heard at the NASA Social event, but they were the ones that made everything real. I was going to an operational spaceport. It wasn’t a line from science-fiction.

I’m at the Kennedy Space Center as part of a program by NASA to make science more transparent by inviting in a group of social media folks. There are thirty-six of us from a wide swathe of life. There’s a 19-year old college student, a Tesla expert, a concert pianist, and me…  The idea is to reach out past the folks who already follow NASA and make space accessible to everyone.

Well… everyone who is willing to get up at 6:00am in order to to be processed by a bomb-sniffing dog. Am I willing to do that? Heck, yes. Twice, even, because I’m going back tomorrow.

The access that they gave us was incredible. We started the day with an overview briefing of the mission. Then we went to the Launch Control Center. No big deal, that’s just where they launched the moon missions. And the shuttle. As one does. While we weren’t allowed to take photos in certain areas, we were allowed in and shown around three of the four firing rooms.

I have taken pages of notes with details that will find their way into the Lady Astronaut books. For instance…

From there, we went to the Vehicle Assembly Building. It is the world’s tallest single story building. The interior is open to the roof and is the equivalent of a 52 story building inside. Here are some of the cool things:

Next came the terrible joke, “Are you go for lunch?”

Yes. Yes, we were very much go for lunch. Here it becomes clear that NASA spends all it’s money on getting things and people into space. The cafeteria looks like it hasn’t changed since the seventies and is frankly shocking after having gone to places like the Google headquarters. The food is obviously not why people work for NASA. It’s for the rockets and the science. 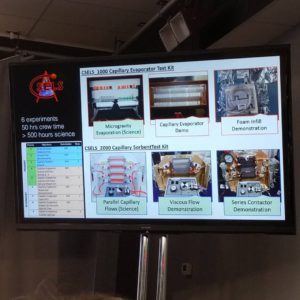 After that, we got to attend the “What’s on board” briefing, which was broadcast via Nasa.gov/live. You can watch it! You can see me ask questions. I kept having to bite my lip to keep from asking ALL THE QUESTIONS, because, really… they let a science-fiction writer loose in a room with a bunch of scientists.

These people are so passionate and enthusiastic. I really encourage you to take time to watch the video because the science that they are doing is amazing. Some of it has clear and immediate applications here on Earth. Other things are designed to make space travel easier, which in turn will make doing science in space easier. And also, just, science. It’s cool.

But here’s the real thing that you should take away… Follow @NASAsocial and when they tweet about a social coming up, just go ahead and apply. Even if you don’t get to attend a launch, it will be worth it.

Meanwhile, follow the hashtag #NASAsocial on whatever your favorite social media is. There are thirty-six of us tweeting about all the different exciting things. And each of us has a unique perspective but we’re all excited.

We’re at a freakin’ operational spaceport. In real life.