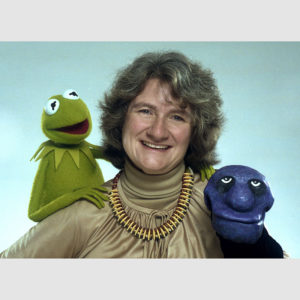 When I was starting out in puppetry, I went to my very first puppetry festival in Talequah, OK. I was bewildered by how many puppeteers were there. So many people, who all loved the same art form and loved it in all its varied forms.

I was standing in line in the cafeteria, a little overwhelmed and feeling a little out of place. So many puppeteers and I didn’t know any of them. For the moment, I had the more immediate problem of trying to figure out what the food was. It was all bizarrely orange. Scalloped potatoes, macaroni and cheese, cauliflower with cheese sauce, and… something else. Orange, but unidentifiable.

The woman standing next to me, older, charming, leaned over and said, “Do you have any idea what that is?”

She laughed and I turned to introduce myself, since I didn’t really know anyone. Then I saw her name tag. Jane Henson.

From the moment I met her, Jane was charming and supportive. She introduced me to people and set everyone at ease around her. As an advocate for puppetry, she was tireless and generous with her time. Beneath that layer of gracious charm she was also fiercely loyal. A friend once said that if Jane felt that a friend or family member was threatened, the skin would peel back and the mad dogs would come out. I never saw that, but I did see her lift people who were down, and laugh, and teach, and generally be fantastic.

I was lucky enough to serve on the board of UNIMA-USA and got to spend a lot of time with Jane then. Puppetry has lost a strong and wonderful voice.

There’s a website Celebrating Jane Henson (1934-2013) where you can read more about Jane and her contributions to the art of puppetry.