Of the awards given at WorldCon this year, the one I’m watching with the most interest (aside from short stories) is the Campbell. Since, by lucky chance, I’ve met all but one of this year’s crop of Campbell nominees, I decided to introduce them to you via a series of interviews.  I’ll post one each Monday for the next five weeks.

To start you off, meet David Anthony Durham, whose birthday it is today. 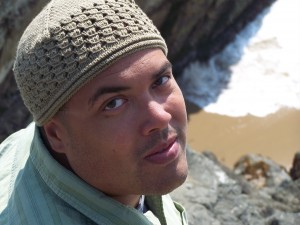 David Anthony Durham is the author of the fantasy novel Acacia: The War With The Mein (2007, Doubleday/Anchor), as well as the historical novels Pride of Carthage (2005. Doubleday/Anchor), Walk Through Darkness (2002, Doubleday/Anchor) and Gabriel’s Story (2001, Doubleday/Anchor). His novels have been published in the UK and in French, German, Italian, Polish, Portuguese, Romanian, Russian, Spanish and Swedish versions. Three of his novels are currently under option for development as feature films. The Other Lands, the sequel to Acacia, comes out in September 2009. David is a two time John W Campbell Award Finalist for Best New Writer.

So what did you do when you were notified about the nomination?
I skipped through the house and informed my kids, who were having a story read to them by their mother. They all take such things rather calmly. They just sort of looked at me, smiling politely and making noises. I wanted more. So I pointed out the fact that we’re all going to Montreal for Anticipation, which is even more… um, filled with anticipation now. They nodded and seemed a little more engaged. Then I mentioned that Neil Gaiman would be there. That sealed it. We all did happy dances, which was rather nice.

How long have you been writing?
I have  journal from eight grade that I filled with stories of warrior turtles with battle axes. I say in that journal that I’m going to be a writer. I did forget that for a while, and flailed around with other art forms and aspirations, but I’d gotten serious by college. By the time I was a sophomore I’d focused on writing again, and never stopped.

Can you point to any ways in which your time living abroad has influenced your writing?
I met the woman that became my wife and the mother of my children. That’s influenced everything.

How in the world do you balance your job teaching, time with your family and writing novels?
Very poorly. I always knew I wanted to be a full time writer, but I’d trained a lot for teaching as well. When a series of good offers jobs came my way, I accepted. I had to give it a serious try, be a grown-up and all that. The last few years it’s felt a bit like I’ve been working three and a half jobs: novelist, Associate Professor in Cal State Fresno’s MFA program and as a part time faculty member of the Stonecoast MFA program. I didn’t “balance” these things. I just sort of swayed drunkenly between them. And time with the family has suffered too. I’m often at home, but just being in the space physically doesn’t mean I’m there for them in the way I want to be.  So…

Things are changing. I’ll be leaving my job at Cal State at the end of this semester. Next July we’ll arrive back at our house in the woods in Western Massachusetts (we’ve been renting it), and there I’ll primarily write, while also continuing to teach for Stonecoast. That’s become a special thing for me, as they have a Popular Fiction emphasis to their MFA. I can work with aspiring writers, but can do so with fantasy and sci-fi and crime and historical works as the focus. It’s great fun. It’s my hope that this move will get the balance back in our home life. And I plan on producing more fiction than ever before!

Is there a definable point when you realized that writing had changed from a hobby to an avocation?
It never felt like a hobby. From college on everything I wrote was in the service of becoming a publishing novelist. Took a bit longer than I expected – two unpublished novels, for example – but I was always serious about it.

What projects are you working on now?
I’ve finished the sequel to Acacia, called The Other Lands, which will come out in September. I’ll be doing some copy editing and doing various pre-publication stuff for it. My next book will be the third and final book in this trilogy. It picks up right where the second volume leaves off. So I’m kinda in between the two volumes just now. I’m also about to read the screenplay Andrew Grant has written for Acacia. It’s not exactly work – since I’m not actively participating in the writing – but it’ll be interesting to dabble in movie stuff.

What are you currently reading?
I spent much of February reading applications to both Cal State’s MFA Program and the Stonecoast MFA also. I’ve read LOTS of applications, all on a very short schedule. Yikes. Glad that’s behind me. I found some very promising student writers in there, but still…
In terms of fiction I have four books open at the moment. I’m reading Kay Kenyon’s Bright of the Sky and the first Wild Cards book. And I have Ekaterina’s The House of Discarded Dreams under my bed at the moment. I’ve been enjoying it for some time, but it’s gotten into that cycle where I never manage to finish it because things keep interrupting. Those are my pleasure/professional choices at the moment. I’m also reading The Bourne Identity as part of a Popular Fiction course I’m teaching at Cal State.

What is it about speculative fiction, in general, that most appeals to you?
Fantasy taught me to read, to dream, to travel in my mind. CS Lewis and Tolkien and Ursula LeGuin were hugely important to me. But then I spent a lot years in college and grad school focused on literary fiction. I don’t regret that, and literary fiction will always be important to me too, but… A few years ago I realized that I hadn’t been ENJOYING reading as much as I wanted to. And I “realized” this because despite the literary setting I was living in I kept seeking out speculative authors: Octavia Butler, Frank Herbert, Neal Stephenson, Neil Gaiman… I was choosing titles from different places than my literary colleagues, and I was really digging those places. I fell in love with reading again. Why exactly I can’t say, except that by nature I like to read novels that mix ideas and characters with imaginative journeys. I crave both, and speculative fiction provides both in great measure.

Thanks, David, and Happy Birthday!