For people who liked “Kiss Me Twice” and ask if I’ll ever write another story with Metta again… Here’s the answer. 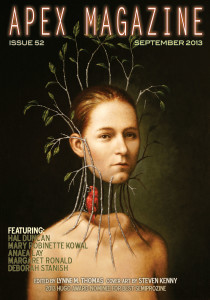 Saskia leaned into the darkness above the stage, only vaguely aware of the wood rail against her hips as she retied the left headstring on her marionette. On the stage below, the Snow Queen’s head eased into balance. The marionette telegraphed its stance back up the strings to the control in Saskia’s hands. She ran the Snow Queen across the set to check the repair, barely conscious of her own body on the bridge above the stage. It was almost like being immersed in an AR suit.

One of the techies called up. “Hey, Saskia? There’s a detective here for you.”

She stopped abruptly and the marionette continued its motion in a long pendulum swing. Detective? At the foot of the ladder, the techie stood next to a stocky man.

If she hadn’t taken her Specks off, she might have gotten an alert from her interface about who he was, but she’d caught the lenses once with a puppet control. You only needed to watch them hit the stage floor during a performance one time to swear never to wear them on a bridge again.

Even without the Specks, it was obvious he was a detective. Rather than the slimlines so hip these days, he wore full wraparound AI interface glasses, with an eBud in one ear. Above each eye, a camera provided the AI with stereoscopic vision. At his throat, where you’d usually see a collar stud, he wore another camera.

And that was just the hardware that she could see.

This originally appeared in 2009, in OSC’s Intergalactic Medicine Show. Since I wrote “Kiss Me Twice,” and expanded it into a novel, I needed to make some changes to “Body Language” to bring it into alignment with the KM2 universe. I took the opportunity to revise before sending it to Apex. Then Lynne Thomas worked her magic as an editor and asked for some additional changes. I think the revised story is much improved.

No, I don’t do revisions with every story, but sometimes it’s warranted.

To read the full story, head over to the current issue of Apex to read “Body Language” and make sure to check out the entire issue of Apex, which has original stories by Margaret Ronald, Anaea Lay, Hal Duncan, and Maurice Broaddus.