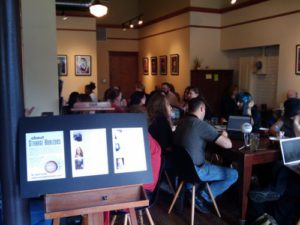 On Sunday, as part of a nationwide celebration of Strange Horizons‘ 10th anniversary, six Pacific Northwest authors gather to read selected shorts from the magazine at Case Study Coffee.

Case Study was a great host and we had a full house at the reading. Some of the folks came out to see a specific author, others were patrons of the coffee shop, and some came out to support the magazine.

Our format was that two authors would read and then we’d break for coffee and conversation and then the next two and so on. We recorded the readings and you can listen to them here. It’s about an hour and nine minutes and does not include the coffee breaks.

Since some of the authors stopped at cliff-hangers, I thought you’d like the opportunity to read the stories we read, which are all available on Strange Horizons.

I’d also like to encourage you to consider donating to the magazine. Strange Horizons has a staff of about thirty dedicated volunteers, and is funded entirely by donations.

Strange Horizons launched in September 2000 as a venue to showcase a new generation of science fiction and fantasy authors, a diverse range of voices and perspectives. The magazine has published new material every week for the past ten years: fiction, poetry, reviews, articles, columns, and sometimes even art and music. Every issue is available free online.  Stories and poems from Strange Horizons have been reprinted in major anthologies and been shortlisted for major awards, and many of the magazine’s authors have gone on to successful publishing careers.

2 thoughts on “Audio of the Portland Strange Horizons reading”