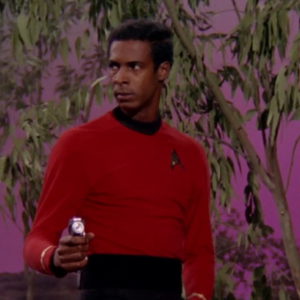 My dear fellow white science-fiction fans, let me use an analogy to try to explain one reason why people are so angry about what’s happening in Ferguson.

If you only watch one episode of Star Trek (original series), the fact that a guy in a red shirt dies is tragic, but eh— that’s television. But when you watch the entire series, you realize that a disproportionately high percentage of people wearing red shirts die.

It’s not that Captain Kirk has it out for people in red shirts. Heck, one of his best friends wears a red shirt. And Scotty never gets killed, so clearly not all red shirts die. And bad things happen to Kirk, too. But still— when you start paying attention, it’s pretty clear that wearing a red shirt in Star Trek is a death sentence.

That’s the thing that I see a lot of white people failing to understand about the anger surrounding the Mike Brown case. It’s not just one teenager and one cop. It’s a long series. When you start looking at the statistics, you can’t ignore that a disproportionately high number of African-Americans have been killed by cops every year for decades upon decades.

And this isn’t a television series that we can reboot and magically fix the problem. I’m lucky; the casting department didn’t hand me a red shirt, but I’m still living in a society that has a systemic problem. It effects everybody.

When you say, “But other people are killed, too,” you’re missing the point.  Wearing a red shirt hurts some of us at a disproportionately high level. And in the US, being born black is like being handed a red shirt by the casting department. Sure. You might be Uhura or Scotty. But they’re outliers and statistically, in a red shirt you’re more likely to be killed the moment you leave the ship.

This is, among other things, why people are upset. Because they know that they’ve been wearing red shirts and white people keep denying that there’s a pattern.

17 thoughts on “An analogy for white people: Walking while black is as deadly as being a redshirt on Star Trek.”