Tobias Buckell is joining us with It’s All Just a Draft, a curated collection of essays. Here’s the publisher’s description:

How much does the average author make? How long should my book be? Should I outline my book?

New York Times Bestselling author and World Fantasy Award winner Tobias Buckell started blogging about his path to becoming a writer in 1998. His website and frequent talks to writing workshops and universities contained snippets about his daily life, thoughts, and lots of tips about writing as he learned them. He set out to collect all these articles, posts, and speeches into a bundle he could give to people writing to him for advice. When he mentioned he was doing that, people suggested he turn it into a book, and here it is.

Inside you’ll find out the average advance a science fiction author gets, how many books it takes to break in based on survey of 150 other writers, and find out how Tobias broke into a career in writing. He talks about career, burnout, short stories, novels, craft tricks, and more. 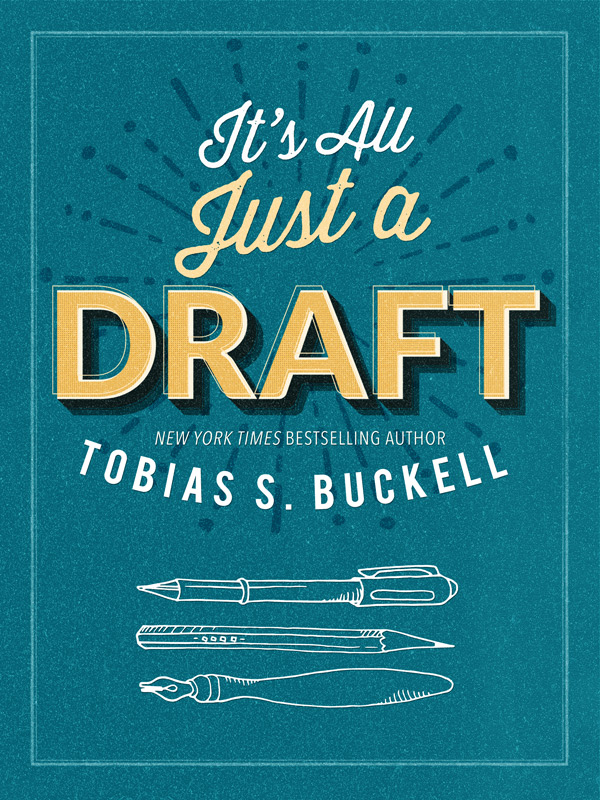 I have to be honest, that used to drive me a little nuts, until I vented about this to a friend of mine who was a doctor.

“It beats,” they told me wearily, “being shown random moles, or graphically told in detail about health issues random people you’ve just met are having.”

When I started going to writers conferences, workshops, and conventions as a baby writer, the one thing many of us obsessed about was the money question.

How much does a writer make?

We understood that it was a question that had a wide range of answers. Of course. But, to narrow it down, as a young writer, I’d find myself at a bar dancing around the question of how did I ask an already published novelist ‘how much of an advance did you get on your last novel?’

It’s considered uncouth. Some of that information can come once you’ve made friends with a variety of writers selling books in your social circle. But then it puts the onus on you to have a good networking skills.

So back in the early 2000s, we read about every deal announced on Publishers Marketplace and tried to read the tea leaves.

Online, new writers argued constantly about what a ‘typical advance’ would be. Long threads would appear with much vitriol and supposition. Friends became enemies, random numbers were thrown around, and I became tired of it all.

I built a survey on my website, using what little code skills I had to create forms that emailed me results, and then asked working science fiction and fantasy writers to tell me what their last advance had been. I gave them the option to put in the answer anonymously or to let me have their name, promising I wouldn’t put that info on the final general results.

Hundreds of writers filled out my forms, enough to get a decently sample size, and I set about putting all that information into an excel spreadsheet. I created graphs and published the results on my website. Fifteen years later, it’s still the most visited page there.

More writers since then have shared what they make publicly. And since creating the survey, I went on to have a career of my own where I learned that the advance paid for a novel is just one of the money streams for a writer. There are speaking gigs, royalties, translation money, audio rights, media money, and more! But that article on my website to this day answers a very basic question: what’s the average novel advance?

I went on to write more writing-related posts at my website over the years as I learned new things and shared them when I could. And over the years I gathered enough of them together that I would bundle them up into a word document for people who wrote to me asking for advice about being a writer.

Because, as I mentioned above, I get as many questions about the craft of writing itself as my own work.

Eventually, I decided to bundle these essays I’d written up, combine them with articles I’d written for magazines about growing up in the Caribbean while reading science fiction, and create an entire book about writing. It’s called “It’s All Just a Draft,” sort of like my own writerly version of “Don’t Panic!” In it, I weave the story of how I became a writer, as I felt context really matters for writing advice, and talk a great deal about mindset, not specific rules (though I do have some tricks and formulas I share that I picked up along the way).

But, my favorite bit will always be the data-centric article I first wrote online that is still to this day the most popular page on my site.

Oh, you want to know how much writers make?

Well, anywhere from $0 to $600,000 as an advance on a book, a little over ten years ago, before digital self-publishing took off. As a writer in the field, I can’t see that much has changed.

You can read the entire 2006 article and see all the data at https://tobiasbuckell.com/author-advance-survey-version-20/ and if you wanted to read more about how I went from a Grenada-born reader to a high schooler submitting short stories to magazines in the US, to eventually breaking into publishing while in college (and if you’re wondering how did I end up living in the US when I grew up on a boat in the Caribbean) you can find my latest book “It’s All Just a Draft” for sale below.

Tobias S. Buckell is a New York Times Bestselling author and World Fantasy Award winner born in the Caribbean. He grew up in Grenada and spent time in the British and US Virgin Islands, which influence much of his work.
His novels and almost one hundred stories have been translated into nineteen different languages. His work has been nominated for awards like the Hugo, Nebula, World Fantasy, and the Astounding Award for Best New Science Fiction Author.
He currently lives in Bluffton, Ohio with his wife, twin daughters, and a pair of dogs. He can be found online at http://www.TobiasBuckell.com and is also an instructor at the Stonecoast MFA in Creative Writing program.
Did you know you can support Mary Robinette on Patreon!