Jane, Lady Vincent could never be considered a beauty, but possessed of a loving husband and admirable talent, had lived thirty years in the world with only a few events to cause her any true distress or vexation. She was the eldest of two daughters of a gentleman in the neighbourhood of Dorchester. In consequence of her mother’s nerves, Jane had spent the better part of her youth acting as mother to her younger sister, Melody. Her sister had received nature’s full bounty of beauty, with all the charms of an amiable temper. At the age of twenty, it was therefore surprising to find Melody not only unmarried, but without any prospects.

Since Jane’s marriage, she had rarely been to visit her parents, but finding herself there for an extended holiday visit, she had ample opportunity to observe her sister. While Melody still possessed the natural grace she always had, the bloom upon her cheeks seemed dimmed. Jane suspected that the unseasonable March snows, which kept so many families indoors, had limited the opportunities for the society that her sister so delighted in. If could she leave the house to take walks, perhaps that might have restored her humour but in want of occupation, Melody had become afflicted with severe melancholy.

Jane knew all too well how the want of purpose could oppress even the brightest spirit.

And so Jane had taken it upon herself to host a card party, inviting all those neighbours who were willing to make the trip to Long Parkmead.

“Have you had much luck this evening?”

She seemed disinclined to say more, where once she would have soliloquised about how many fish tokens she had won at the card game.

“And you are satisfied with that?”

Knowing that the headache was a fancy of her sister’s to explain away her lowness, Jane sighed. Her breath frosted the window for a moment. Struck by an idea, she leaned forward and blew on the glass. She drew a bird on the fogged pane. “Do you remember when we tried to draw snowflakes in all the windows for Christmas?”

Melody shook her head, a single line appearing between her brows. Forcing a smile, Jane tried not to let the disappointment show on her face. It had been one of the treasured memories of her childhood. “I suppose it is not surprising. I was thirteen, so you could have been no older than three, I think. You wanted to learn glamour but were too young to hold the folds. I showed you how to fog the glass and you went around ornamenting all the windows.”

“Little has changed then, since I still cannot work glamour.” Melody glanced over her shoulder. “How is Vincent enduring the party?”

“Tolerably, though I had to rescue him from Mrs. Marchand once, who tried to insist on his being the fourth for a hand of whist.” Jane wrinkled her nose at the thought of her taciturn husband being forced to sit next to their sociable neighbour. He now stood engaged in conversation with her father. Though he held her father in high esteem, Vincent still had an edge of tension to his stance, simply from being in a room with so many people.

“La! He is patience embodied.”

“I promised him that as soon as we perform the tableau vivant Mama requested, he can retreat under the pretence of fatigue.” An illusion such as a tableau vivant would not ordinarily be enough to tax the strength of a professional glamourist such as Vincent, but Jane was quite willing to take advantage of her mother’s sometimes excessive imagination to offer her husband an escape.

“I declare, I do not know how you managed to attach such a hermit, but sometimes I am exceedingly jealous.” The shadow came back to Melody’s countenance as she leaned forward to blow on the window. With a finger, she drew a simple snowflake. “I almost remember, I think.”

“I look forward to wishing you joy.”

“You may hold that wish for a long time.”

“With your beauty? My dear sister, you were made to attach gentlemen.” Jane tried to tease her sister back into something like her natural spirits.

“Really?” Melody dropped her finger and turned to face Jane fully. “Who should I attach?” She glanced toward the room filled with their friends and neighbours.

Standing with her sister made the room change in aspect, as though a glamour had been drawn over it. Where before Jane had noted the merriment and general air of pleasant conversation, she now attended to the individuals. The room seemed composed almost entirely of women, young and old. There were men, to be certain: Mr. Prater, the old vicar; their father, Mr. Ellsworth; Mr. Marchand and his assembly of daughters . . . but there was not a single young bachelor. Once their neighbourhood had held several eligible gentlemen, but many of them had gone away to fight Napoleon and never returned. Others had left for different reasons.

Jane had thought that Melody’s depression was due to being confined indoors, but her loneliness was of a far deeper nature than that.

The morning after the card party, Jane made her way down the hall to her father’s comfortable study at the back of the house. He had always been a source of steady counsel for her, and she had hopes that he might have some thoughts on what to do for Melody.

Voices met her in the hall. She hesitated on the threshold of the study.

Mr. Ellsworth looked up from a sheet of paper that he was bent over with Mr. Maulsby, the estate manager for Long Parkmead. “Come in, Jane. We will be but a moment longer.”

She slipped into the leather wingback chair by the fire and made herself comfortable. She had known Mr. Maulsby all her life and he had long been a good steward for her father’s estate. His father, before him, had attended to the running of the fields and harvests and all the other things, which good English culture required. He was a tall man with a perpetual stoop to his shoulders, which Jane thought must come from spending so much time hunched over his papers or looking at the ground. His hair had silvered in time, like her father’s, but remained as thick on his head as always. He nodded to her as she settled in her chair, but did not break his conference with his employer.

“I’ll tell you true, Mr. Ellsworth, I think we have to replant the south and east fields. The sprouts were just coming up when this hit and now they’re black in the ground.” The manager tapped the paper with one nail-bitten finger. “Perhaps the northwest one too, but that gets more sun because of the elevation, so it might be all right if the snow passes soon.”

“You are certain? No—no, I know that you are, or you would not come to me.” Mr. Ellsworth sighed heavily and scratched his thinning pate. “Well. Well. You had best order the seed, then, before the prices go up any further.”

“Yes, sir. That I’ll do.” Mr. Maulsby rolled up the paper. “It’s worse up north, I hear. The ground’s not thawing at all. If this keeps up, we’ll see food riots.”

“Let us hope, then, that the weather warms soon.”

“Aye, or we’ll have troubles in the autumn bringing in the harvest.”

“We shall fret about that when it happens.” Mr. Ellsworth clapped the estate manager on the shoulder and saw him out. After the man had gone, her father stood in the door for a moment before sighing heavily. When he turned back to Jane, he had a smile on his face, which she was certain he wore solely for her benefit. “What can I do for you, my dear?”

“I feel that I should ask the same of you.”

Mr. Ellsworth grimaced. He glanced down the hall and shut the door. “You will not tell your mother?”

She shook her head. Mrs. Ellsworth was a good woman and not without understanding, but her worries sometimes carried her far beyond reason. Jane was well used to guarding her mother from things that would upset her without need.

Settling into the chair opposite her, Mr. Ellsworth crossed his legs and stared into the fire. He was silent for some minutes, fingers moving across the arm of the chair as though he were plotting on the leather what to tell her. “Well. Well . . . as you might have heard, the cold has killed our barley shoots. We can replant, but it is an expense I had not looked for.” He offered her a sorrowful smile. “It will not ruin us. Others will not be so lucky. But there is still a cost, and I worry, as always, about making sure that my daughters are provided for.”

Jane reached over and took his hand. “You know that I am provided for, at least.”

He chuckled. “I am your father. One never ceases to worry.” He patted her hand. “But—but you are correct. Melody is my chief concern. I will not need to touch her portion, or anything so severe, but in spite of my steward’s brave words, I must plan as though this harvest might fail.”

“Do you think that likely?”

“No. But then, I have never seen it snow so late in the year. A flurry, perhaps, but we are very nearly in April and there are eight inches of snow upon the ground. I would be a fool not to consider how we might retrench if the harvest were to fail.” He shook his head and patted her hand again. “Do not let your mother hear the word ‘retrench.’ ”

Jane could well imagine the terrors her mother would create at any talk of practising economy. “I promise I shall not.”

He released her hand to tend the fire. “I had hoped to send Melody to London for the Season. She is . . .”

“Yes.” Jane had the uncomfortable sense that her father was waiting for her to offer a cure for her sister’s depression. She had none. “Perhaps Bath? It is not so expensive, and might offer her some prospects.”

“Do you think? The last trip went so poorly that I fear a trip to Bath might revive her wounded sensibilities.”

Jane bit the inside of her lip. She had not considered that at all. The road to Bath was where Melody had lost all hope for the man she had loved. “We are both resolved, though, that a change of scene would do her good?”

“Indeed.” Mr. Ellsworth shifted his chair closer to the fire. “But perhaps we are showing unnecessary alarm, and London will be possible after all.”

Outside the window, the snow continued to fall. Jane could not allow herself to hope that her father’s optimism was correct.

Return to Without A Summer 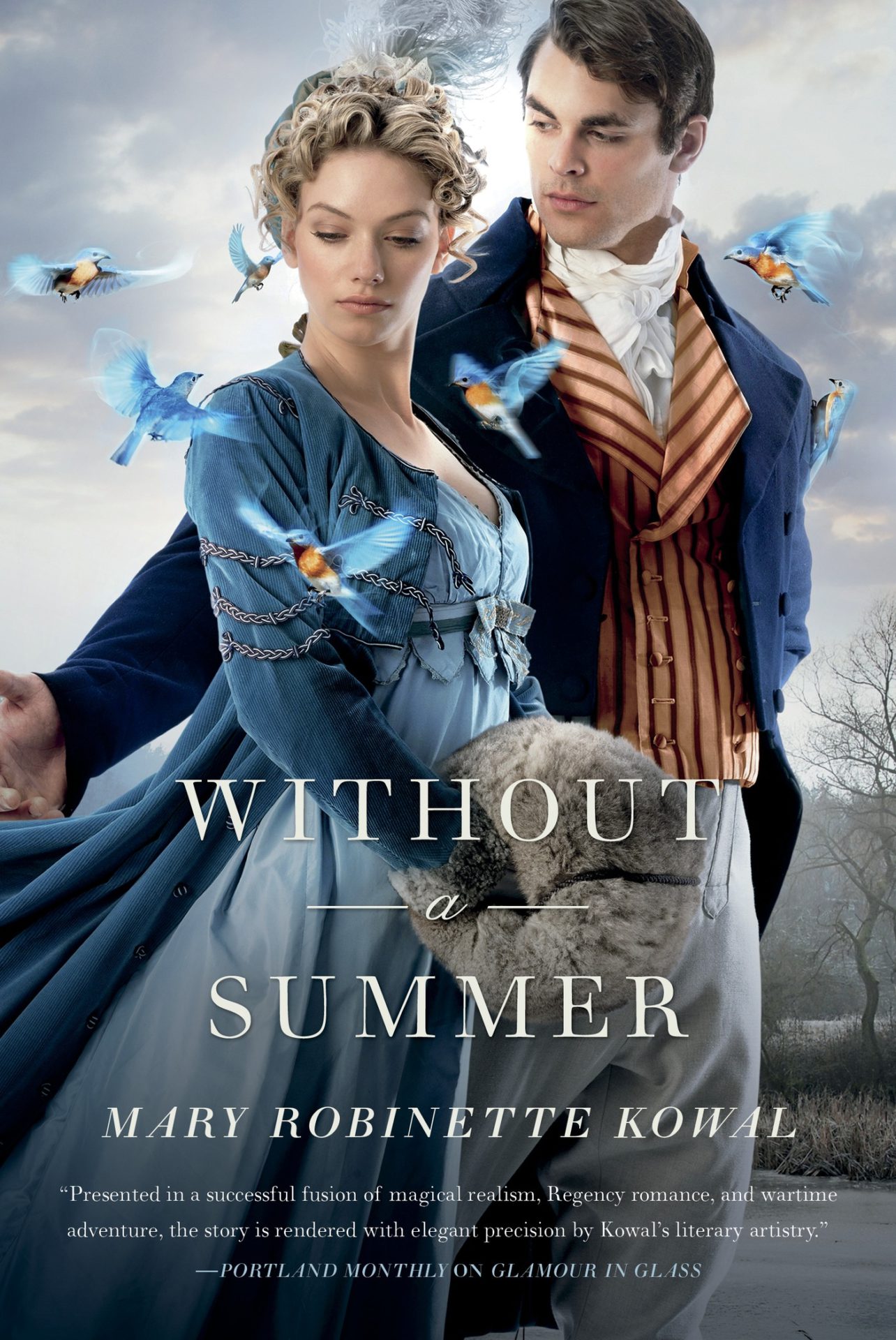