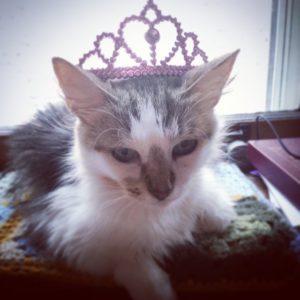 I know, I know… It wasn’t on the list of names we were considering, but allow me to explain why it fits her so well.

The one thing you can’t tell from these photos is how incredibly tiny she is.

Finally, if you are in the Chicago area and are looking for a new cat, allow me to highly recommend Critical Animal Relief Foundation. They take excellent care of fosters and spend a lot of time making sure that that the forever homes are a good match. The photo album of adoptable kitties is soooo sweet.

3 thoughts on “New Cat has a name… Welcome Sadie.”