Wendy Trimboli and Alicia Zaloga are joining us to talk about their novel The Resurrectionist of Caligo. Here’s the publisher’s description:

With a murderer on the loose, it’s up to an enlightened bodysnatcher and a rebellious princess to save the city, in this wonderfully inventive Victorian-tinged fantasy noir.

“Man of Science” Roger Weathersby scrapes out a risky living digging up corpses for medical schools. When he’s framed for the murder of one of his cadavers, he’s forced to trust in the superstitions he’s always rejected: his former friend, princess Sibylla, offers to commute Roger’s execution in a blood magic ritual which will bind him to her forever. With little choice, he finds himself indentured to Sibylla and propelled into an investigation. There’s a murderer loose in the city of Caligo, and the duo must navigate science and sorcery, palace intrigue and dank boneyards to catch the butcher before the killings tear their whole country apart.

What is Alicia’s favorite bit? 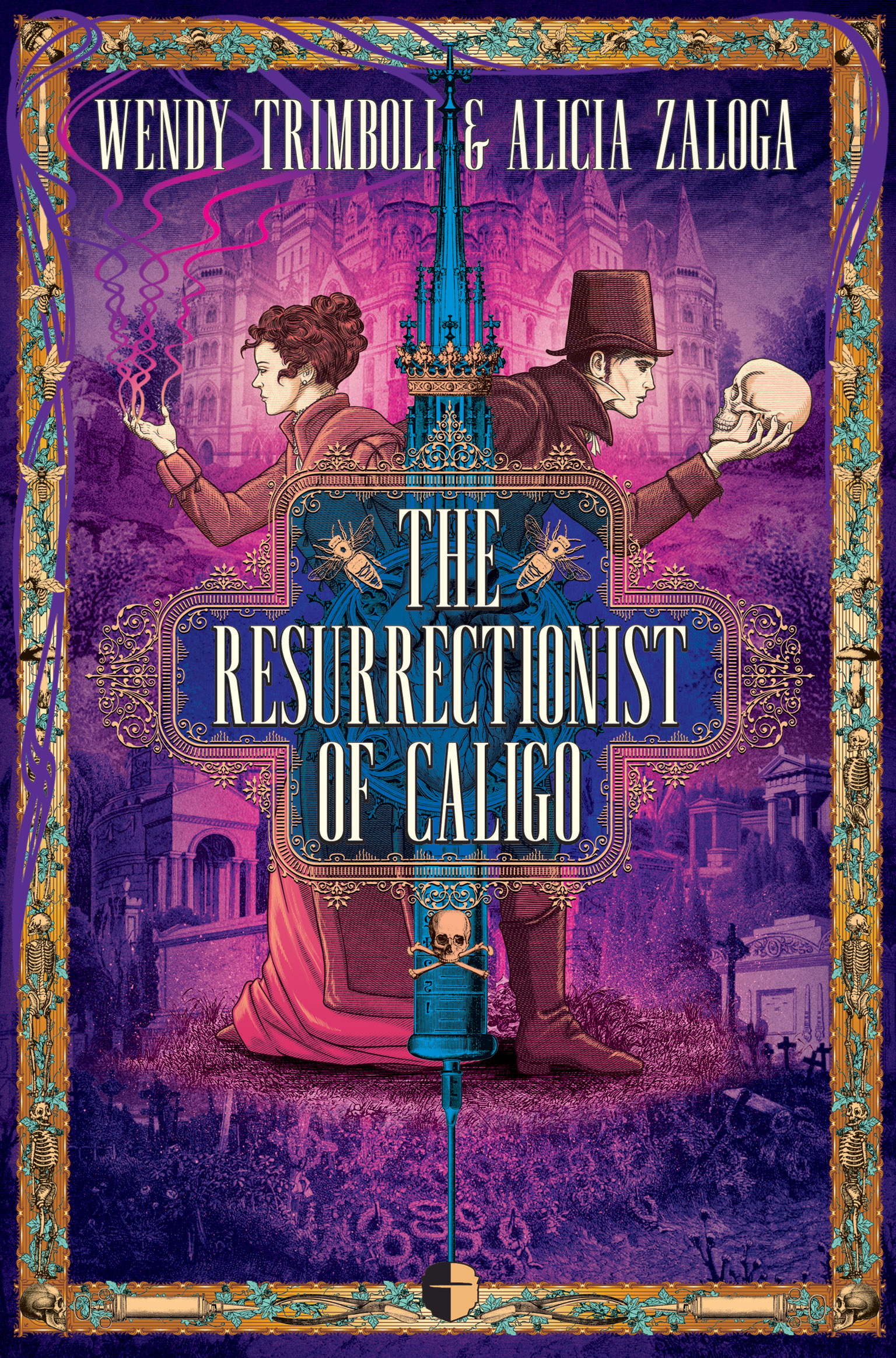 As coauthors of a book, it’s difficult to pinpoint the utmost favorite bit. Wendy’s favorite bit is not necessarily my favorite bit and vice versa. However, during the whirlwind creation phase of throwing everything and anything into The Resurrectionist of Caligo and then some, there is one scene that sticks out as magic—a synergistic place in book time when two authors, with two competing headspaces, had to deal with the natural fall out of a slow burn relationship between our two main characters taking place on a stairwell.

At the start of our novel, Sibylla the Wayward Princess and Roger the Vagabond Resurrectionist have already had their youthful love affair, and to say it did not end well would be an understatement. Many books begin with two characters and their fated meeting with one another. We wanted to begin ours with two characters who’d already been through the relationship cycle—cute childhood meeting, kissing beneath the boughs in adolescence, and inevitable painful teenage breakup. Feelings one has for an ex are complicated. Between Roger and Sibylla, there are two broken hearts (one of which has mostly moved on) made worse by differing worldviews, past misunderstandings, and a murder or three. There’s pining and anger and the crossover of both these emotions. Now as adults, they want to see one another again, but there’s also a desire to give the other person a dressing down while they’re at it.

The fruition of this thorny emotional landscape between former friends turned paramours turned exes takes place in a dark and dingy—one of the two might even say rancid—stairwell that leads to the garret where Roger resides above the butcher’s shop, barely scraping together his back rent. Their meeting is a long time coming. It became a favorite because of the variety of logistical and emotional complexities inherent to the scene, including an interested onlooker, the tiredness that comes from the end of a long workday, and all the past and present fuzzy and not-so-fuzzy emotions they have for one another.

I should probably explain here that our writing process is sometimes incredibly, ridiculously, collaborative. On occasion, sentences can be minutely examined, rewritten (and rewritten and rewritten), and comments given until the narration becomes a torn apart and glued, sewed, and duct taped back together again monster of collective thought and choice. A sample sentence might read: Three words Wendy wrote followed by two words I wrote, another Wendy verb, and finally four words I chose before that punctuating period. Despite this process, the one thing we agreed on in the revision partnership stage was that we had to respect the other person’s final say on whether or not our main characters would, or would not, say or do something.

That’s why a scene, such as that which takes place in the stairwell of the building where Roger lives, is so impactful, not only for the characters but for us as co-creators. While I’m “the” Sibylla authority, Wendy is “the” Roger authority. When our main characters share the page, so too do we authors. This one little scene went in a direction neither of us had originally intended.

In the very original draft, it ended rather comically with Sibylla saying something to the effect of, “I’ve got things to do, ta-ta.” Of course, this was never going to be enough, but at the time neither of us had fully discovered the emotional weight of this encounter. When we finally did, it became, in many ways, a scene of personal declarations for our main characters, one that explored how their respective pasts and presents collided to terrific and horrible result. Sibylla ended up saying a bit more than “ta-ta” and so did Roger. No matter how many drafts, no matter how many nuances were added or changes to the story made, the stairwell scene always remained this crystallized moment between Roger and Sibylla, and by extension between us as their creators.

It may only encompass a few pages of the whole book, but it is representative of that time our characters provoked one another into saying and doing things they never would have said or done had we not been co-authors. For Wendy and me, it was the perfect example of what we could accomplish when we allowed each other the freedom to express our characters on the page, and I can’t think of a better favorite bit to act as our creative beacon.

ALICIA ZALOGA grew up in Virginia Beach not liking the beach, and now moves every few years, sometimes to places near beaches. She has a writing degree from Columbia College Chicago, and when she’s not dealing with life’s chores, she collects hobbies: plucking the E string on the bass, producing an alarming number of artistic doodles, and French beading floral bouquets

WENDY TRIMBOLI grew up in England, Germany and the United States, and learned to speak two languages well enough that most people can understand her. Determined to ignore her preference for liberal arts, she attended the US Air Force Academy then worked as an intelligence officer, which was less exciting than it sounds. These days she has a creative writing MFA from Vermont College of Fine Arts, and lives in Colorado with her family, border collie, and far too many books.