Today Sally Kilpatrick joins us to talk about her new novel, The Happy Hour Choir. Here is the publisher’s description:

From debut author Sally Kilpatrick comes a hopeful tale of love and redemption in a quiet Southern town where a lost soul finds her way with the help of an unlikely circle of friends. . .

Life has dealt Beulah Land a tough hand to play, least of all being named after a hymn. A teenage pregnancy estranged her from her family, and a tragedy caused her to lose what little faith remained. The wayward daughter of a Baptist deacon, she spends her nights playing the piano at The Fountain, a honky-tonk located just across the road from County Line Methodist. But when she learns that a dear friend’s dying wish is for her to take over as the church’s piano player, she realizes it may be time to face the music. . .

Beulah butts heads with Luke Daniels, the new pastor at County Line, who is determined to cling to tradition even though he needs to attract more congregants to the aging church. But the choir also isn’t enthusiastic about Beulah’s contemporary take on the old songs and refuse to perform. Undaunted, Beulah assembles a ragtag group of patrons from The Fountain to form the Happy Hour Choir. And as the unexpected gig helps her let go of her painful past–and accept the love she didn’t think she deserved–she just may be able to prove to Luke that she can toe the line between sinner and saint. . .

So what is Sally’s favorite bit? 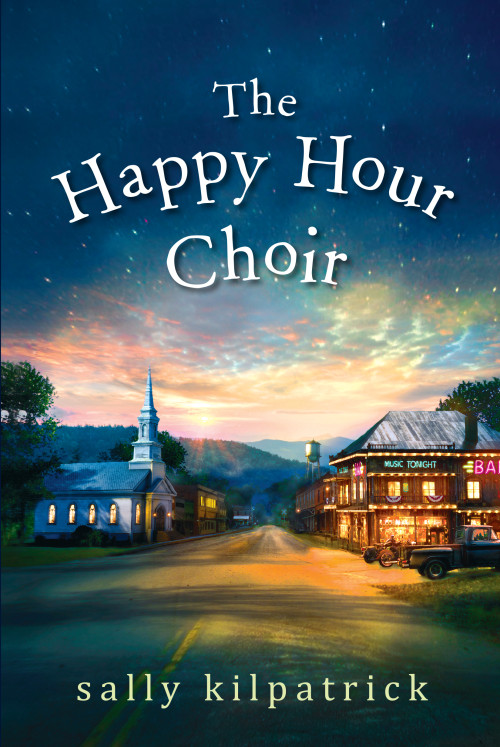 Let me set the scene a bit: My contemporary southern fiction, The Happy Hour Choir, revolves around Beulah Land, a fallen from grace honky-tonk piano player. Beulah was kicked out of her mother’s house when she was sixteen and has been living ever since with her octogenarian piano teacher, Ginger Belmont. Ginger has also taken in Tiffany, a waitress at the bar where Beulah works. At this point in the story, she and the minister she’s fallen for are about to go out on their first real date, a double date with Tiffany and her beau. Ginger has been imparting wisdom to the younger ladies. Beulah is your narrator.

… I was still trying to wrap my mind around [what was said to Tiffany] when Ginger pressed a stack of crinkly packets into my palm. “You’re not too old to have fun, either. You have my permission to make a sinner out of that saint.”

My eyes widened to match my mouth. “Ginger Belmont!”

At the sound of Tiffany’s sensible shoes clunking on the stairs, Ginger pointed upward, and I stuffed my “gift” into my purse.

The doorbell rang. Ginger hugged Tiffany then pulled me into an embrace.

“Life is short,” she whispered. “Life is awful damn short.”

This is my favorite bit for a couple of reasons. First of all, it’s where I first got the idea to play around with the concept of sinners and saints. Ginger Belmont has seen some things in this old world. She understands human nature better than most of us, knowing that not one person is all sinner or all saint. Life isn’t perfect; it’s still precious. She’s urging Beulah to romantically consider Luke, but she does it in a responsible and surprisingly modern way. I like to think of Ginger as the voice of reason in the book.

I also chose this selection because it proves plotting a novel doesn’t mean you get rid of all of the surprises. I, like Beulah, had absolutely no idea that Ginger was going to hand her a wad of condoms. I remember audibly gasping when I wrote the scene because prim and proper Ginger did the exact opposite of what I would’ve expected. I may have plotted the entire novel before I wrote it, but there were surprises aplenty, this one chief among them.

Finally, I had to do some interesting research for this portion of the novel. Did you know that Methodist ministers vow to be celibate while single? Did you further know that there’s more than one definition of “celibate”? I must’ve wasted an entire day trying to figure out how many bases my poor minister could reach without breaking his vows. I guess you’ll have to read the book to read that particular box score!

Thanks so much for letting me participate with My Favorite Bit! I knew I loved this scene more than the average bear, but writing about it gave me the chance to delve into the why.

Unable to decide between literature and writing, Sally Kilpatrick received a B.A. in both from the University of Tennessee, Knoxville. After eight years of teaching Spanish (because that’s what you do with an English major), she earned her MAPW from Kennesaw State University. She has since sold three books to Kensington. The first of these, The Happy Hour Choir is out. . . now! She serves as President of Georgia Romance Writers and lives with her husband/trusty manservant, two precocious kids, and two mischievous cats in Marietta, GA. You can often find her at www.sallykilpatrick.com or on Twitter under the handle @SuperWriterMom.