Rebecca Roanhorse is joining us today to talk about her novel Trail of Lightning. Here’s the publisher’s description:

While most of the world has drowned beneath the sudden rising waters of a climate apocalypse, Dinétah (formerly the Navajo reservation) has been reborn. The gods and heroes of legend walk the land, but so do monsters.

Maggie Hoskie is a Dinétah monster hunter, a supernaturally gifted killer. When a small town needs help finding a missing girl, Maggie is their last best hope. But what Maggie uncovers about the monster is much more terrifying than anything she could imagine.

Maggie reluctantly enlists the aid of Kai Arviso, an unconventional medicine man, and together they travel the rez, unraveling clues from ancient legends, trading favors with tricksters, and battling dark witchcraft in a patchwork world of deteriorating technology.

As Maggie discovers the truth behind the killings, she will have to confront her past if she wants to survive.

Welcome to the Sixth World. 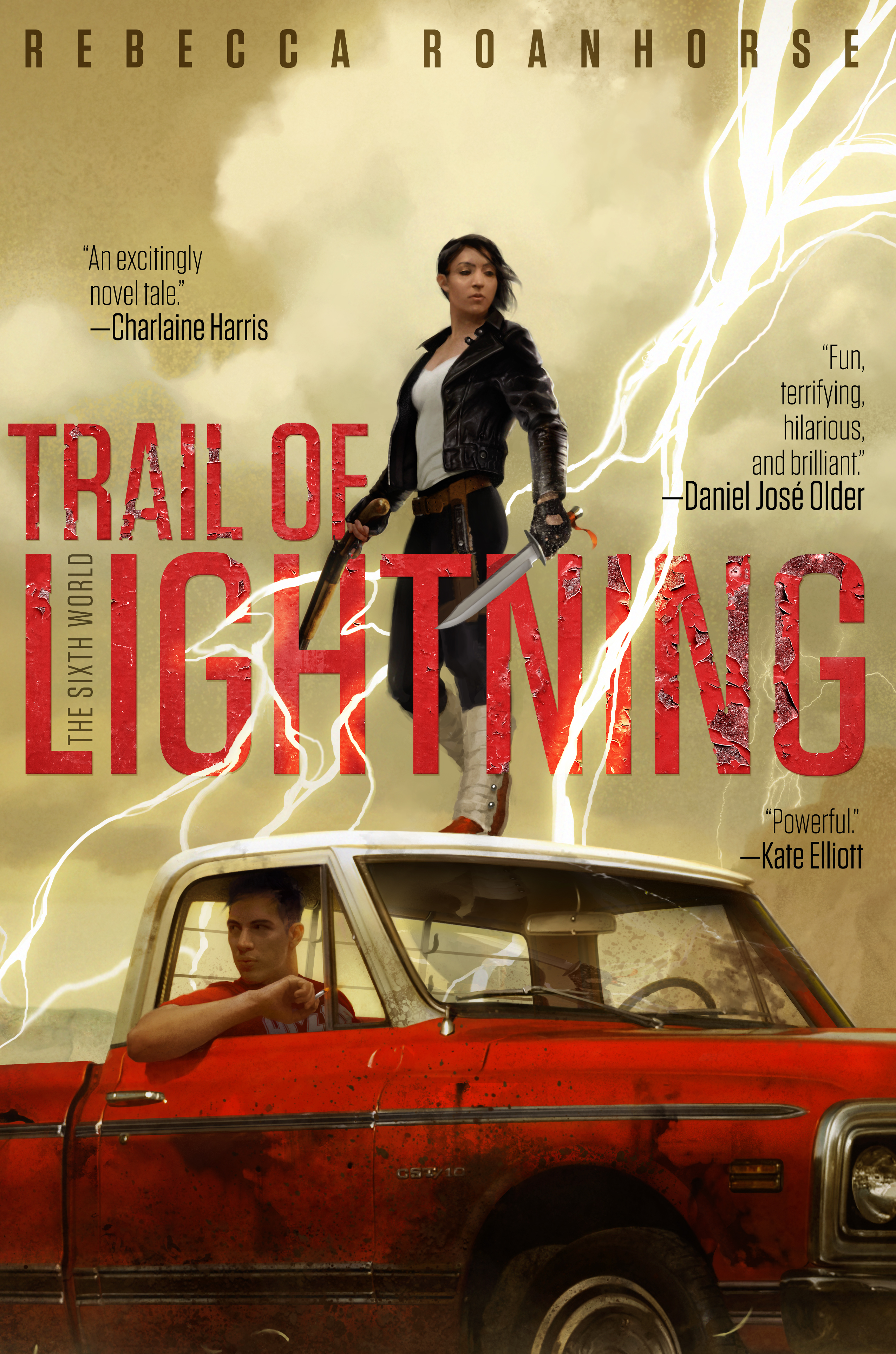 Music plays a huge role in my creative process. I put together a soundtrack for my novels as I’m outlining, and for the rest of the drafting and editing process, the soundtrack serves to keep me focused. I try to pick songs I don’t already have an association with, and then I don’t listen to those songs outside of working on the novel.

My book soundtrack functions in a couple of ways. First, as a sort of Pavlovian bell to get me into the headspace I need to be in to write, very quickly and without a lot of atmosphere required. A cup of strong coffee, a set of headphones and Spotify is enough to transport me to the apocalyptic future of the Navajo reservation, even when sitting in some featureless airport or hiding in the car at my kid’s soccer practice. But the primary function of the soundtrack is what I eluded to earlier. It embodies the mood and the themes of the novel. A song can come to represent a scene, like “Short Change Hero” or “Warm Shadow”. Or it can keep me focused on a character’s personality, like “The Difference Between Us”. Sometimes a song simply functions as zeitgeist, like “Why Did Love Put a Gun in My Hand”. So here are five songs from the “Trail of Lightning” book soundtrack and the reasons they are part of my favorite bit.

Trail of Lightning is set on a post-Apocalyptic Navajo reservation, but I wanted to capture a lot of the pathos of the classic Western and then play with the tropes by letting a Native woman be our hero, or anti-hero, as it were. The opening scene has our MC, Maggie Hoskie, enter a room of hostile townspeople that need her help. The scene unrolls from her POV as she pushes open the door and people turn to stare, judging her. She walks through the crowd, her moccasins silent against the tile floor. The townspeople offer her money for her help, and at first she balks because of the low pay. But when they promise her more, she takes the job. The whole scene is meant to evoke the classic Western opening of a mysterious stranger riding into down, boot heels sharp against the floor as he enters a saloon and the crowd falls silent. And this song is perfect for this mood. Plus, it let’s you know right away, as does the MC, that this might not be a hero story after all.

This is one of those songs that sets just the right mood. The lyrics are not as important as the broody tension of the song. It’s the perfect backdrop for monster-hunting. In Chapter 2, Maggie heads up a mountain alone, looking for a monster that has kidnapped a little girl. It’s her job to rescue her, but Maggie knows that might be impossible.

“I follow the easy tracks, broken branches and grass shine, up the mountain for over an hour with no visual on my prey. I keep moving anyway, sure of my path. And for a moment, lost in the beauty of the waning sunlight and the steady rhythm of my breath, I forget I am here to kill something.”

I always think of this song as Maggie’s theme song. It’s discordant and jangly, a little unpleasant to the ears. It’s raw and honest and runs hot and cold. Tough, textured, and a little badass. Yeah, that’s my girl.

“I’m not the way that you found me
I’m never here or there
One day I’m happy and healthy
Next I ain’t doing so well.”

One of the key players in my novel world is Coyote, the infamous trickster. I’m quite fond of him in this novel, and he’s a scene stealer, so he definitely needed his own theme song.

“He wore a dapper gentlemen’s suit right out of the Old West. His shirt was a white high-collared affair, tucked into trousers that were striped an outrageous crimson and olive and gold. Over the shirt was a double-breasted vest of the deepest red velvet. It was topped off with a golden puff of a silk cravat, embroidered with delicate rose-colored thread. A gold watch hung from a chain tucked in his vest pocket, and over his shoulders spread a camel-colored topcoat with a thick gray fur collar. The coat flared out around him when he walked, like the mantle of a rogue king. He carried an engraved mahogany walking stick with a golden handle, and greeted me with a wide mocking smile and a tip of his top hat. He was every inch the gentlemen scoundrel from some old Hollywood Western.”

This last song sort of sums up a lot of elements of the story and is just plain fun. Plus, it’s got a post-apocalyptic rock’n’roll sensibility. I can see this playing on the jukebox at Grace’s All-American. Maggie sits at the bar, a whiskey in hand, and questions how the fuck she got herself into this mess.

“Why did love put a gun in my hand?

Was it for redemption?

Was it for revenge?

Was it for the bottle?

Was it for the ledge?

Was it for the thrill of pushing my hope to the edge?

Why did love, why did love put a gun in my hand?”

Rebecca Roanhorse is speculative fiction writer and Nebula, Hugo, and Sturgeon Award Finalist. She is also a 2017 Campbell Award Finalist for Best New Science Fiction and Fantasy writer. Her novel TRAIL OF LIGHTNING is the first book in the SIXTH WORLD series, followed by STORM OF LOCUSTS in 2019.

She lives in Northern New Mexico with her husband, daughter, and pug. Find more at rebeccaroanhorse.com and follow her on Twitter at @RoanhorseBex.