Nicholas Kaufmann is joining us today with his novel, Dying Is My Business. Here’s the publisher’s description.

Given his line of work in the employ of a psychotic Brooklyn crime boss, Trent finds himself on the wrong end of too many bullets. Yet each time he’s killed, he wakes a few minutes later completely healed of his wounds but with no memory of his past identity. What’s worse, each time he cheats death someone else dies in his place.

Sent to steal an antique box from some squatters in an abandoned warehouse near the West Side Highway, Trent soon finds himself stumbling into an age-old struggle between the forces of good and evil, revealing a secret world where dangerous magic turns people into inhuman monstrosities, where impossible creatures hide in plain sight, and where the line between the living and the dead is never quite clear. And when the mysterious box is opened, he discovers he has only twenty-four hours to save New York City from certain destruction, in Dying Is My Business by Nicholas Kaufmann. 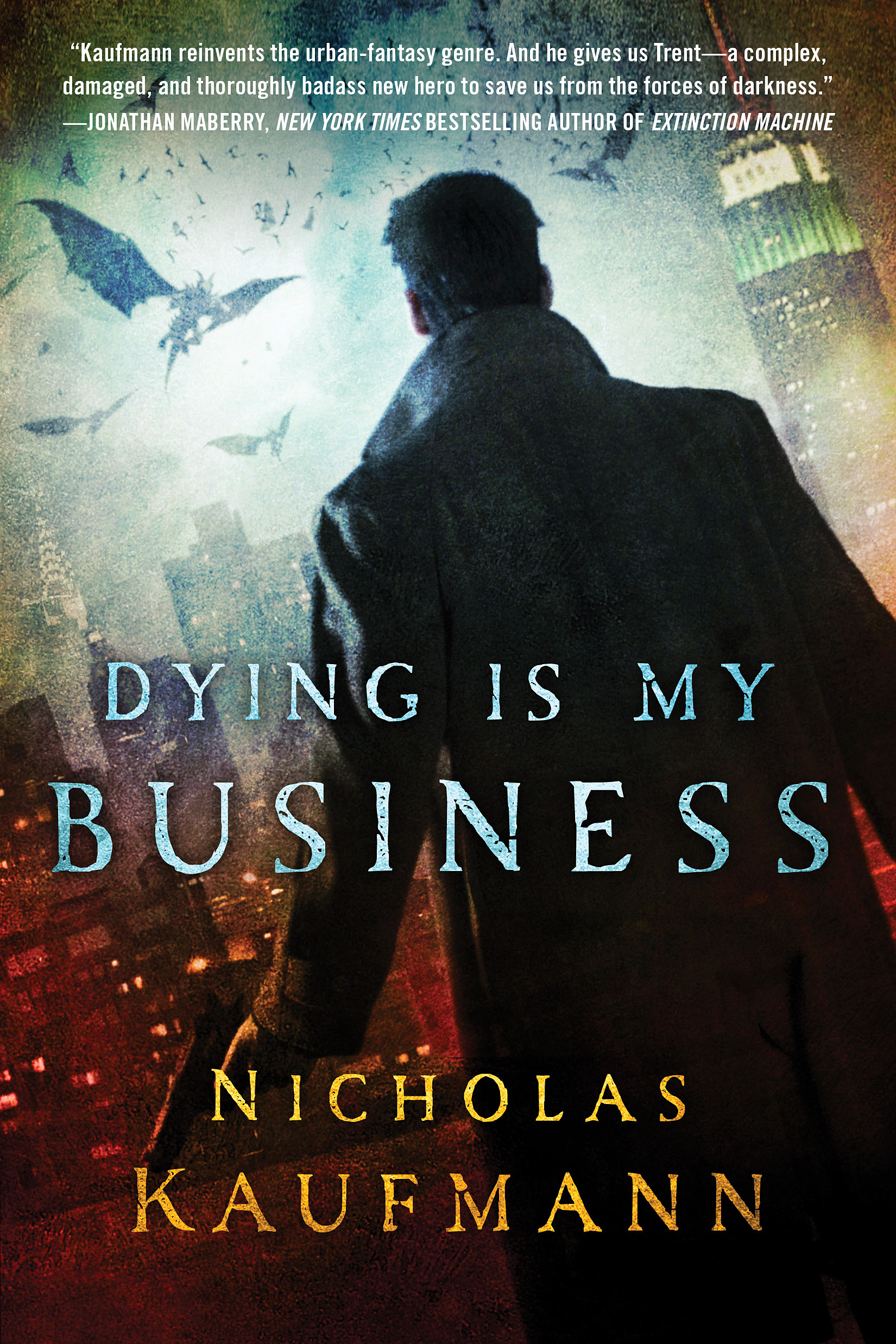 Mention the words “Renaissance Faire” to any group of people, even fantasy fans, and you’re likely to be greeted with groans and eye rolls. I can’t blame them. Heck, I used to be one of them. But lately I have developed a legitimate love of the Medieval Festival at Fort Tryon Park. In fact, it was a huge influence on my novel, DYING IS MY BUSINESS.

Every year in New York City’s Washington Heights, in the shadow of the Cloisters museum, the Medieval Festival hosts between 45,000 and 65,000 attendees in a single day. People come from all over to experience the pageantry of it, the costumes and jousting tournaments, the jugglers and aerialists, the madrigals and fight demonstrations. And of course, the giant turkey legs. Many of the attendees dress up, too, as knights or royals or fairies. Some dress as wizards, in robes and hats and flowing beards (some fake, some real). It was these wizards that got me thinking: What if a fantasy-flavored event like the Medieval Festival was intruded upon by the actual fantastic? This idea led me to set the climax of DYING IS MY BUSINESS at the Medieval Festival, which quickly became my favorite bit.

In the novel, Stryge, a giant, bloodthirsty Ancient–a race of powerful beings that walked the earth before mankind–is about to be resurrected. Our heroes are running out of time to stop it. They’ve traced Stryge’s tomb to directly beneath the Cloisters. However, when they arrive at Fort Tryon Park, they discover the Medieval Festival in full swing. Because magic and the supernatural are secret in this world, our heroes are forced to make their way through the festival without drawing attention to themselves, all while carrying real weapons and casting real spells. It doesn’t go well. The festival is attacked by two rival factions who are also searching for Stryge’s tomb: a vicious army of gargoyles (who live in a cave in the Palisades cliffs directly across the Hudson River) and a legion of revenants, reanimated dead bodies under the control of the necromancer Reve Azrael. The mission changes from getting through the festival without being noticed to getting out of there alive.

My most favorite bit of all comes when the gargoyles’ fearsome leader, the deadly, inhuman Black Knight, rides his steed onto the jousting field. As anyone who has ever been to one of these festivals can tell you, the jousting tournaments are a huge draw. Possibly the main draw. The bleachers are packed with people, and the crowds overflow into standing room only. It’s no different in the novel. The result is pandemonium, a mad crush of people fleeing for their lives. Trent, the novel’s protagonist, leaps onto one of the tournament horses, grabs a shield and a makeshift lance, and rushes the Black Knight–an echo of the jousting tournament that took place on the same field moments ago.

So what happens when the fantastic intrudes upon the Medieval Festival? In DYING IS MY BUSINESS, it unleashes drama, thrills, danger, lots of property destruction, and no small amount of casualties. Thankfully, in the real world, about the worst thing you have to worry about at the Medieval Festival is eating too much. Those turkey legs are huge!

Nicholas Kaufmann has had his work nominated for the Bram Stoker Award, the Shirley Jackson Award, and the International Thriller Writers Award. He is the critically acclaimed author of Walk in Shadows, General Slocum’s Gold, Chasing the Dragon, Still Life: Nine Stories, and Dying Is My Business. His short fiction has appeared in Cemetery Dance, The Mammoth Book of Best New Erotica 3, City Slab, The Best American Erotica 2007, Zombies vs. Robots: This Means War!, Dark Fusions: Where Monsters Lurk, and others. He used to write the “Dead Air” column for The Internet Review of Science Fiction. He lives in Brooklyn, NY, but you can visit him at http://www.nicholaskaufmann.com.